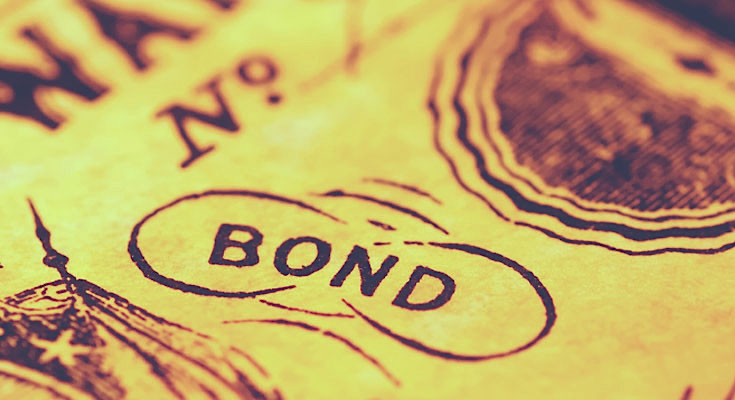 Overnight yields jumped by their largest margin since the Trump election win. In the past three weeks yields have risen 25 basis points and I suggested AMP could be a beneficiary of this reflationary trade. I still have targets back to $2.15 in the near-term.

But let’s consider what the real impact of rising yields have on stock markets during the different phases they enter, because this is important, and far too many professionals don’t understand bonds and their impact on other asset classes. After all, why did so many get caught piling into bonds at their highs?

Bonds are in a macro sense a barometer of how the market’s future impression of the economy is doing. It is not so much a relative game (equities vs bonds) but more a directional game (are bond yields rising or falling – and WHY?) that governs the impact on other asset classes. Speed also plays a part too. Anything rapid is unsettling.

Now the great thing for those that understand the messages that bond market send, is that equity markets in general have a considerable lag to reacting those messages. This allows equity investors to be “prepared”.

Below I show a chart of the S&P 500 overlaid with the US 10-year bond yield. This is a daily chart stretching back the past two-years so we can see the immediate effects of this relationship. Now, when bond yields rise I like to think of them in three phases – reversal, trend and extreme.

Reversal: is where bonds are in the phases of reversing a previous trend after reaching an extreme level. A perfect example is where we were a month ago. Bond yields were so low, that ended an extreme move and were beginning to reverse higher.

Trend: is the meaty part of a bond move which can incorporate either a steady ongoing steady persistent shift or even a longer period of stability with little direction. A great example is what was witnessed throughout the first 7 months of this year – the steady persistent decline in rates (the easiest trade of 2019).

Extreme: is where the trend is in the latter stages of a trend and is often incorporated with an acceleration in the trend as it moves into a peak or trough depending on the direction of the trend. The final collapse in bond yields (surge in price) over August is a prime example.

It will be easiest to go through these phases and how they directly relate to equity markets if we start on the left of the chart below in 2017. We can see here that bond yields (blue) are in a trend phase. Bond yields are first stable and beginning to grind higher – reflecting optimism to how the economy and stock market is performing. Equity markets begin to surge into 2018 and bond yields too begin to accelerate higher.

As bond yields accelerate the stock market begins to get nervous over rising bond yields and the impact they will have on consumer financing, housing loans, business loans etc. This extreme point is a reflection that from Dec 2017 to Jan 2018, bond yields jumped 40 basis points. Even though the stock market started to decline initially, bond yields still pushed higher adding to the equity market volatility.

This volatility over Feb to April was warned with the acceleration in bond yields.

After the volatility resets everyone’s positions the relationship begins once again. Bonds are stable, sentiment towards the economy and earnings is good and equities rally. Then in September bond yields begin to accelerate to the top end of their range and then pop through 3% convincingly into an extreme phase. Concerns the Federal Reserve will raise rates too high – stifling the US economy – equity markets begin to panic.

Bond yields need to fall a long-way to bring some stability back to equity markets. Again after everyone’s positions are reset, bond yields enter a trend phase – this time lower and only during short-term phases of rapid declines in concerns about the economy is when equity markets experience a pullback.

We can see now that as bond yields have shifted from a reversal stage (stopped falling and began to turn higher) to now entering a trend phase – yields steadily rising – up 25 basis points in three weeks. Expectations are that the lower extreme fall in yields will help stimulate the economy and resolutions to the trade war will also help. Good times. Equities rally.

But recall back to November 2017. The same thing was occurring, yields were rising with equities on a wave of positive sentiment into Christmas and New Year (generally a strong period for equities). However, the acceleration began too much for stocks to handle and they got smacked. 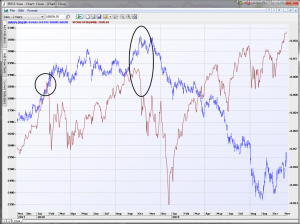 What investors need to watch out for now is a repeat of the 2017/2018 scenario where yields and equities pushed higher, with higher yields eventually creating a panic. That was late January 2018. A quick look at the weekly chart below shows some eerie similarities. IN 2017 – like 2019 – bond yields were in decline throughout the entire year and bottomed in the first week of September 2017. Bond yields bottomed in the first week of September 2017. Both yields and equities are moving in unison with equity markets enjoying an acceleration into record territory. A blow-off style rally into January is likely and if yields are another 20 -30 basis points higher, I am not sure equity markets will be all too pleased. Bonds moving into that extreme phase could be the trigger so be prepared.

Equally during this phase will also have an impact on gold prices as we also saw last night so investors who bought Silver Lakes (SLR) off my article Gold: Is It Time For Another Rally? may wish to take profits as it may now take until equities peak for gold to start rising convincingly again. 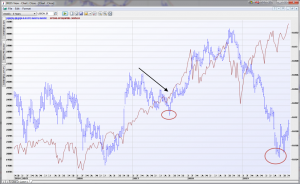