The surge has been driven by a combination of record low mortgage rates, multiple government home buyer incentives, government income support measures, pent up demand from the lockdowns, activity associated with a desire to “escape from the city”, a switch in spending from services to goods (including housing) and an element of FOMO (fear of missing out).

But momentum is continuing to slow

However, while the surge in prices has been big, the puff is coming out of the property market. Average dwelling price growth peaked at 2.8%mom in March and has slowed to 1.3%mom in November. Price growth in Sydney has slowed to 0.9%mom and in Melbourne to 0.6%mom. See the next chart. 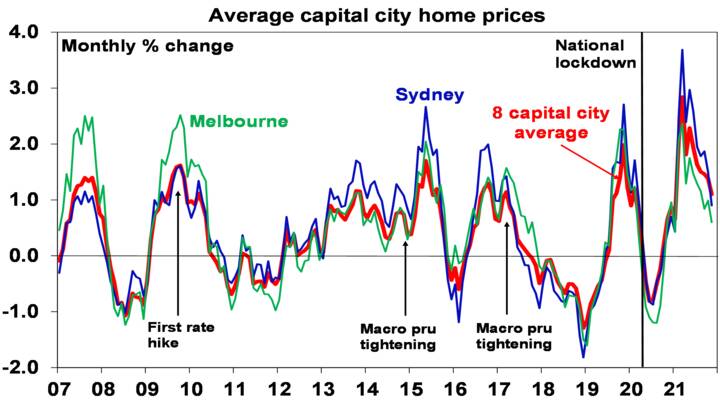 Consistent with this loss of price growth momentum, while auction clearance rates are still very strong, they have fallen around 10-15 percentage points from their October highs in Sydney and Melbourne. 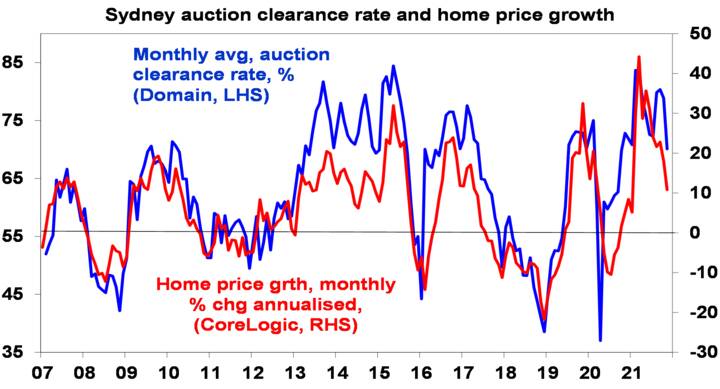 Of course, the slowing in national average price growth masks a divergence with previous laggard cities of Brisbane and Adelaide seeing their strongest monthly gains of 2.9%mom and 2.5%mom in November since 2003 and 1993 respectively. And average regional prices rose another 2.2% in November.

Five reasons to expect a cooling in the property market

At a national average level there are five reasons to expect a further slowing in average home price growth next year, followed by a peak in prices sometime in the second half of next year and falling prices in 2023

First – worsening affordability is constraining more buyers. Affordability has long been an issue in the Australian property market. The next chart shows real Australian home prices (average property prices after removing increases in consumer price inflation) indexed to start in 1926 at 100 (the red line) against their long-term trend (the blue line). 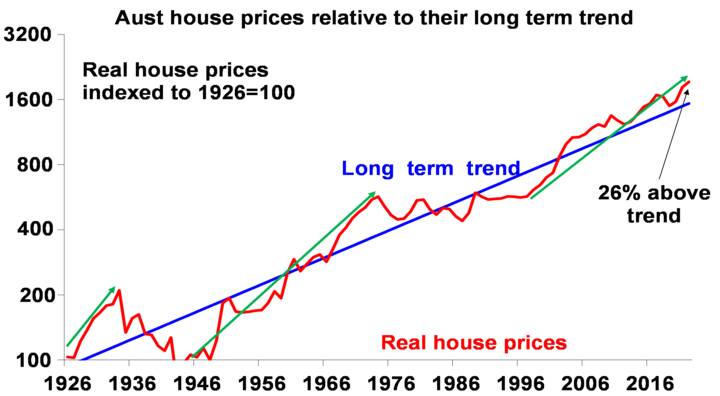 The current long term bull market in residential property has seen real prices rise from 23% below their long-term trend in 1997 to now being 26% above it. Over this period wages have increased by 106%, but home prices are up by 317%, which is nearly three times more. The property slump from 2017 provided a bit of a breather and saw prices fall back to nearer their long-term trend. This along with last year’s rate cuts and various first home buyer assistance measures enabled first home buyer demand to surge. But the rebound in prices over the last year has more than reversed this with prices up 22% but wages up just 2.2%. While interest rates are still low the surge in house prices relative to wages has gone hand in hand with a surge in the level of debt relative to incomes. That now means that it takes 8 years to save for a deposit in Sydney and 7 years in Melbourne. This is now squeezing out first home buyers yet again (which has seen their share of new housing finance fall from 25% to 18% since December) and increasingly existing owners looking to trade up are being squeezed out as well. This is particularly an issue in Sydney and Melbourne and partly explains their slowing relative to other cities.

Second – the supply/demand balance is starting to improve. Rising listings are at last adding to supply in the home buyer market. According to CoreLogic national auction numbers over the last week exceeded 4,000 for the first time. Supply is on the rise again reflecting pent up selling, the end of lockdowns and high prices. This could start to reverse the chronically low level of listings seen over the last 18 months. More fundamentally strong levels of home building (the red line in the next chart) over the last two years following the unit building boom since 2015, combined with the absence of immigrants – which has resulted in a slump in underlying housing demand (the blue line in the next chart) – have started to see the underlying supply/demand balance come under control (the green line). As such, we may at last be heading into a period of housing oversupply after years of undersupply. This of course assumes only a gradual return to pre-covid levels of immigration by 2025. A faster ramp up could reverse this. 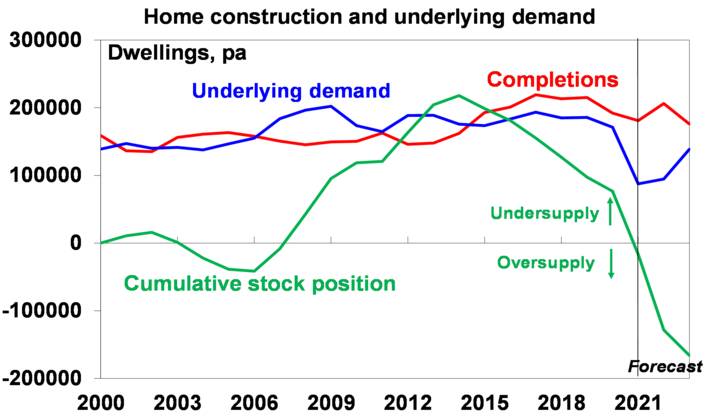 The cumulative stock position shows the accumulated gap between underlying demand & completions from when the market was roughly balanced. Source: ABS, AMP Capital

Third – rising interest rates will reduce the amount new borrowers can borrow and hence pay for dwellings. Fixed mortgage rates are already on the rise (with several banks increasing them by 0.5% or more) and the RBA is expected to start raising the cash rate (and hence variable mortgage rates) from late next year. Rising interest rates are likely to be a big dampener. The collapse in fixed rates to 2% or less played a big role in the recent boom. Fixed mortgages have accounted for 50% or so of new loans recently, so are far more significant than they used to be in impacting new buyer demand (even though there is no impact on existing fixed borrowers until they roll off current terms which may become an issue next year).

Fourth – macro prudential tightening is reducing the amount new borrowers can borrow and pay for homes. So far APRA has told banks to increase the interest rate serviceability buffer they apply to borrowing rates in assessing borrowers from 2.5% to 3% and are now moving to require banks to hold more capital for higher risk loans. The former will reduce the amount borrowers can borrow and the latter will raise the interest rate on or reduce the supply of higher risk loans. Further tightening measures are possible.

Finally – a rotation in consumer spending back towards services as reopening occurs (covid and the Omicron variant permitting) may reduce housing demand.

With national average home prices up by 20.9% year to date they are on track for a 22% rise this year. Prices in Sydney are up 25% year to date and are likely to be up by 26% this year. However, as noted earlier, this masks a sharp loss of momentum since March as a result of worsening affordability, rising supply, rising rates, macro prudential tightening and some eventual rotation in spending away from housing. We expect a further slowing in home price gains to 5% in 2022, with prices likely to start falling from around September/October next year resulting in a 5 to 10% decline in prices in 2023.

First, with Sydney and Melbourne home prices having led the charge over the last decade (see the next chart) and suffering from worse affordability, they are likely to come in a bit weaker than average over the next two years. Whereas laggard cities like Brisbane and Adelaide and possibly Perth and Darwin are likely to be relative outperformers. Regional prices may also continue to benefit from the work from home phenomenon and desire for a better lifestyle.

Second, the main downside risks to our price forecasts would be if a renewed deterioration in covid (due say to Omicron or another variant) results in a more debilitating economic slump of if a faster pick-up in inflation necessitates rapid interest rate hikes next year. The main upside risk would be if immigration is quickly ramped up to above pre-coronavirus levels resulting in a renewed property supply shortfall – this could result in another year or rising prices in 2023.

Finally, we remain of the view that we may be getting closer to the end of the 25-year bull market in property prices: the 30 year decline in mortgage rates is likely over so this tailwind for property prices thats enabled people to keep borrowing more to pay more for houses is likely over; strong home building in recent years, the collapse in immigration over the last two years & only a gradual recovery in immigration ahead could remove the chronic undersupply of property; and the work from home phenomenon may take pressure of capital city prices.