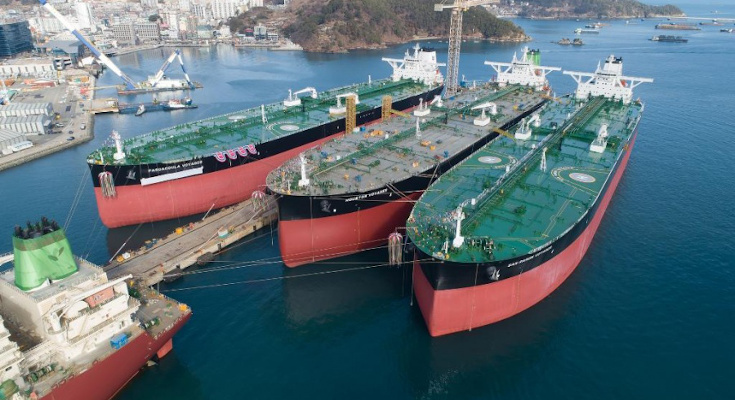 In a zero-sum game, where one group loses another must-win. The winners of this collapse in oil are those with storage infrastructure. The highest leverage to oil storage are the crude oil shipping fleet led by the Very Large Crude Carriers (VLCCs). With demand for oil collapsing and OPEC ensuring supply is plentiful, global storage of crude is becoming a scarce commodity making these vessels invaluable.

On the 8th of March, Saudi Arabia initiated a surprise price war with Russia triggering a record 35% one day fall in the price of oil.  This came after Oil had already fallen 30% in 2020 due to demand concerns from COVID-19.  The winners of this collapse in oil are those with storage infrastructure. The highest leverage to the rising cost of storage for crude are the owners of oil tankers.

The players in the oil tanker market is overwhelmingly dominated by Greek and Norwegian family-run companies; from the Onassis’s in Greece to John Fredriksen from Norway. Scattered amongst these billionaires are the publicly listed operators such as Euronav and DHT on the New York Stock Exchange.

The crude oil tanker market is leveraged on growing supply from both an earnings perspective as well as from a vessel valuation. Typically growing supply of oil is a result of growing demand and robust prices. Hence there is a perceived correlation to oil prices, but oil prices do not cause tanker rates to rise, vessel utilisation does.

Examples exist where, in depressed oil price environments, oil tanker rates can outperform. When oil supply significantly exceeds oil demand (as is the case currently), the future price of the commodity becomes more expensive than today. The result being that you look to make a profit by holding a barrel of oil now and delivering it into the higher future prices. There is a cost of both financing and storage, but should that future price be much higher than the cost of both storage and financing, you would choose to store it rather than sell now.

The cheapest cost of storage is land-based in a tank. When that is fully utilised, then it hits the water in floating storage on VLCCs. Therefore, a VLCC becomes the marginal storage method up to the point that storage economics stop working and the contango is gone.

The marginal cost of storage is highly variable too given how volatile oil tanker day rates are, particularly when considering seasonality. Over recent weeks we have seen prices move below the all-in cost of a vessel at $20,000 per day during softness in February, to over $300,000 per day for late March. The spike in late March was driven by the Saudi discounting and a scramble from global refineries to secure cheap cargoes at $8 below the benchmark, even if they had to pay $3 or $4 per barrel in transport.

This rush then gave way to the rise in demand for floating storage which has helped sustain rates above $150,000 per day, a $130,000 per day margin per vessel on a fixed cost asset. To date there have been several medium-term charters of 6-12 months for vessels to move into storage which have helped to increase the utilisation of the global crude shipping fleet.

While the oil market remains grossly oversupplied, the storage trade will exist. With OPEC and non-OPEC production cuts being considered, this would normally weigh on the value of the storage trade, however, cuts need to happen now to reduce the economics. In addition, even if they do occur today, the market demand is so poor currently there is still going to be a need for storage which is currently filling up by 10 percentage points of utilisation every week, this is under a production cut scenario. In under 10 weeks, storage is likely to be fully exhausted.

Some concerns exist on how storage unwinds and what it means for vessel earnings. However, it is worth considering that on average, publicly listed shipping companies has an average fleet age of around 7 to 8 years versus a vessel life of 20 years. It is also worth reflecting on the multiple on both earnings and dividend yield that is implied by varying day rates (assuming an 80% net profit payout ratio as many have targeted). Between $70,000 to $90,000 per day, the price to earning is just 1.4 to 2.5 and the yield is between 50 to 90%.

Even at the end of 2020, heading into 2021, they will have lives in excess of 10 years and lower net debt, including lower loan to value ratios (LVRs), as 20% of profit will be going to debt amortisation. Therefore, while the outlooks for 2021 may be somewhat dour as oil is removed from inventory decreasing shipping utilisation, the profits from 2020 overwhelmingly support you through a leaner period.

It would also be reasonable to assume that through 2021 we should see global demand bounce back from the COVID-19 lows, supported by significant global stimulus efforts. Oil prices should then be incentivising supply growth. If rates soften, older vessels will be scrapped as they exit the storage trade. With limited new vessels on order and record low deliveries for 2020 and 2021, there remains the prospect of a fundamentally tighter market through 2022.

1) 2020 will likely be a record year for shipping profits coupled with significant dividends; and

2) that profits will significant over 4 of the next 5 years as the market normalises from the severe demand drop of 2020.

With PEs in the low single digits and dividend yields over 50%, patient shareholders will be rewarded with either substantial capital gains and/or dividend income.