“O Gold! I still prefer thee unto paper, which makes bank credit like a bark of vapour.” — Lord Byron

One of the most pleasing aspects of gold’s strong recent price performance is the fact that the metal has been making both higher highs and higher lows since mid-August 2018. 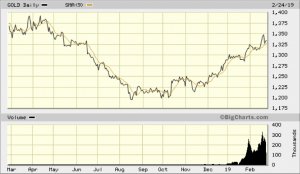 When the price dropped to below the $1200 per ounce level, the metal had fallen victim to both a combined rally in the US dollar and prospects of further US interest rate rises. What was then a hawkish and aggressive US Federal Reserve (a sharp contrast with the situation now) had just added another interest rate hike to their agenda for 2018.

As we’ve previously discussed, an environment of both a rising dollar and rising interest rates, tends to be a toxic one for the gold market.

Over the weeks and months that followed, the US dollar continued to rally, whilst the Fed followed through on its promise to increase the short-term interest rate.

But gold’s price performance in the wake of this scenario proved defiant. The price of gold bottomed just below $1200, then rallied in the face of factors that could (should?) have taken it to much lower levels.

In the graphic below of the relative performance of both gold and the US dollar over the past 12 months, we see the strong recovery in gold since August 2018. 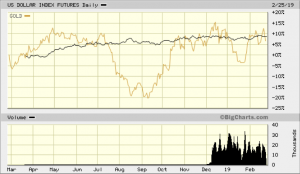 The price action in the gold futures market from August 2018 through to February 2019 has thus revealed significant underlying strength and resilience in the precious metal. For the fourth straight month in January, both the price of gold and gold mining stocks posted strong gains. Gold ended January at a nine-month high, and with the U.S. dollar expected to lose momentum due to higher deficit-spending, prices could surge to as high as $1,400 or even $1,500 an ounce during 2019.

One of the key factors driving this gold price resilience has been the actions of the world’s central banks. 2018 was a watershed in terms of the scale of official gold purchases, as banks added 651.5 tonnes (worth some $27.7 billion) to their holdings, according to World Gold Council (WGC) data. During Q4 2018 alone, central banks purchased as much as 195 tonnes, the most for any quarter on record, according to leading precious metal research firm GFMS.

These central bank purchases represent a 74% jump from 2017 and also the most on record going back to 1971, when President Richard Nixon brought a formal end to the gold standard.

This is symbolic of a much broader program of central bank gold buying that has led to central banks being net gold buyers since 2010, as they seek to diversify their reserves away from the US dollar.

Now, whilst most Western nations already have a comfortable weighting in gold relative to their total reserves, this isn’t the case in emerging markets. So the biggest purchasers of gold during 2018 were Russia, Turkey and Kazakhstan, with China adding to its holdings for the first time since 2016. Meanwhile, Hungary, Poland, India and a number of other countries took deliveries for the first time this century.

In the USA, gold’s represents 74% of the nation’s reserves and the Federal Reserve has historically maintained the largest position amongst global central banks. Other countries lag far behind in terms of diversification, with Russia holding the fifth-most gold in the world at 2,066.2 tonnes – representing only 17.6% of its total reserves. In sixth place is China, with its reported holdings of 1,842.6 tonnes representing a very small 2.3% of its reserves.

What this tells us is that if emerging nations want to better diversify their foreign reserves, they need to purchase a lot more gold!

Our final graphic below illustrates how well gold is performing against a host of other investment options, including currencies, bonds, stocks and commodities. 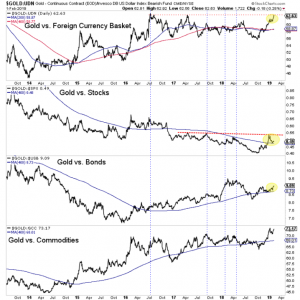 Gold has performed strongly since its August 2018 low, hitting a 10-month high during February 2019. The price has strengthened as the US dollar has plateaued and the prospects of Fed rate rises diminish for the foreseeable future. We’ve seen central banks as net gold buyers since 2010 and they splurged during 2018, with purchases up 74% on the year before. During Q4 2018, central bank gold purchases set a quarterly record, reinforcing gold’s turnaround. Gold’s price strength is set to continue, with prices likely to trade between $1300 and $1350 in the near-term, and potentially as high as $1400 during 2019.