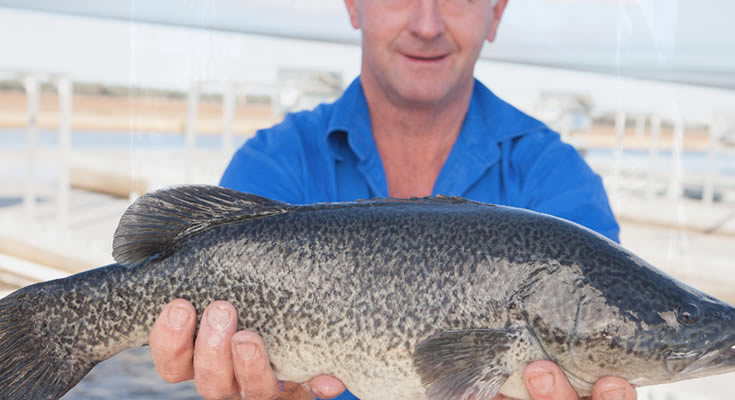 For a sector that has heaped heartbreak on investors over the years, ASX-listed seafood exposures now present an ocean of choice to investors. Most of the expanding school of piscatorial plays are export-oriented – or aspire to be – and leverage Australia’s image of having pristine waters.

With an $810m market cap, Tasmanian salmon producer Tassal (TGR, $4.53) is the leader in the ASX pool. But as with fellow Taswegian producer Huon Aquaculture (HUO, $4.70). But there are plenty of tiddlers to choose from, at a time when Tassal and Huon deal with ongoing pollution issues.

As far as “mortality events” go, it’s hard to overlook the demise of an estimated one million fish – notably Murray cod – in the Darling River system because of low oxygen levels apparently resulting from drought.

As is the Australian way, the mass extinction is the subject of much finger pointing and several government-commissioned inquiries.

Not surprisingly, the Griffith-based Murray Cod Australia fielded numerous queries from investors concerned about the quality of the company’s water for its pond-based operations. Chairman Ross Anderson assured them the water was sourced from the Murrumbidgee river system. “As much as these events are deeply distressing to all involved, they have no impact on (the company’s) for this year or coming years,” he said.

The company’s current inventory consists of 840,000 fish across 16 dams, but the company plans for a 35-dam super site this year.

Murray Cod sells mainly sells in Australia but recently sold in Japan and plans to export to the US.

“I’m not doing ‘best fish at ten paces’ but I genuinely think it’s the best fish in the world,” he says of Clean Seas’ tuna, harvested across several leases in the Spencer Gulf.

Well he would say that, wouldn’t he? But Head does have third party endorsement after the company’s reps knocked on the kitchen doors of 2000 leading chefs including belligerent British pan wielder Gordon Ramsay, who declared Clean Seas’ product to be “f%&*ing delicious”

More than 40 percent of the great chefs of the world said they were happy to use the product, which is being served in restaurants including Sydney and Melbourne’s Sake, Melbourne’s Aria, London’s Zuma and, of course, Gordon Ramsay.

Clean Seas’ growing output and its (modest) profitability belies a dark history for the company, which at one time claimed to have discovered the secret to captive breeding of southern bluefin tuna, the Rolls Royce of sushi ingredients.

Sadly, it hadn’t. The company turned to yellow finned kingfish, but then had a problem with unacceptable mortalities. The fishy fatalities are the subject of an ongoing legal claim against a former feed supplier, Gibson’s.

Clean Seas also targets sales of $47-50m, 18 percent higher than previously with “further double digit sales growth expected to continue in 2019-20 and beyond”.

The company late last year signed a deal to sell its “exceptionally high quality” yellowtail kingfish to China, following a distribution agreement with one a premium seafood distributor.

As with the other piscatorial stocks, Clean Seas plays on the global dynamics of soaring demand at a time when wild fish stocks have peaked and in some cases are being rapidly depleted.

Long suffering investors are yet to buy the Clean Seas story, with the shares marking time over the last 12 months.

Clean Seas had cash of $2.23m at the end of the September quarter, which may be too close to comfort for some punters.

Seafarms is already Australia’s biggest farmed prawn producer, having operated from its Cardwell facility in northern Queensland since 1988. Last year, the company produced 1500 tonnes of black tiger and banana prawns.

But Seafarms has bigger fish, er, prawns to fry, having started earthworks on converting Legune Station (near Darwin) to a massive black tiger prawn facility across 10,000 hectares, capable of producing up to 100,000t annually.

Currently a cattle property, Legune is based on coastal flood plains and that’s what makes it amenable to prawn farming.

Dubbed Project Sea Dragon, the venture is costed at $1.5 billion over a staged seven-year development. Backers include the offtake partner and 14.99 percent Seafarms shareholder Nissui, a global seafood giant. The NT, WA and Commonwealth governments have also been supportive with measures such as road upgrades.

“There have been many doubters that the project would not get to this stage,” says chairman Ian Trahar, who notes the project’s potential to produce $3bn of annual export revenues.

Operating under the Crystal Bay brand, Seafarms last year turned over $35m of revenue but produced a $19m loss, the result of investing in the NT project ($85m to date). The mainstay Queensland ops are expected to produce $5.5m of underlying earnings this year.

Angel reported a $1.1 million loss on revenue of $1.5m million in the 2017-18 year, but in the September quarter revenue had ticked up to $1.1m for that stanza. Given the demand dynamics and the low contribution of farmed product to the market, the world should be Angel Seafood’s oyster.

Let’s not forget abalone – Asian markets certainly don’t – and the role of Ocean Grown Abalone (OGA, 15c) in farming the slow-growing delicacy on artificial reefs at Flinders Bay at Augusta in Western Australia.

In a recent development, Ocean Grown struck a collaboration deal with the WA government to increase the number of these reefs (called abitats) from 10,000 to 15,000. This will enable the company to increase greenlip abalone output from a current maximum of 200 tonnes a year to 300t.

Investors are yet to warm to this one, with Ocean Grown shares drifting from their November 2017 listing price of 25c a share.

Still in WA, Mareterram (MTM, 19c) trawls the heritage-listed Shark Bay (800 km north of Perth) for prawns and scallops but once again its shares have been off the pace.

One reason is that last year’s prawn haul of 540 tonnes compared with 830t. On the flipside, the company is enjoying higher prices and valuation wise the company’s $26m market cap exceeds the value of its fishing permits alone.