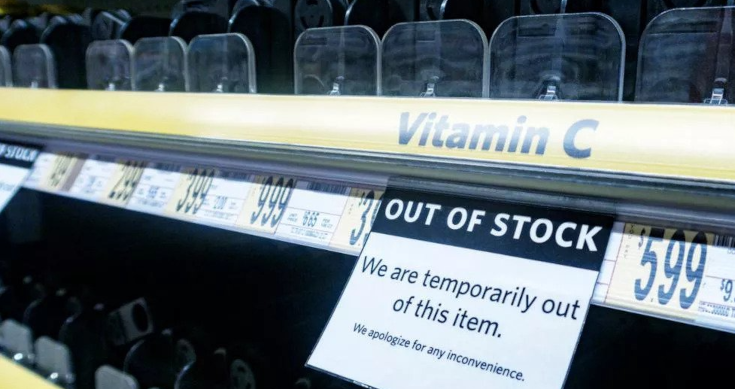 Abbott Nutrition, which controls 48% of the US$2.1 billion US infant-formula market, in February recalled three product categories and closed a plant in Michigan after four babies who had consumed its powdered milk became sick with life-threatening bacterial infections even though there was no proven link.[1] By May, the US had a shortage of baby food – as in bare shelves (a nationwide out-of-stock rate of 43%),[2] panic buying, parents resorting to dangerous homemade remedies,[3] and infants hospitalised because not even doctors could obtain the specialised formula they needed.[4]

That such a wealthy country has a shortage of baby food symbolises how the world is dogged by scarcity. The global manufacture and distribution of basic, essential and technological goods is muddled. The world’s food supply can’t get to everywhere it’s needed. Countries reliant on imported energy are vulnerable. At an industry level, automobile production is hampered by a lack of parts. Industrial revenue has dropped due to a backlog of orders. Restaurant margins are under pressure. Retail is lacking stock and staff. Building is delayed. Tech companies lack the essential components. Some niche industries such as ‘fast fashion’ (online-clothing sales driven by Instagram influencers) face collapse.

Supply is snarled for (at least) eight reasons, and the damage is magnified because many are occurring at once. The first and underlying problem is that supply lines are too precarious. One hiccup in these over-complicated, sprawling and self-organising production networks causes a shortage. Outsourcing and specialisation taken to the nth degree have meant that multinationals don’t even know who are their suppliers. About 70% of 300 companies surveyed by India-based Resilinc Solutions in 2020 couldn’t identify their suppliers in China just after covid-19 became apparent.[5]Adding to the mess is that an overreliance on China, just-in-time production, minimal inventory practices and high industry concentration reduce the margin of error for supplies. Even before the crisis in the four-producer US infant-formula market was apparent, a US Department of Agriculture report in February listed tackling industry concentration as “priority one” of six to strengthen the US food supply.[6]

The second reason for shortages is climate change. Floods in China, heat waves in India and droughts in the US – more locally, heavy rain and not much sunshine in Queensland – mean crops are failing to enjoy the temperate weather needed for good harvests. Climate-change-related blows to food in storage (electricity failures that lead to a loss of cold storage) and damage to transport infrastructure “could significantly decrease availability and increase the cost of 22 highly perishable, nutritious foods such as fruits, vegetables, fish, meat, and dairy,” the UN Intergovernmental Panel on Climate Change warned in March.[7] The other side to climate change is that its solutions are naturally hostile to investment in fossil-fuel production, and oil, gas and coal shortages loom when there is no foolproof replacement.

The third reason is a scarcity of labour. Low unemployment means companies are struggling to find enough qualified workers. So firms are forced to cut production. In the US, for every two job openings in March, there was only one unemployed person.[8] A lack of workers has added to shortages when it has manifested as a disruption to transport. Think not enough truck drivers.

The fourth reason is ‘chipageddon’, the term for a lack of microchips over the past two years because demand has outstripped global production capacity. Since a piece of silicon that contains nanoscopic electronic circuits component powers so many goods these days, the result is a shortage of everything from lightbulbs to cars to medical devices.[9]

A fifth reason for shortages is the tension between China and the West that is impeding trade and investment – Intel CEO Pat Gelsinger in 2021 said Beijing-Washington strains made it hard for chipmakers to expand production.[10] As well as deterring investment, the politically driven impediments include export bans, tariffs and import quotas.

Another reason for the shortages (especially of microchips) is covid-19. Lockdowns and logistic disruptions especially at ports hammered production and jammed container deliveries by ship and truck at a time when government stimulus boosted demand for goods. Freight costs rose so much companies such as Costco, Home Depot, Ikea and Walmart found it cheaper and more reliable to hire ships. China’s ‘zero-covid’ response this year to the Omicron strain is bound to extend ‘Made in China’ shortages.

The seventh reason is Russia’s attack on Ukraine, two countries that account for 12.4% of calories traded, much of it to poor countries.[11] Western sanctions to punish Moscow are denying European businesses the Russian oil and gas they need to operate. Blackouts are possible, as are factory closures.[12] The sanctions are blocking the export of the fertiliser that helps farmers worldwide maximise crop output. In Ukraine, the fighting, Russian plundering and sabotage of rural production and Moscow’s siege of Black Sea ports are blocking the export of grain staples.[13] Many warn of a global famine. The head of the UN’s World Food Programme in May cautioned that hundreds of millions of people are “marching to starvation” in what could rank among the worst humanitarian disasters since World War II.

The last reason given here for the shortages is fear of shortages. The panic-driven hoarding that emptied supermarkets of basic goods at the start of the covid-19 pandemic is reappearing in other forms. The US-based International Food Policy Research Institute said by early April at least 16 countries had banned export amounting to 17% of traded calories to stockpile local supplies. The list includes India outlawing wheat exports and Malaysia forbidding poultry trade at a time when 80% of the world lives in countries that are net importers of food.[14]

The shortages behind delays, waste, forgone production and lost sales come with notable macroeconomic and political consequences. Economic growth will be lower than otherwise and inflation higher because scarcity makes prices much more sensitive to demand. Even if demand is steady, interruptions to the supply of goods result in the ‘supply-side’ inflation that central banks can do little to subdue. At the same time, high demand for labour leads to wages-price spirals that enshrine inflation, though at least central banks can calm an overheated labour market with rate increases. But the combination of reduced demand to subdue wages inflation, forgone production from supply shortages and hard-to-suppress supply-side inflation is stagflation.

The political consequences of shortages and inflation are the protests directed at authorities that litter history, most prominently when hunger is driving the anger. Sri Lanka’s deadly political turmoil and economic collapse is the latest example; all the more tragic because a government decision in 2021 to ban fertilisers and pesticides created a famine.[15]

In a world of shortages, how can businesses and policymakers help? Governments are pondering sending in navies to get produce through the Black Sea. So far, too risky. More mundane decisions include that officials can reduce the amount of grain used in biofuels to help the world can feed itself.[16] Policymakers could prioritise fomenting another ‘Green Revolution’ by encouraging the adoption of ‘agritech’ to boost crop yields.[17] Business options include proper mapping of their suppliers, ‘reshoring’ and diversifying sources. Firms can use shorter shipping routes, undertake more frequent stock updates, pre-order and manage inventory levels more prudently. Truth is there are no quick solutions. The age of scarcity will pass but not for a while and not before it has shaken the world.

To be sure, the ‘everything shortage’ is an exaggeration. Many would say that capitalism responded brilliantly to a surge in demand for medical and durable goods during the pandemic.[18] Policymakers are exaggerating the inflationary effects of shortages to shift blame from the excess demand they created with their fiscal and monetary stimulus during the pandemic. The worst appears over for shipping disruptions – peak dislocation seems to have been late last year. Same too for chip production, according to car makers,[19] while US retailers are complaining of too much inventory. But that’s due to a drop in demand. Governments are taking action. Washington in June used emergency powers to solve a logjam of imports of modules and components for the solar-power industry.[20] But businesses immediately said this action would impede their efforts to boost domestic production.[21]

Whatever the best way to ensure the US advances solar power, governments have the lesser role in solving today’s shortages because their conventional economic tools are of little use. By and large, scarcity is a problem that business needs to solve. Babies depend on it.

In 2019, Sri Lankan President Gotabaya Rajapaksa unveiled “Vistas of prosperity and splendour,” his vision for the island nation that had long been self-sufficient in food. Among many goals was one to “promote and popularise organic agriculture during the next 10 years”.[22] In April 2021, Rajapaksa embarked on the world’s greatest organic farming experiment when he suddenly banned the importation of chemical fertiliser and pesticides and ordered farmers to go organic without any help from imported organic fertiliser.[23]

The results are tragic. Within six months, Sri Lankan rice production plunged 20% and rice prices soared 50%. The government was forced to import rice and ease the ban on chemicals.[24] But coupled with the pandemic’s blow to tourism, the loss of tea exports to Russia and rising oil import prices, the U-turn wasn’t enough. Sri Lanka has collapsed economically and politically. (Rajapaksa was ousted in May.)

To some extent, Rajapaksa’s shift to organic farming was a reversal of the great advances in farming in the 1960s when emerging countries adopted modern techniques.[25] Led by US scientist Norman Borlaug who won the Nobel Prize for Peace in 1970 for sparking the Green Revolution, crop yields surged, often doubled, across developing countries, especially the Indian subcontinent, thanks to the introduction of “higher-yielding short-strawed, disease-resistant wheat” that demanded the use of fertilisers and pesticides.[26]

Organic farming produces up to 50% less food per hectare than conventional farming because it requires farmers to rotate soil out of production for pasture, fallow or cover crops.[27] Amid warnings of a global famine due to a fertiliser shortage and adverse weather, the world needs another technologically driven Green Revolution.

Adversity spurs innovation.[28] If babies and others are in want, watch for technological advances in farming to ensure the world can feed itself again.

[5] Thomas Y. Choi, Dale Rogers, and Bindiya Vakil. Coronavirus is a wake-up call for supply chain management.’ Harvard Business Management. 27 March 2020. hbr.org/2020/03/coronavirus-is-a-wake-up-call-for-supply-chain-management. The article notes that a Japanese semiconductor manufacturer told Harvard researchers it took a team of 100 people more than a year to ‘map’ the company’s supply networks after the earthquake and tsunami in 2011.

[12] Russia has restricted gas exports to Bulgaria and Poland in April over their refusal to pay in roubles and on Finland due to its application to join Nato. Russia is the world’s biggest exporter of fertiliser and within a month of Russia’s attack on February 24, Nola urea, a key fertiliser, had surged 60% to a 34-year height of US$880 a ton.

[17] ‘Agritech’ is the modern term for technology solutions to boost crop yields.  The term covers ‘agplastics’ for when plastic is used in farming for drip irrigation, coverings and much more. It enfolds genetically modified crops and hydroponics and other soil-less farming techniques. Included too are autonomous sprayers, driverless tractors, drones, imaging devices to detect diseases, laser soil analysis, microbes that boost plant growth, robot fruit pickers, vertical farming and the use of artificial intelligence and data sharing to power ‘agrobots’.

[20] The White House. ‘Declaration of emergency and authorisation for temporary extensions of time and duty-free importation of solar cells and modules from Southeast Asia.’ 6 June 2022. whitehouse.gov/briefing-room/statements-releases/2022/06/06/declaration-of-emergency-and-authorization-for-temporary-extensions-of-time-and-duty-free-importation-of-solar-cells-and-modules-from-southeast-asia/

[23] US Department of Agriculture. Global Agricultural Information Network. ‘Report name: Sri Lanka restricts and bans the import of fertilisers and agrichemicals.’ 28 May 2021. apps.fas.usda.gov/newgainapi/api/Report/DownloadReportByFileName

[27] Bjorn Lomborg. ‘Organic farming is turning a food crisis into a catastrophe.’ The Australian. 4 June 2022. theaustralian.com.au/inquirer/organic-farming-is-turning-a-food-crisis-into-a-catastrophe/news-story/944625bd3168b212eddccadeaed82640