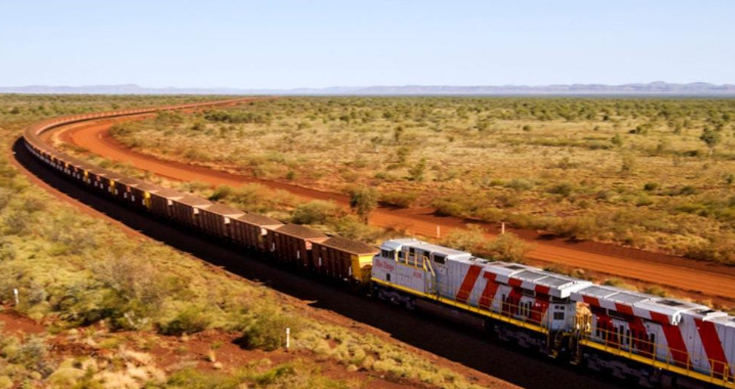 A weak production report for the March quarter from Rio Tinto so far as its Pilbara iron ore operations are concerned.

The world’s top iron ore producer reported a drop in exports in the company’s quarter thanks to delays to expansion projects in the Pilbara and operational problems at its mines.

But it suggested in the report that improvements would see volumes should rise in the second half. That suggests the performance in the current June quarter could underwhelm again.

Total shipments for the quarter from its iron ore operations in WA’s Pilbara were 71.5 million tonnes the company said in its March quarter production and sales report.

“”Iron-ore prices have been volatile, with the Platts 62% Fe index up 33% at the end of the first quarter ($US58/dry tonne). Since late February, supply concerns due to the war in Ukraine has outweighed muted demand growth and a crackdown on speculative trading behaviour in China. China’s economy is getting a boost with infrastructure spending, but Covid-19 lockdowns pose downside risks to near-term construction activity,” Rio said in the report yesterday.

So far as production is concerned, Rio said its Pilbara operations “had a challenging first quarter, as expected” with the 71.7 million tonnes (100% basis) output from the mines 6% lower than the first quarter of 2021.

“We expect increased production volumes and improved product mix in the second half with the commissioning and ramp up of Gudai-Darri, commissioning of the Robe Valley wet plant and improved mine pit health,” the miner told the market in its report.

The consumption outlook is clouded with concerns over economic growth as China grapples with a resurgence of COVID-19. Meanwhile, the industry also faces risks of further government intervention amid mounting inflation pressure.

Chinese crude steel output fell more than 6% in March to 88.3 million tonnes and in the three months to March it fell a much steeper 10.5% to 243.38 million tonnes.

There are numerous reports that many Chinese steel mills (especially on the east coast) have been shut or locked down in recent weeks which could see a further fall in production and perhaps exports from Australia this month and quarter.

The Chinese government said this week it is cut steel production even further than the 3% trim seen in 2021. If output is maintained at the first quarter rate (and the Covid outbreak makes that problematic, as does the sliding property sector), total production for the year would come in around 970 million tonnes against the 1.033 million last year and 1.065 million in 2020.

Like all companies, Rio is facing higher costs (even if it and other miners get a 25% rebate of the diesel costs) “Recent input cost increases are the largest raw material cost hike since the Oil Crisis in 1973,” Rio said in its quarterly statement.

Depletion of existing mines reserves was not offset by replacement projects because of delays in commissioning, while labour issues caused by pandemic constraints also contributed to the challenges at Pilbara operations, the company said.

Rio said bauxite production of 13.6 million tonnes for the quarter was in line with the first quarter of 2021 with “similar wet weather disruptions as the corresponding period.”

Aluminium production of 700,000 tonnes was 8% lower than the first quarter of 2021 due to reduced capacity at our Kitimat smelter in British Columbia following the strike which commenced in July 2021.

“Preparations continue for the Kitimat smelter to progressively restart from June 2022 with full ramp up expected by the end of the year. All our other smelters continued to have stable performance, despite considerable challenges related to unplanned employee absences due to COVID-19.

“As a result of the Australian Government’s sanction measures, we have taken on 100% of the capacity and governance of Queensland Alumina Limited (QAL) until further notice.

“QAL is 80% owned by Rio Tinto and 20% owned by Rusal. Our focus remains on ensuring the continued safe operation of QAL, as a significant employer and contributor to the local Gladstone and Queensland economies,” Rio said on Wednesday.

Mined copper production was down 5% on the prior quarter at 125,500 tonnes, but up 4% from the first quarter of 2021. That performance was “due to higher recoveries and grades at Kennecott, partly offset by lower grades at Oyu Tolgoi and lower throughput at Escondida.”

Rio said it still expects first sustainable production from the Oyu Tolgoi underground project in the first half of next year.

The company said market expectations for the company have been revised downwards amid sustained high inflation, the outbreak of the Russia-Ukraine war, and a resurgence of COVID-19 lockdowns in China.

“Further downside risks include a prolonged war and other geopolitical tensions, extended labour and supply shortages, and monetary policy adjustments to curb inflation,” according to the statement.

Rio’s quarterly made no mention of the future of the huge, $US2.4 billion Jandar lithium project in Serbia. It did mention the move into Argentina in the quarter via the acquisition of the Rincon lithium project for $US825 million.

“Rincon is a large undeveloped lithium brine project located in Argentina – the heart of the Latin American lithium triangle,” Rio said. Jandar was conspicuous by the absence of any mention.

And on battery metals, Rio had this to say:

“Lithium carbonate prices have more than doubled in the first quarter and seen a six-fold increase year on year. Nevertheless, mine supply growth should pick up due to the ramp up of idled mine capacity and new projects coming online, especially in Australia,” Rio said in the report.