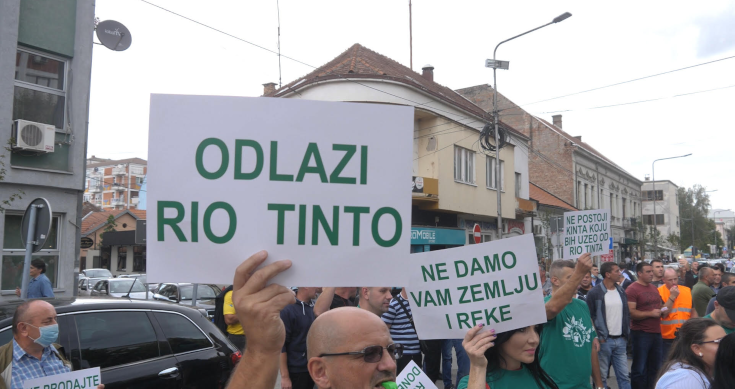 All eyes inside Rio Tinto will be on tomorrow’s Serbian elections as the global mining giant waits to see if its ambitions for a $US2.4 billion lithium mine and processing operation in that country are confirmed or finally dashed.

In late January the Serbian government revoked the lithium mining licences granted to Rio after growing opposition to the company’s plans.

Ana Brnabić, the Serbian prime minister, said all decisions and licences regarding Rio’s plans had been annulled because of environmental concerns.

The decision in effect pulls the plug on a potential $US2.4 billion investment by Rio in developing the country’s lithium resources, which could have made Serbia one of the world’s biggest producers of lithium, especially for the huge European car and battery markets.

It could be that Rio’s silence is a conscious attempt not to antagonise the Serbian government and opposition and turn the proposed mine into an even bigger issue.

Rio has completed its acquisition of the Rincon lithium project in Argentina for $US825 million, joining the likes of Posco, the big Korean steel making customer of Rio (and Gina Rinehart) and smaller Australian companies in the ‘brine boom’ including Galan Lithium, Lithium Energy, Bass Metals and Lake Resources. Albemarle, which is a significant investor in Australian lithium at the old Greenbushes mine in WA’s southwest and especially with Mineral Resources, is another major in the Argentinian brine sector.

Allkem, the name of the company created by the merger of Orocobre and Galaxy is a big investor in the lithium industry in Australia, Argentina, japan and Canada.

Rio’s announcement followed it reaching a binding agreement to purchase the project from Rincon Mining, a company owned by funds managed by the private equity group Sentient Equity Partners, in December 2021.

Rio said in the statement that Rincon is a large undeveloped lithium brine project located in the heart of the lithium triangle in the Salta Province of Argentina.

“The project is a long life, scalable resource capable of producing battery grade lithium carbonate. It has the potential to have one of the lowest carbon footprints in the industry,” Rio claimed in the statement.

Rio Tinto Chief Executive Jakob Stausholm said “Rincon strengthens our battery materials business and positions Rio Tinto to meet the double-digit growth in demand for lithium over the next decade, at a time when supply is constrained. We will be working with local communities, the Province of Salta and the Government of Argentina as we develop this project to the highest ESG standards.”

“The direct lithium extraction technology proposed for the project has the potential to significantly increase lithium recoveries as compared to solar evaporation ponds. A pilot plant is currently running at the site and further work will focus on continuing to optimise the process and recoveries.

“The market fundamentals for battery grade lithium carbonate are strong, with lithium demand forecast to grow 25-35% per annum over the next decade with a significant supply demand deficit expected from the second half of this decade.”

Interestingly Rio’s statement didn’t mention the stalled lithium project in Serbia. This Argentinian project is looking increasingly like an insurance policy for Rio if the Serbian mine plan is nixed.

Rio’s moves underline the intensity of the chase for renewable raw materials that is not going to fade, regardless of what is happening to fossil fuels as Russia continues its aggression in Ukraine.

Higher oil and coal prices might be making dinosaur companies look better as investment prospects, but they are also underlining the attractions of Electric Vehicles (EVs), solar, wind, hydrogen and other sources of renewable energy.

Batteries are the hot spot, as the escalating demand for lithium (and its price) are showing.

UK battery start-up Britishvolt has signed a memorandum of understanding with Indonesia’s Bakrie to supply nickel sulphate for battery production (The sort of mineral product that BHP is producing at Kwinana near Perth from its Nickel West ores.

Automakers are leading the charge – while Tesla gets many of the headlines, established carmakers with immense manufacturing skill are charging ahead with multibillion-dollar budgets.

Car companies and their suppliers have learnt from the semiconductor shortage of the past two years and the EV race hots up, the race for battery supplies is pushing prices for raw materials ever higher.

Spot prices for lithium carbonate have more than doubled this year to a record of more than $US70,000 per tonne. For now, manufacturers can easily pass that on to customers. But analysts warn that a battery supply crunch looms.

EVs accounted for about 60% of lithium needs last year, a level Citi forecasts will rise to 80% by 2025.

There’s plenty of talk of the surge in lithium prices seeing substitution of cheaper materials, and it is also pushing companies to take recycling and closed loop manufacturing more seriously.

Rio has said it sees demand for lithium rising by 25% a year for the next decade.

Lithium sources are abundant – Australia, Chile, Argentina and China are major sources, but it occurs elsewhere, as Rio’s planned mine in Serbia confirms.

Higher prices for customers are already materialising. Tata Motors’ battery costs have risen 20% this year as a result of higher materials prices.

Some analysts reckon the cost of EVs is up 5% or more so far this year – before higher energy inputs for owners.

Tesla raised retail prices for its cars between 5% and 10% earlier this month in two separate rises.

Tesla’s decision to switch to lithium iron phosphate batteries, which avoid cobalt is seeing rivals moving the same way. Cobalt is hard to source outside Russia and central Africa which has an appalling human rights record.

More cobalt will come on stream from Australia in the next decade, but by then the EV makers may have moved on.

For lithium itself, expect no let-up in rising prices until a real substitute emerges and while there are a few candidates mentioned, no one yet has found a definite candidate.