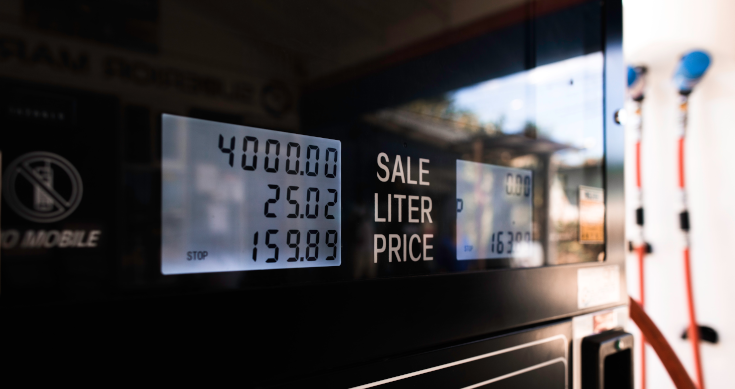 World oil prices have spiked to their highest levels since 2008, rising more than 30% since the war in Ukraine started. Apart from boosting inflation this has increased the risk of recession and contributed to another leg down in share markets. 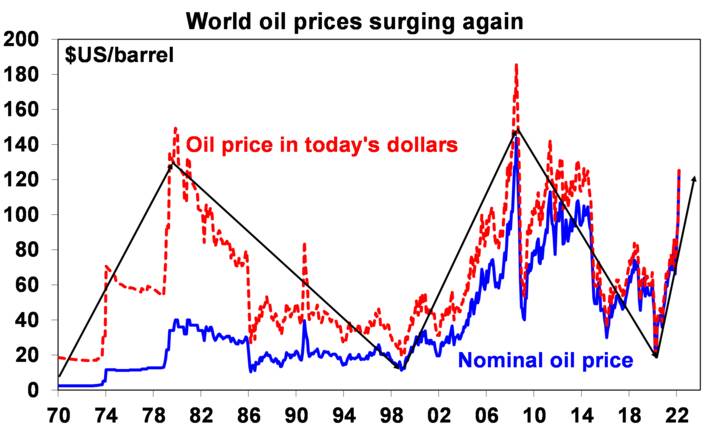 Why the spike in oil prices?

The spike in oil prices this was week was driven by reports the US and Europe were moving to ban or reduce Russian energy imports. This has since been confirmed with the US banning the import of Russian energy products, the UK banning Russian oil imports and the European Union announcing a plan to reduce Russian gas imports by two thirds this year. It comes when energy shippers and companies are self-sanctioning Russia anyway and Russia could itself cut off supplies. This is significant as Russia accounts for 11% of global oil and 17% of global gas production. It’s all come at a time when the global oil market is tight after years of underinvestment and there has been a strong recovery in energy demand post Covid restrictions. It’s an amazing turnaround as less than two years ago near the start of the pandemic oil prices went briefly negative (although it doesn’t show up in the previous chart which uses monthly data).

Past oil price surges have played a role in US & global downturns – in the mid-1970s, the early 1980s, the early 1990s, early 2000s and even prior to the GFC. See the next chart. They weren’t necessarily the driver of these recessions as other factors (like tight monetary policy after multiple interest rate hikes, the tech wreck of 2000 and the housing downturn prior to the GFC) often played a much bigger role. But they made things worse because a rise in energy prices is a tax on consumer spending which leads to lower spending power. 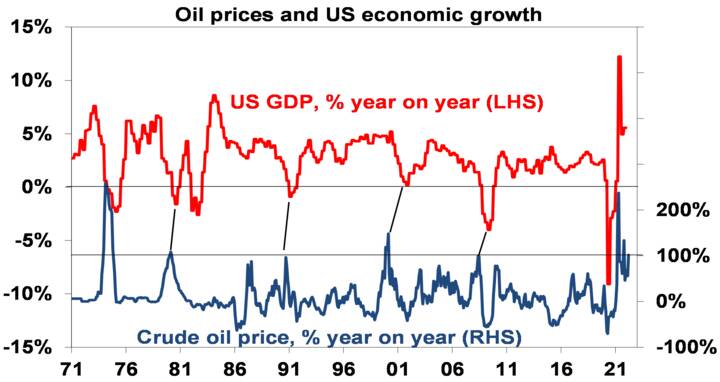 Note: the relationship between the oil price and GDP looks messy over the last two years as oil prices crashed at the start of the pandemic and then rebounded into early last year but were still relatively low. Source: Reuters, AMP

It’s not so much the oil price level that counts as its rate of change, as businesses and consumers get used to higher prices over time. Trouble often ensues if the oil price doubles over 12 months, which is what we have seen over the last 12 months (abstracting from pandemic related gyrations in 2020).

The risk of recession has clearly gone up, but there are some offsetting factors this time, suggesting that the rise in oil prices (at least so far) may not drive a recession:

Europe is the most vulnerable given how much oil and gas it gets from Russia and we have downgraded our expectations for European growth (see this week’s Econosights). By contrast the US is a bit less vulnerable.

As can be seen in the next chart, Australian petrol prices track the Asian Tapis oil price in Australian dollars pretty closely. This is because our prices are largely set globally (absent the GST, fuel excise, distribution costs and retailer margins). Our rough estimate is that the current oil price will push up average petrol prices by another 15-20 cents a litre. 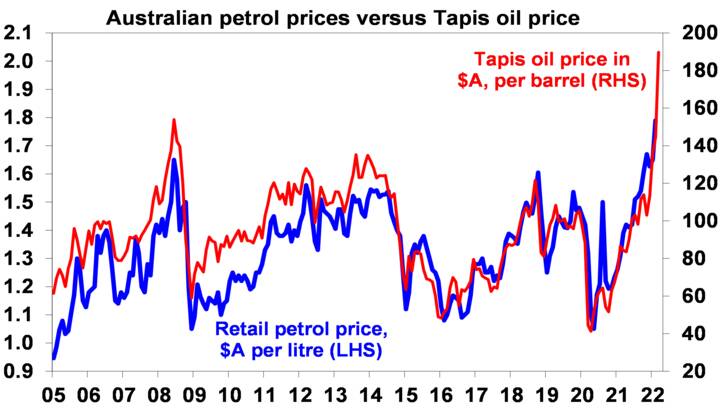 This will add around $15 a week to the average Australian household’s petrol bill since December. And, if sustained, that’s a big $750 a year hit to real household spending power, to which must also be added all the indirect ways higher oil prices boost prices (for travel and transport, plastic goods, etc.) 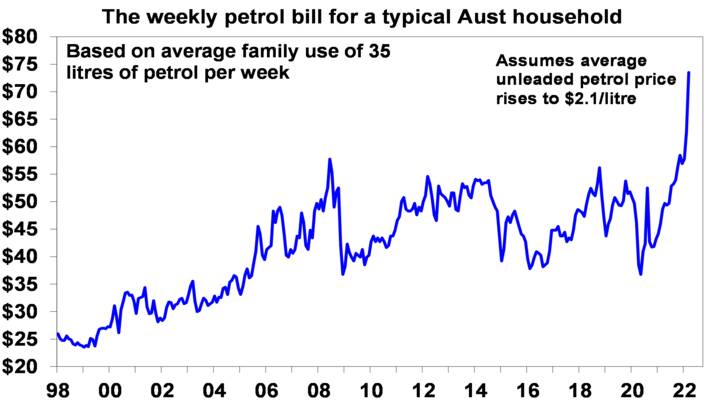 This extra $15 a week will act as a significant tax on consumer spending which will be a drag on growth in Australia. However, as in the US but perhaps more so there are some offsets:

So, while the surge in petrol prices will be a hit to real household spending power, the offset coming from higher national income means that we continue to see Australian GDP growth this year of around 4.5% year-on-year. And with the surge in oil prices and east coast floods posing more of a threat to inflation than growth (beyond short term disruptions) we last week moved our expectation for the first RBA rate hike to June from August. On this front its notable that RBA Governor Lowe has reiterated again that a rate hike is “plausible” later this year. Ongoing signs of a shift towards falling home prices may mean that the RBA won’t have to raise rates that far though.

The threat to global growth from higher oil prices and the continuing uncertainty about the Ukraine war means shares are vulnerable to more downside. However, although the risks are still rising, we don’t see them as great enough yet to drive a recession, which should mean that we will avoid a deep bear market. It’s early days, but so far Australian shares have held up better than global markets. Since their bull market highs, Australian shares are down 8%, US and global shares are down 13% and Eurozone shares have fallen 20%. A big part of the reason is the relative strength of resources stocks. While they may be over-bought in the short-term, they are likely to benefit from a new commodity super cycle which is being driven by constrained supply after low levels of new investment, decarbonisation driving increased demand for metals, and geopolitical tensions including the war in Ukraine.

If commodity prices have embarked on a new super cycle upswing, then Australian shares might finally start to sustainably reverse the underperformance against global shares that’s been seen in relative share prices since October 2009 and outperform as they did in the commodity boom of the 2000s. (Of course, the relative underperformance since 2009 is not quite as severe if much higher dividend payments from Australian shares and franking credits are allowed for.) 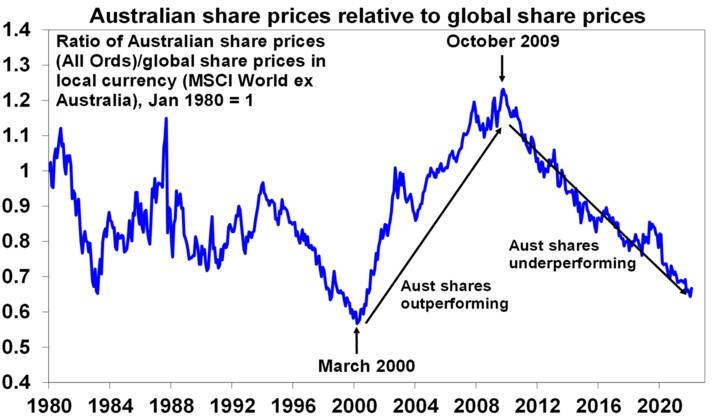