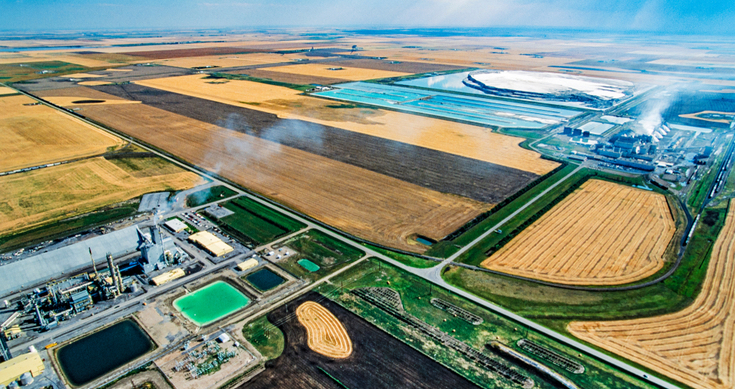 Suddenly, thanks to the Ukrainian invasion, the outlook for BHP’s latest ‘big idea’ – potash – is looking much rosier.

Russia and Belarus are the world’s second- and third-largest potash producing countries after Canada, where BHP has all but completed the first stage of its massive Jansen potash mine at a cost of close on $US3 billion.

BHP is about to ramp up the first mining stage at a cost of more than $US5.9 billion but it won’t be completed until 2027.

Many Australian, US and UK analysts have expressed doubts about the Jansen project but the invasion of Ukraine and the widespread sanctions against Russia and possibly its friends like Belarus, could turn the outlook on its head, just as it is doing for other commodities from oil and gas, to coal, wheat, nickel, gold, copper and silver.

“Potash prices have increased sharply over the last 18 months, despite latent excess production capacity. Longer term, potash stands to benefit from the intersection of a number of global megatrends: rising population, changing diets and the need for the sustainable intensification of agriculture.

“The compelling demand picture, and the maturity of the existing asset base, offers an attractive entry opportunity for a world class operation later this decade.”

That was written before the Russian invasion eventuated but in a speech on March 1 to an investment conference, the head of Nutrien, the world’s Number 1 miner, saw positives from Putin’s aggression.

The company’s interim CEO, Ken Seitz, said Russia’s invasion of Ukraine could result in prolonged disruptions to the global supply of potash and nitrogen crop nutrients.

“We could probably see a prolonged, more prolonged disruption in (potash) supply out of that part of the world,” Seitz told a BMO Capital Markets investor conference.

“We’re looking very closely at, if this is sustained, how do we deploy miners and open up ground in a very practical, pragmatic way?” he added.

He said Nutrien expects to sell up to 14.3 million tonnes of potash this year, its most ever, and has said it is considering further expansion.

Brazilian agricultural exports are especially vulnerable to a scarcity of fertiliser, with Russia a key supplier.

Global spot prices for potash hit an all-time high of around $US814 a tonne this week, after a spike in rural crop prices and a demand recovery pushed then above $US650 a tonne in late 2021 as Russia’s threats accelerated.

The previous high of around $US800 a tonne was set in the 2008 pre-GFC boom and analysts say that the longer the war goes on the tighter the sanctions, the more world prices will rise as traders look for replacement tonnes

If disruptions to gas, oil and coal supplies from Russia continue (as they appear to) Europe could struggle to find enough energy for the northern autumn and winter (let alone for summer, if it is hot).

That could force energy-intensive industries such as metals smelters and fertiliser makers to slow or shut down output.

All this is too early for BHP but the emerging long-term trend of disruptions to supplies from Europe’s two biggest exporters will improve the outlook for Jansen.

The Ukrainian invasion and the deaths of a lot of civilians will change the nature of commercial relationships with Russia, Belarus and other former CIS states.

China could take potash from Russia and Belarus but would have to finance the trade itself and organise shipping and insurance and charge Russia an arm and a leg for the privilege.