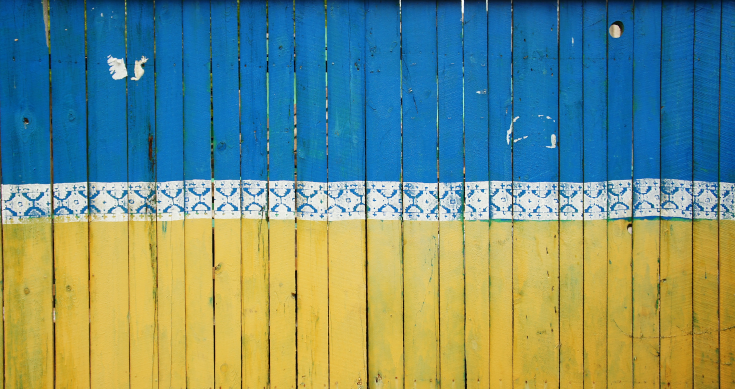 Humans do horrible things to each other, and war is the worst example of that. What was first announced by Russia earlier last week as a “peacekeeping” force moving into part of eastern Ukraine controlled by Russian separatists quickly morphed into a full-blown attack. This in turn has seen a progressive ramping up in western sanctions on Russia. All of which has contributed to high levels of financial market volatility. This note looks at the current situation, five big picture implications of relevance to investors and the performance of Australian shares.

The falls and volatility in global share markets in response to the war reflects a fear of the unknown about how far the conflict will extend and how severe the economic impact will be. The main economic threat is through higher energy prices as Russia supplies around 30% of Europe’s gas and oil imports and accounts for around 11% of world oil production. In short, investors are worried about a stagflationary shock.

If the conflict is limited to Ukraine with Russian gas still flowing to Europe and NATO not getting directly involved (Scenario 1), then the economic fallout will be limited, and further share market falls may be minor or we may have seen the low. But if Russian energy is cut off and NATO military forces get directly involved (Scenario 2) then share markets could have a lot more downside (like another 15% or so). And given the uncertainty investors may fear the latter scenario even if its ultimately avoided. There are several points to make regarding all of this.

No one knows for sure how this will unfold. But as we pointed out last week there is a long history of various crisis impacting share markets and the pattern is the same – an initial sharp fall followed by a rebound. Dark as it may seem at present the same is likely to apply this time as well, but trying to time it will be hard, so the best approach is for investors to stick to an appropriate long-term investment strategy. There are some things that will help drive a rebound once some dust settles:

On a medium-term basis though, the war in Ukraine will have some lasting implications of relevance to investors.

#1 A new “cold war” & reversal of the peace dividend

Geopolitical tensions were on the rise prior to the pandemic with the relative decline of the US & faith in liberal democracies waning from the time of the GFC. This has seen various regional powers flex their muscles – China, Russia, Iran and Saudi Arabia. The pandemic inflamed US/China tensions. And now Russia, under President Putin, is seeking to stop the eastward drift of NATO using force and to restore Russia to some of its former status, against the background of a Russia-China partnership. All of which is leading to fears (or maybe the reality) of a new cold war which the Ukraine war has given a push along. This in turn means a return to ramping up defence spending (with even Germany now planning to increase military spending to 2% of GDP) – reversing the peace dividend that saw countries reduce defence spending and allocate public spending to more productive uses in the post-Cold War era.

Implications: it may be good news for defence stocks but heightened geopolitical risks adds to investment market volatility and may require higher risk premiums (ie, lower price to earnings multiples) on growth assets. But its not all negative as the competition between nations can boost technological innovation as it did in the post WW2 Cold War.

A backlash against globalisation became evident last decade in the rise of Trump, Brexit & populist leaders. Coronavirus added to this with pressure to onshore supply chains. A reversal in globalisation has been evident in recent years in a peak in global exports and imports as a share of global GDP. Short of a quick negotiated solution or Putin being replaced there is a high-risk Russia will be excluded from much trade with the West for years, driving a further reversal of globalisation. Higher war risks also add to pressure for onshoring.

Implications: reduced globalisation risks leading to reduced growth potential for the emerging world generally, reduced global competition and reduced productivity if supply chains are managed on other than economic grounds. It threatens to add to inflationary pressure in the global economy. It will also reduce the breadth of global share and bond indices with Russia likely to be removed from global equity and bond indices – albeit its only 0.3% of the global share index.

The Ukraine conflict, thanks to the disruption and threats to the supply of energy, industrial and agricultural commodities and increased demand for metal intensive defence goods is providing a further boost to commodity prices and adds to the case that we have entered a new commodity super cycle. This is also underpinned by low levels of resource investment in recent years and decarbonisation. 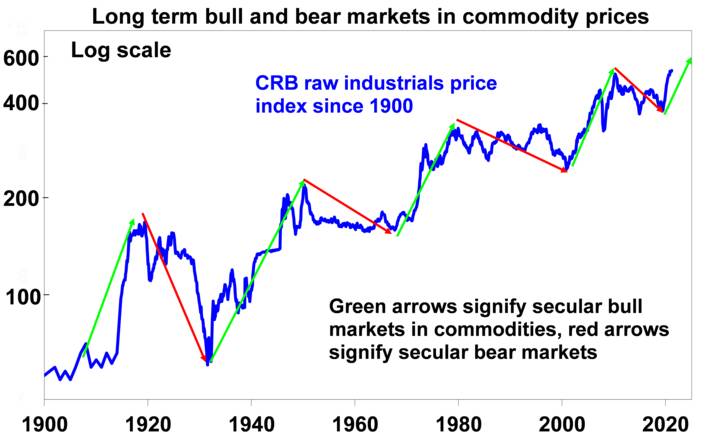 The boost to commodity prices – notably for energy and food – from the Ukraine war and longer-term from increased defence spending and a reversal in globalisation will further add to global inflation pressures. While the boost to energy and food prices may be temporary, the danger is that coming on the top of already high inflation rates it will add to inflation expectations and become more entrenched.

The near-term uncertainty caused by the Ukraine crisis may take the edge of central bank monetary tightening in the short-term. But ultimately the hit to economic activity globally and in Australia is likely to be limited and the upwards pressure it adds to commodity prices and the risk of higher inflation for longer will reinforce the case for monetary tightening, and see higher interest rates and bond yields over the medium-term.

Implications: higher inflation, interest rates and bond yields will constrain longer-term returns from shares and property compared to what we have seen over the last 30 years.

Why are Australian shares holding up a bit better?

From their bull market highs global shares are down 8%, but Australian shares are only down 6% and have so far held above their January low. Australia will suffer from any hit to global growth from the crisis and Australian consumers will be hit with record petrol prices which could easily spike another 15-20 cents a litre in the next few weeks reflecting the rise in global oil prices to around $US115 a barrel. Against this though, Australia is relatively well protected: our trade links with Russia are trivial – with exports to Russia accounting for less than 0.1% of GDP; many of our energy and agricultural products can help fill the global gap left by disruption of Russian and Ukraine exports; and national income will receive a boost from higher energy and commodity prices. And finally, the just ended profit reporting season was positive and (based on calculations by The Coppo Report) will see $36bn in dividends paid to investors over the next two months, which is nearly 40% up on a year ago & only just down on the record payments six months ago. All of which should help the relative performance of Australian shares.