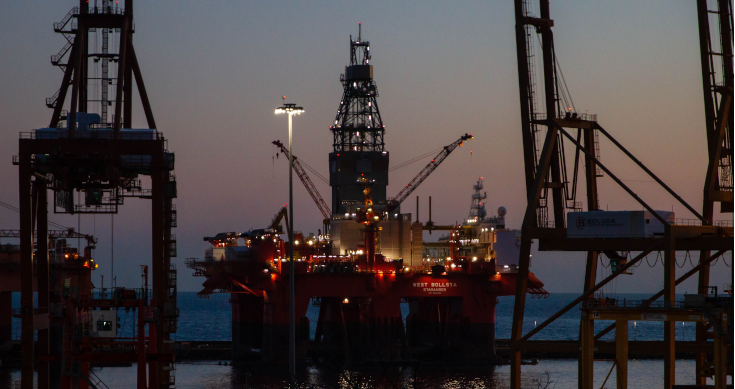 High oil prices are still the cure for high oil prices. In October 2021, West Texas Intermediate (WTI) crude oil advanced to more than USD 80 per barrel—a level last seen in 2014—reflecting the mismatch between a sharp, year-over-year recovery in global energy demand as economies reopen and the time needed for the industry to ramp up output to pre-pandemic levels. The upsurge in oil prices has fueled a strong rally in energy stocks and contributed meaningfully to the inflationary pressures affecting both consumer prices and producer costs. While we see the potential risk of further oil price upside in the next quarter or two, our conviction in the secular bear market for commodities remains intact.

We’ve seen this story before. The prices of crude oil and other commodities tend to overshoot on the downside to disincentivize production when there is a negative demand shock and then rebound, temporarily, to artificially high levels as demand recovers to stimulate a supply response and rebalance the market. Even amid a global economic recovery, higher oil prices are unlikely to prove sustainable and, in our view, should start to recede toward midcycle levels at some point next year.

Given elevated equity valuations and commodity prices, we are remaining disciplined in our exposure to oil and gas producers and mining companies. On the other hand, we are finding what we regard as compelling opportunities in specialty chemicals and paper packaging.

We do not believe that fundamentals support a prolonged bull market in oil, but we see the potential for crude prices to remain elevated in the near term.

Although WTI has climbed to levels that we believe should be sufficient to engender the supply response needed to balance the market, it still takes time for energy producers to ramp up activity and output because of the coronavirus pandemic and the challenges of mobilizing people and equipment after suffering through two oil price collapses in the past five years.

At the same time, surging prices in international gas markets threaten to increase demand for crude oil as an alternative feedstock in electricity generation and industrial applications. Among other factors, we believe that this unusual strength reflects supply outages and increased competition from Asia and Latin America for liquefied natural gas (LNG) cargos. The international market could tighten further if cold temperatures in the Northern Hemisphere spur heating demand, a scenario that would likely propel natural gas prices even higher and increase the call on crude oil as a substitute thermal fuel.

We do not view the upsurge in Asian and European natural gas prices as a product of a structural change in this commodity market. As heating demand recedes in the spring and some of the temporary factors that have tightened the natural gas market start to alleviate, we would expect inventory levels to rebuild and prices to normalize, reducing crude oil’s appeal as a replacement fuel.

Rebalancing After an Unprecedented Shock

The magnitude of the oil demand shock stemming from the coronavirus pandemic was unprecedented and briefly plunged WTI prices to negative levels in April 2020—a clear signal that energy companies needed to curtail their output. This year, the recovery in oil production has lagged the sharp recovery in crude oil demand as economic activity has resumed, sending WTI prices to levels that should prompt the energy patch to accelerate drilling.
Some market participants have questioned whether the supply response will be enough. A narrative has emerged that U.S. shale players’ capital discipline and potential disinvestment in oil and gas development because of environmental, social, and governance (ESG) concerns have contributed to and could sustain higher oil prices.

But evidence suggests that we are seeing the familiar pattern of oil prices and industry activity levels overshooting to the downside and then to the upside in response to an extreme market dislocation. Debt issuance and credit spreads indicate that high yield energy companies continue to enjoy access to the capital markets, despite the market’s increased sensitivity to ESG factors (Figure 1). More importantly, the U.S. oil-directed rig count has increased at a similar pace off the bottom as in 2016 and 2017 (Figure 2), when drilling activity began to rebound from a downcycle driven by surging hydrocarbon output from shale and OPEC’s decision not to cut supply.

Admittedly, the recent recovery in the U.S. oil-directed rig count has occurred from a lower base. However, we believe that the market does not fully appreciate the massive strides that the industry has made in producing more oil and gas with fewer rigs over the past three years. In our view, the U.S. oil-directed rig count has already recovered to levels that, eventually, should generate at least the incremental output needed to fill the gap created by typical demand growth and the base decline rate in production from existing wells.

Looking beyond the rebalancing process that should take place as the industry steps up drilling and well completion in response to higher prices, we see the potential for ongoing productivity gains to continue to pressure the cost curve for oil and, accordingly, higher-cost operators’ profit margins on invested capital.

Going forward, the pace of efficiency gains in U.S. shale may slow from the rapid rates experienced over the past seven to 10 years. However, there is likely still significant room for progress. Rig productivity in the Permian Basin, an area in West Texas and New Mexico that we believe contains some of the best reservoir rock in the U.S. onshore market, eventually should catch up with operations in the Bakken region, an area predominantly in North Dakota that is further along in its development cycle (Figure 3). We also continue to monitor leading upstream operators’ efforts to improve overall resource recovery rates from shale formations—currently estimated at 7% to 8% of oil in place—through various innovations that would boost reservoir pressures.

A Preview of Potential Rig Productivity Gains to Come?

*The Bakken is an oil-producing region predominantly in North Dakota that is further along in its development life cycle than the Permian Basin, an area in West Texas and New Mexico. Note that extreme oil supply and demand shocks, such as the ones experienced in 2016 and 2020, can distort drilling efficiency metrics because of the consequent drawdown in the active rig count and, then, during the initial stages of the recovery phase, the completion of backlogs of drilled but uncompleted wells, leading to increased production at a lower rig count. We believe that oil and gas producers should retain some of the incremental efficiency gains that occurred during the downturn, as in 2016.

And the potential productivity gains aren’t restricted to U.S. shale. The costs associated with offshore and deep-water oil and gas production also have come down significantly. Factors at play include an increasing emphasis on opportunities that tie in to existing infrastructure, a focus on new developments that target high-quality reserves without taking on too much engineering complexity, and material deflation in service and equipment costs.

The combination of what we regard as elevated valuations and commodity prices in the context of a longer-term bear market creates, in our view, an unfavorable risk/reward setup for many of the higher-beta segments in the natural resource universe. Accordingly, we remain selective in our energy and mining investments. In keeping with our mandate, we aim to maintain a philosophically appropriate level of risk-adjusted exposure to these commodity-sensitive industries through valuation discipline and a focus on what we regard as the highest-quality names.

Specialty chemicals is one area that we like, as we believe that the industry should benefit over the long term from lower commodity prices. The setup in companies that focus on paints and other coating products strikes us as potentially attractive. Historically, the best of these firms have been able to protect margins by passing along rising input costs to customers and then retained a portion of these pricing gains when oil prices eventually recede.

We also prefer investments in industries in which a rising incentive cost curve can pull commodity prices higher, potentially improving producers’ profit margins. For example, over the next three to five years, we expect demand growth related to online shopping and the increasing substitution of paper for plastic packaging to be a tailwind for containerboard producers. In contrast to the energy sector, we see the potential for the cost of adding incremental capacity to rise in the coming years, in part, because the number of existing paper plants that could be converted inexpensively to producing cardboard has dwindled. This scenario of increasing demand and, critically, rising cost curves on the supply side should support higher containerboard prices—and, in our view, potentially higher profit margins for the industry’s leading players.