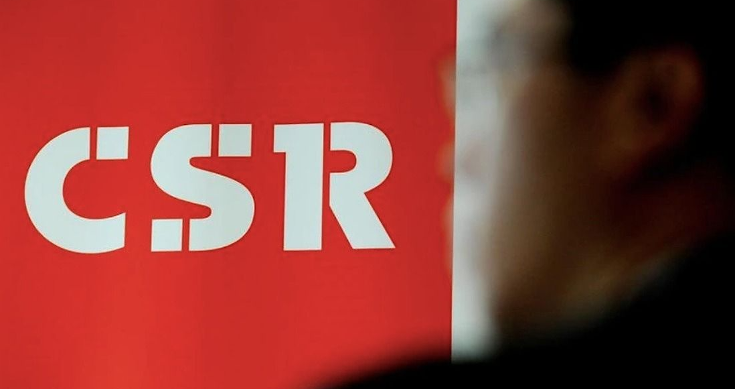 A solid 30% rise in net earnings for the half year to September for building products group CSR saw the company’s shares hit levels not seen for 10 years or more on Thursday.

And the company sees more of the same in the current six months with management releasing an upbeat outlook (unlike Domino’s).

Trading revenue rose 6% to $1.1 billion and earnings before interest and tax (EBIT before significant items) totalled $132.6 million, up 41%.

The higher EBIT came from building products with a 25% jump in EBIT of $120.6 million, “reflecting positive conditions in the detached market, strong operational execution, manufacturing performance and good cost control in a COVID constrained environment.”

The company’s property reported EBIT of $6.6 million after the Moss Vale site sale in NSW. “The final transaction at Horsley Park was secured in July 2021. In total, this project is expected to generate proceeds of $408 million by the year ending 31 March 2025,” CSR predicted.

The company’s aluminium trebled its EBIT to $18.3 million, up from $6.2 million in the prior comparable period with performance reflecting improved spot pricing and hedged position. Global aluminium prices hit 9- and 10-year highs in the half year.

The company said it was able to overcome COVID-19 challenges and benefit from the construction boom, which was particularly seen in detached homes.

CEO Julie Coates said in Thursday’s statement that the company’s businesses had performed very well and would continue doing so into the current second half.

Looking to the rest of 2021-22 and into 2022-23, CSR the first half saw “building activity during the period grew in line with expectations going into the year. Declines in high density and commercial construction partly offset the strong detached market.”

“We expect activity in the second half which has fewer trading days than the first half to reflect the traditional seasonality of the building industry. Completion times for projects continue to lengthen, reflecting supply chain congestion, cost pressures and labour constraints which are impacting the broader industry.

“The diversified nature of Building Products across product, geography and end markets positions the business well for the second half and beyond. This is supported by continued focus on maximising market opportunity, executing strategy and maintaining cost and operational discipline while returning to more normalised levels of investment.”

The company sees a solid second half contribution for property with an EBIT of around $45 million forecast, indicating a near $28 million result this half from sales from several development sites in Queensland, NSW and Victoria.

The often moaned about aluminium business us improving with the half year EBIT of just over $18 million likely to more than double to a range of $35 million to $41 million “assuming all other revenue and cost areas (including coal costs) are unchanged.

“As aluminium prices have improved, CSR has significantly increased its hedge position for the next four years to provide more certainty of future earnings,” CSR directors said in Thursday’s statement.