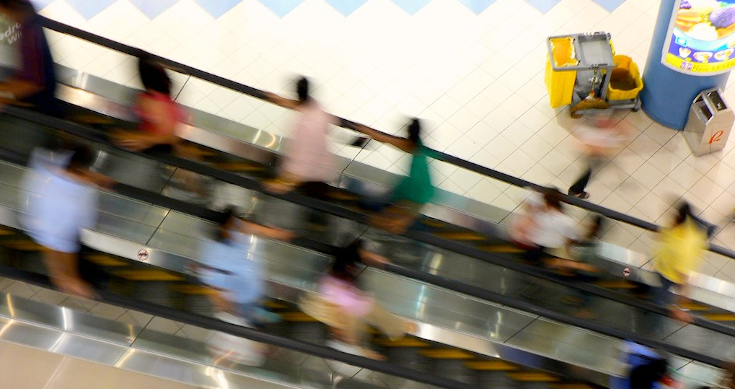 Not easy to make a dollar in the retail space over the past couple of years. Here’s how three of the majors are faring: Coles Group, JB Hi-Fi, and Australian Pharmaceutical Industries.

Number two supermarkets chain Coles Group has joined its larger rival Woolworths in confirming the damage done to sales in the September quarter by the Covid Delta lockdowns.

Coles said first-quarter comparable sales rose 1.4% to $8.6 billion, and while it was in line with analyst expectations, the company’s commentary made it clear it was a battle to get there with higher costs a major concern.

Online sales saved the performance (just as they did at Woolies) jumping by almost 50% for the same period.

Coles’ sales growth was down on the June quarter (which was understandable with the lockdowns starting in the closing weeks of June).

Woolies reported comparable first sales growth of 2.7% on Wednesday with CEO Brad Banducci describing the quarter as “challenging,” which seems something of an understatement given the difficulties people in NSW, Victoria and the ACT have faced since June and July.

Coles says it has a higher number of its stores in inner-city and shopping centre locations, meaning its sales were more affected by lockdowns and retail trading restrictions.

CEO, Steve Cain says these stores are now showing good signs of recovery in NSW after its reopening earlier this month, with Victoria expected to follow suit from this week.

“We are expecting local shopping to unwind as it did last year. We are expecting to be a beneficiary of it,” he said. Sales through October have so far stayed in line with the first quarter, Mr Cain said.

“As a result of the lockdowns, there was a return to local shopping at the expense of shopping centres, as well as increased demand for eCommerce, resulting in strong sales growth of 48% with two-year growth of 132% (relative to 79% in the fourth quarter of FY21), Coles said on Thursday.

eCommerce sales were $764 million for the quarter, up from $518 million, but well behind Woolies $1.87 billion (It does have the Big W chain).

Liquor sales increased by 2.6% with two-year headline sales growth of 20.4% (relative to 12.5% in the June quarter of 2020-21) as a result of elevated sales from COVID-19 and the closure of on-premise venues in NSW, the ACT and Victoria for most of the quarter.

Coles also saw a slowing in its Express convenience store business with “reduced levels of traffic on the road as a result of COVID-19 lockdown restrictions led to a decrease in convenience sales revenue of 10.1% (relative to an increase of 2.2% in the fourth quarter of FY21) with two-year headline sales declining by 0.8%,” the retailer said on Thursday.

Mr Cain also warned of inflationary pressures affecting the meat category, though noted the supermarket was still seeing lower prices overall, with deflation at 0.3 per cent for the quarter.

“We are receiving price increases from suppliers, and obviously, they’re negotiated on a case-by-case basis. But our numbers are not like the [consumer price index] that we saw reported yesterday of 3 per cent,” he said.

He complained of a shortage of pallets (used to move groceries and other packaged goods) and indicated this would be a concern well into 2022.

Coles said incurred Covid costs of approximately $75 million (inclusive of team member discounts) in the first quarter “with costs accelerating in August and September, largely due to the approximately 20,000 team.” Woolies put its first quarter costs at $110 million.

Coles said to meet a jump in demand its Online business more than doubled capacity in NSW through the addition of 17 home delivery stores, while eight stores were added in Victoria and capacity was extended in existing Click & Collect locations across both states. Coverage was also expanded during the quarter, including in regional areas.

Electronics and consumer goods chain JB Hi-Fi has seen a recovery emerge in sales since the lockdowns were eased in NSW earlier this month and sees that continuing with Victoria starting this week.

But the December half outlook still doesn’t look great because of the sharp fall in store sales the September period.

The retailer says its Australian store sales plunged 7.9% in the September quarter as it waited out the extended lockdowns in Sydney, Melbourne and the ACT, though its conditions have improved this month.

New CEO Terry Smart (He’s actually a former CEO, reappointed) told Thursday’s AGM that the situation was slightly better in New Zealand, where sales dropped 6.4% and at whitegoods retailer The Good Guys, which experienced a 6.1% sales decline for the quarter.

The slide was not unexpected – the major markets of Sydney and Melbourne were locked down in the September quarter of this year but a year ago, the country had all but re-opened after the first lockdowns and JB saw a massive 27% surge in sales for the same quarter.

Over a two-year period, which compares the latest result to fiscal 2020 before the start of the pandemic, JB’s Australian sales were up 17.3% and The Good Guys’ rose 22.9%.

Mr Smart said the two-year growth rate showed the business was still seeing heightened customer demand, and that sales have started to improve this month.

“In October, we have seen sales momentum continue and have benefitted from the re-opening of stores in NSW and changes to the timing of key product releases versus prior years,” he said.

“While the start to this year has been significantly impacted by COVID-19 restrictions and in some states extended periods of store closures, we have demonstrated our ability to adapt and respond to continue to meet the strong demand from our customers.”

Mr Smart said the company was confident heading into the crucial Christmas trading period thanks to its “quality store locations and our established online offerings”.

Investors liked the news from the update and sent the shares up more than 3% to $48.43.

That might have looked low bit it was $8.2 million better than the 2019-20 outcome when the first wave of lockdowns hit hard.

Despite the apparent weakness shareholders will get a fully-franked dividend of 2c a share, unchanged from a year ago. That took the total to 3.5 cents with the 1.5 cents a share interim.

That looks a bit like the company doling out the goodies to shareholders ahead of any bid that would restrict payments.

The pharmacy wholesaler revealed yesterday reported revenues for 2020-21 of $4 billion, down 0.4% on 2019-20 when Covid was also a factor in the closing half of the year.

The company said the weakness was partially offset by high revenues from prescription medicines  which saw a 3.6% rise in revenues for pharmacy sales.

Rales made in stores fell 14.4% for the year as API closed company-owned stores in major CBD hotspots throughout the year resulting in a net loss of 10 Priceline sites across the country.

The business is currently being chased by Wesfarmers and fellow pharmacy wholesaler Sigma, but API has told shareholders it has not received and agreed to a final offer from either party.

“Due diligence has concluded and negotiations are continuing,” API said.

“These results reflect the ongoing impact of pandemic-related lockdown restrictions and lower CBD foot traffic on API’s retail businesses in Australia and New Zealand compared to FY20, which was significantly less impacted by COVID.

“However, the fact that we were able to exceed the profit guidance provided on 12 July, with underlying EBIT $7.0 million higher than anticipated at that time, reflects the impacts of a number of operational initiatives undertaken during the half and the strength of our business model.

“Both our retail businesses, Priceline Pharmacy and Clear Skincare are primed and ready for growth, which we are witnessing since restrictions began to ease. During the financial year, despite lockdowns, we added another 19 Clear Skincare clinics, taking the network to 86.