The Beetaloo Basin is shaping up to be Australia’s next big hydrocarbon province.  An unconventional shale gas play of approximately 28,500km2, the Basin has attracted the attention and dollars of some of the world’s biggest names in shale gas exploration – attracted to its similarities to the highly productive Marcellus Basin in the north east of the USA. The Basin’s potential has also been recognised by the Federal Government which is offering considerable incentives to exploration permitholders in order to accelerate development.

The Beetaloo Sub-basin has the potential to be a world-class gas province. Estimates of the gas resource in the region vary but the results from preliminary exploration are encouraging. The NT Government estimates that there are over 200,000 PJ of gas in place in the sub-basin (NT Geological Survey Record 2017-003). Not all of this gas will be recoverable. However, even at a very conservative recovery rate of 10 per cent this is more than ten years’ worth of domestic gas demand. This resource would be capable of servicing a range of markets for decades into the future.

Sitting within the much larger McArthur Basin and located in the Northern Territory, Beetaloo is a sedimentary basin that has numerous geological features that give it enormous potential for commercial gas production.  Exploration is now focussing on two formations in the basin – the Velkerri and the Kyalla.  In particular, early testing on the Velkerri is prompting some in the industry to proclaim it as one of the hottest shale gas plays in the world.

Figure 1: Location of Beetaloo Basin and infrastructure – including gas pipelines 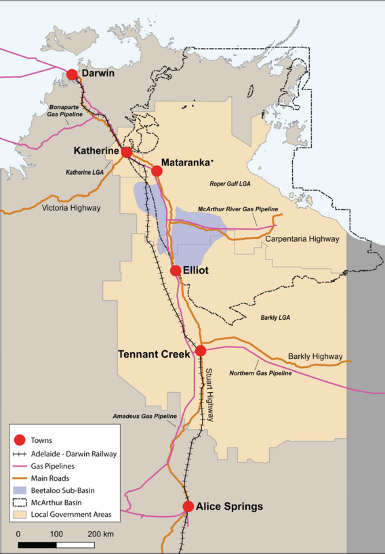 There are many factors that contribute to the Beetaloo’s high prospectivity and way too numerous to mention here but have been described independently and in detail by the Northern Territory’s Geological Survey (NTGS). Broadly speaking the Velkerri & Kyalla formations are organically rich source rocks and compare favourably to the highly productive shale gas basins in the USA.  The formations demonstrate excellent reservoir properties and mineralogy that is conducive to successful stimulation (Fracking). The Beetaloo Basin is large and continuous as are Velkerri & Kyalla formations that lie within it.  Those formations are also particularly thick (73m on average for the middle Velkerri alone) and continuous layers of rock that occur across a large regional area.  That means it’s going to have a higher degree of predictability when it comes to understanding the resource, knowing where to drill and frack and understanding how it will produce over time.

Those characteristics have enabled geologists to estimate the potential size of the Beetaloo resource with a reasonable level of comfort and in 2017 the NTGS estimated total Gas in Place (GIP) at between 118-293 Tcf for the Middle Velkerri alone. Geoscience Australia have estimated the Basin to contain between 50-100Tcf GIP.  Table 1 shows a Gas in Place comparison between the large unconventional gas basins in the US  and the middle Velkerri formation within the Beetaloo basin.

Table 1:  US Shale Gas Basins versus the middle Velkerri (Beetaloo Basin). Comparison of Gas in Place (GIP) and Basin Area

With such significant prospectivity it will come as no surprise that around 30 wells have been drilled into the Beetaloo since the early 1980’s with estimated expenditure to have been around A$360million so far, but serious development of the basin is only now possible due to a number of factors.

The Federal Government is very keen to see the development of the Beetaloo move forward and in January of this year released a strategic plan to unlock the value in the Beetaloo Basin and has committed more than $220million to support development. $50million has been specifically allocated as grants for exploration drilling that occurs before the 30th June 2022 – this has seen exploration drilling activity accelerate already. The expected impact of the Governments Strategic Plan for the Beetaloo is demonstrated in Figure 2.

Figure 2: Expected impact of the Beetaloo Strategic Basin Plan on the timing of Beetaloo gas development. 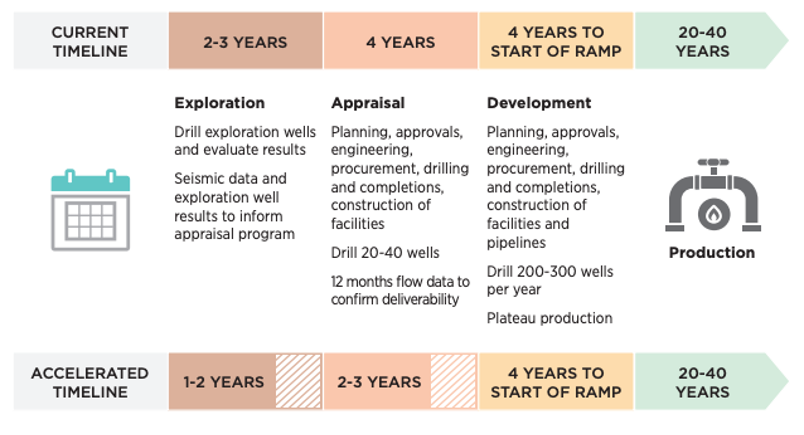 2022 and 2023 are going to be very busy years in the Beetaloo as companies such as Santos, Origin, Tamboran Resources and Empire Energy conduct their exploration programs and work towards the Federal/NT Governments target of beginning project appraisal within the 2-3 year timeframe.  While the targets are tight it is perhaps an indication that the Beetaloo’s favorable characteristics will yield exploration results that enable the Basin to be commercialised swiftly.

A highly regarded Funds Management and Investment Banking executive, Richard has over 25 years’ experience in capital markets spanning Asia-Pacific, Europe and the US – where he has held senior roles in equities research and institutional research sales. Richard is currently an equity analyst with Corporate Connect Research. Richard started his career as an exploration geologist for Freeport McMoran before moving to finance where he has held roles with Schroder Investment Management (Sydney/London), Deutsche Bank (UK), Citigroup (Aust), Credit Suisse (Aust) and Antares Equities/MLC Asset Management.