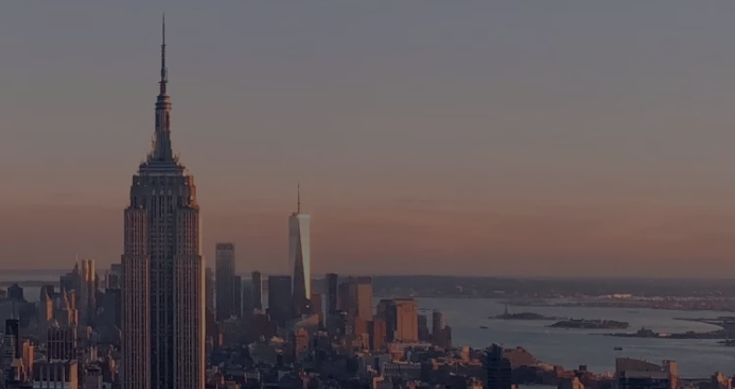 Market Drawdown May Have Run Most of Its Course

As we enter the weaker seasonal period of the calendar for equity markets, something several friends said last summer comes to mind: they were waiting for a pullback to deploy cash. This mindset can be fraught with peril, as no one can time the market. Although some may be lucky enough to catch an occasional top or bottom, few can consistently outperform with this strategy. Even with perfect foresight, a market timer may not do so well.

As we enter the final quarter of 2021, the din of market skeptics continues, fueled by a volatile September. The S&P 500 Index experienced its first 5% drawdown in almost a year, ending the seventh-longest streak in its history. A drawdown was bound to occur eventually as readers of last quarter’s Long View may recall. Specifically, we highlighted how new bull markets often experience a period of consolidation at this point in the cycle as the early gains are digested amid peaking economic momentum and earnings growth. The narrative has now broadened beyond peak economic and earnings growth, however, to include peak everything from Fed/fiscal support to investor euphoria, which has some investors questioning just how far the current selloff may progress. While it’s possible this consolidation has more downside ahead, we continue to believe there’s more to the story; many of these peak moments are not quite as worrisome as they may at first appear.

One peak that remains distant for many individual stocks is their all-time high. Although major U.S. indexes are only down mid-single digits from their records, the average stock has experienced a much larger price decline from peak, with smaller companies bearing the brunt of the selling pressure. In fact, 71.5% of S&P 500 companies have experienced a 10% drawdown from peak, while 75.4% of small cap stocks in the Russell 2000 Index have suffered a bear market decline of -20% or greater. The fact that these rolling corrections have already played out could prove a cushion for the headline indexes and lessen the chances of substantially worse declines from current levels.

Another peak that may be misperceived centers around investor euphoria, which typically coincides with a sizable correction once there is no one left to buy (and drive markets higher) because everyone is already fully invested. Despite the strongest post-recession bull market return to this point in the post-World War II era, retail investor sentiment has turned decidedly bearish in recent weeks. One metric we use to gauge this is the American Association of Individual Investors (AAII) Sentiment Survey, which has been tracked since 1987. This data nosedived to a -12% spread between bullish and bearish readings last week, a level comparable with the 2020 recessionary drop and its aftermath. However, this metric tends to be more of a contra indicator at extremes in that when it moves too deep toward bullish or bearish readings, the market tends to then move in the opposite direction. While a further decline may be needed to reach truly extreme levels, this metric has already seen a substantial decline, meaning much of the damage may have already occurred. Data as of Sept. 24, 2021. Source: American Association of Individual Investors.

Policy is also at peak, which explains much of the peaks achieved in economic momentum and earnings growth we mentioned last quarter. Both fiscal and monetary support have likely reached a pinnacle, meaning things might not be as good for financial markets going forward as they were earlier in 2021. However, the future may not be as gloomy as policy trajectory suggests. While the Federal Reserve appears to be setting the stage for tapering its QE purchases, monetary policy will remain incredibly supportive even when the program has been fully wound down. The Fed’s move to an “average inflation targeting” approach has changed its reaction function from pre-emptively fighting inflation to more passively and accommodatively allowing the economy to run hotter than usual.

To that end, the Fed would have likely already started tightening policy by this point in past cycles. For example, the underemployment rate (U-6) that includes part-time and marginally attached workers along with unemployed persons currently stands at 8.8% today, down from 22.9% in April 2020. When the Fed began tapering QE purchases last cycle at the very end of 2013, it stood at 13.1% (from a peak of 17.2% in April 2010). Going back even further, this measure stood at 11.4% in 1994 and 9.6% in 2004 when the Fed began raising interest rates. Put differently, the Fed has allowed the labor market to improve to a greater degree today as compared to past tightening cycles. Further, the Fed is still arguably the most dovish central bank on the planet, given ultra-accommodative policy toward the only economy in the world that has already recovered to its pre-COVID-19 growth trend. This isn’t your father’s Federal Reserve!

While the prospect of a less accommodative Fed may be top of mind today, the traditionally dovish central bank may become even more so following the recent departures of two more hawkish Fed governors, Eric Rosengren and Robert Kaplan, although neither was a voting FOMC member. Additionally, the terms of the three key Federal Reserve Board positions (Chair, Vice Chair, and Vice Chair for Supervision) all expire in the next five months. Even though two of these three leaders could stay on the board even if not re-nominated to their current positions (Vice Chair for Supervision Randal Quarles’s board term ends in 2032 and Jay Powell’s in 2028), the leadership of the Fed along with a meaningful portion of the FOMC membership could be newer, more dovish appointees. Although the FOMC is not truly a democracy, the odds appear to favor a continuation of the currently loose monetary stance in the coming months.

Fiscal support has also likely peaked, with the Federal pandemic unemployment programs expiring at the start of September. Over 8.5 million workers lost all benefits and many more lost $300 supplemental payments. While there are many factors contributing to the present labor market tightness, expiration of these benefits should help encourage some workers to seek jobs, a welcome development given the 10.9 million job openings across the country. This should also contribute to easing wage pressures in the coming months; for example, data from Gridwise Analytics shows that wages for ride-hailing service drivers have been on the decline over the past three weeks. This is particularly the case in states where the pandemic unemployment programs recently expired (where driver wages were down -5.3%) versus states that elected to end them earlier (-0.3%). An easing of the labor supply shortage could have positive ripple effects into the broader supply chain where bottlenecks remain a challenge for many companies. In fact, several S&P 500 companies have already pre-announced results and “kitchen-sinked” the quarter, blaming issues including labor shortages and supply chain problems for negative results. However, with U.S. and global COVID-19 cases on the decline and vaccination rates rising such that herd immunity is on the horizon in many countries, the current moment may represent the peak bottleneck for supply chain challenges as normalisation in labor, shipping and COVID-19 occurs in the coming quarters. With Delta having peaked in the U.S., the economy appears poised to re-accelerate from a late summer downdraft. While it could take another month or two for this to become apparent in hard data, survey or “soft” data such as the ISM Manufacturing PMI showed improvement more recently with the new orders component — which the ClearBridge Recession Risk Dashboard focuses on — remaining at a very healthy 66.7 versus July’s 64.9 reading. These prints, combined with continued recent strength in housing and the consumer, have helped the Citi Economic Surprise Index move higher in recent weeks from levels consistent with prior troughs.

Exhibit 5: Economic Surprises on the Rebound The Citi Economic Surprise Index is United States based. Data as of Sept. 30, 2021.

Even though the Delta wave weighed on third-quarter economic activity, the ClearBridge Recession Risk Dashboard has remained buoyant with all 12 indicators and the overall signal firmly in green or expansionary territory. We continue to believe that recessionary risks are well below normal, and the economy appears poised to accelerate into the fourth quarter and early 2022. 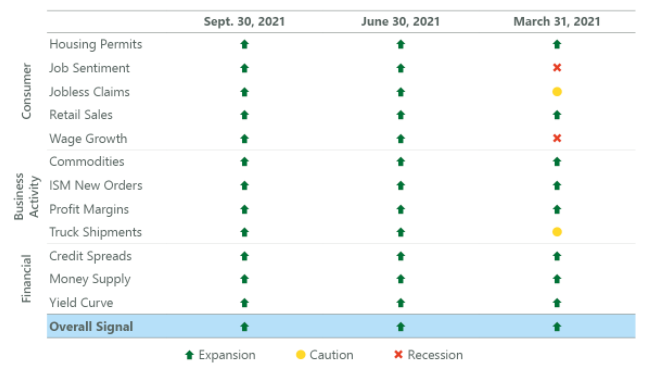 Importantly, the U.S. appears to be moving into the final stage of the reopening process from the pandemic. This stage includes a return to in-person learning, a return to offices, a pickup in business travel and a more persistent rebound in services spending. On the back of growing demand, businesses will continue to replenish depleted inventories and capex trends should remain strong. Globally, consumers have over $5 trillion in excess savings to draw upon when ready to spend or invest. The primary risk to financial markets remains the emergence of a vaccine-resistant mutation; however, much of the world appears to be learning to live with the virus. Particularly encouraging was the recent announcement of positive clinical trials for a therapeutic treatment administered orally, which could be a game changer for the treatment of COVID-19 patients.

As the global economy continues to normalise, U.S. economic growth should weather the peak in peaks and remain above-trend for the next 12 to 18 months. While it may not be a perfectly smooth path, supportive market internals, contrarian retail sentiment, a still-dovish Fed, potentially easing labor market and supply chain bottlenecks, and a re-accelerating economy buoying earnings should lead to continued upside in equity markets. Considering all of these dynamics, rather than focusing solely on the above-average valuations reached in the recent bull market, it appears that the peak in peaks may already be somewhat priced in. In fact, a quote comes to mind from the late market researcher Richard Russell: “A bull market is a bull. It constantly tries to throw off its riders.” The challenge equity investors may be facing could be simply holding on at the present moment.