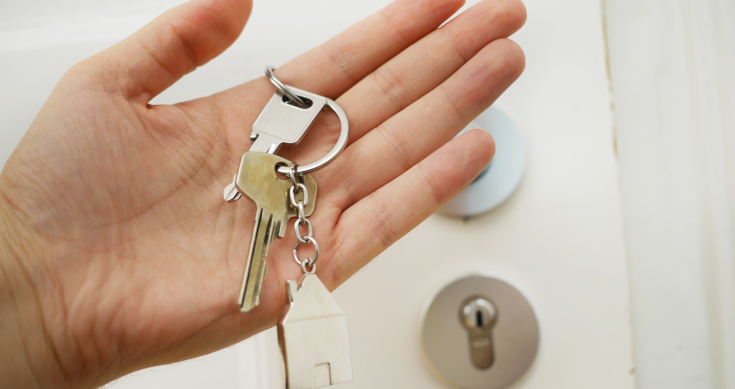 For as long as I can recall housing affordability has been an issue in Australia but since the 1990s it’s gone from being a periodic cyclical concern to a chronic problem. The 20% rise in prices over the last year has put the spotlight on the issue again. With the surge in house prices since the 1990s has come a surge in debt which brings with it the risk of financial instability should something go wrong in the ability of borrowers to service that debt. This note looks at the main issues. Where is the property market now? What’s driving poor affordability? How big is the risk of financial instability? What can be done about both issues? And what’s the outlook for home prices?

After a dip around mid-last year in response to the initial national coronavirus lockdown, average residential property prices have since risen around 20% according to CoreLogic. 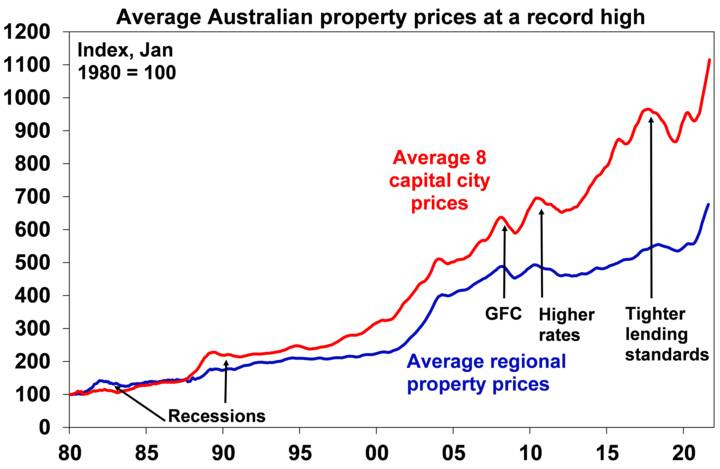 The gains have been led by houses and regional Australia, with units and Melbourne lagging. And while the monthly pace of growth has slowed from 2.8% in March, despite east coast lockdowns daily CoreLogic data indicates that its remained strong at around 1.3% in September. The gains have been driven by record low mortgage rates, buyer incentives, a tight jobs market, a desire for more home space as a result of the pandemic and working from home, numerous government home buyer incentives, the “fear of missing out” and lower than normal listings. This has pushed average prices to record highs & real house prices to around 23% above their long-term trend. 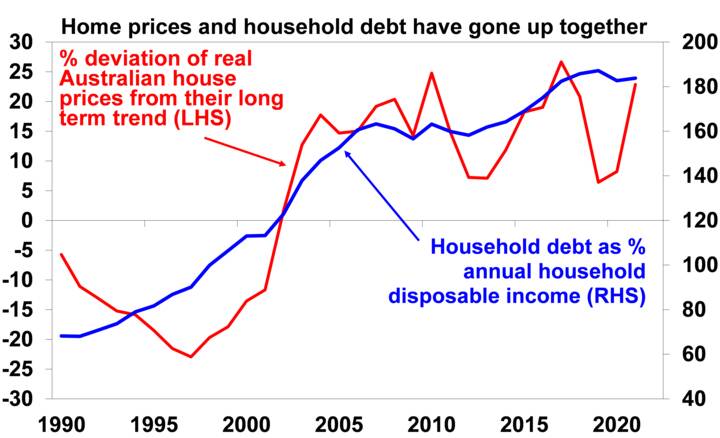 As can be seen in the last chart house prices have been well above trend for nearly the last two decades. Which brings us to the issue of chronically poor housing affordability.

What’s the risk of a financial crisis?

Predictions that high debt levels would lead to a crash in property prices threatening the financial system and the economy have been a dime a dozen over the last two decades. None have come to pass. Most borrowers are able to service their mortgages. Non-performing loans are low & the collapse in mortgage rates has seen household interest payments as a share of income fall to levels last seen in the mid-1980s. 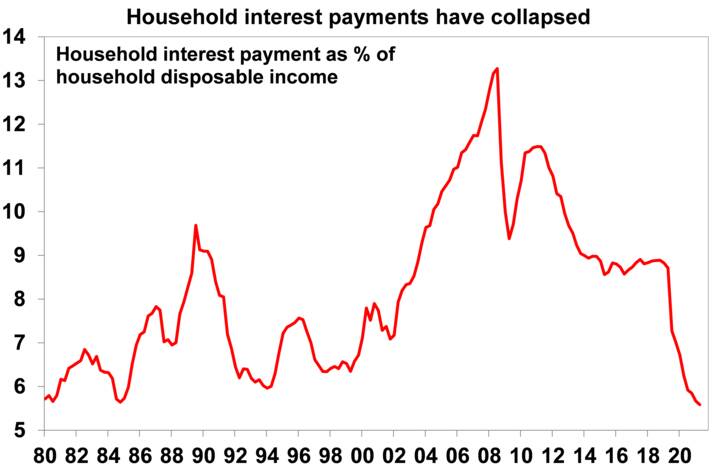 However, there is a danger in getting too complacent here. Household debt to income ratios are very high and allowing them to get ever higher runs the risk that there could be a major problem at some point so it makes sense to act pre-emptively to cool things down. But whether there is the risk of a financial crisis or not the really big problem is poor affordability.

So why is housing so expensive?

There are two main drivers of the surge in Australian home prices relative to incomes over the last two decades. First, the shift from high to low interest rates has boosted borrowing ability and hence buying power. Second, there has been an inadequate supply response to demand. Starting in the mid-2000’s annual population growth surged by around 150,000 people per annum and this was not matched by a commensurate increase in the supply of dwellings resulting in a chronic shortage (see the green line in the next chart). The supply short fall relative to population driven underlying demand is likely the major factor in explaining why Australian housing is expensive compared to many other countries that have low or even lower interest rates. And the concentration of Australians in just a handful of coastal cities has not helped either. 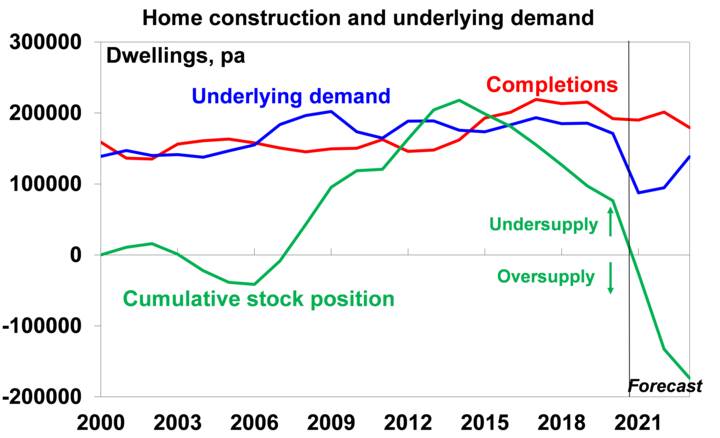 A range of other factors have played a role including negative gearing and the capital gains tax discount for investors, foreign buying and SMSF buying, but they have been relatively minor compared to the chronic undersupply. And investor and foreign demand have not been drivers of the latest surge.

So what can be done?

The good news is that we may be getting closer to the end of the 25-year bull market in property prices: interest rates are likely at or close to the bottom so the tailwind from falling interest rates is fading; strong home building in recent years and the collapse in immigration may lead to an oversupply of property; and the work from home phenomenon may take pressure of capital city prices. However, there are no guarantees. And things could just bounce back on the demand side once the pandemic recedes and immigrants return. So a long-term multifaceted solution is called for.

The first thing to do is to tighten macro prudential controls to slow record levels of housing finance. Raising interest rates is not possible given the weakness and uncertainty hanging over the rest of the economy and crashing the economy to get more affordable housing will help no one. So, a tightening in macroprudential controls to slow lending is warranted. With housing credit now growing faster than incomes and at a faster monthly pace than when APRA last started macro prudential controls in 2014 and more than 20% of new loans going to borrowers with debt-to-income ratios above 6 times up from 14% two years ago they are arguably overdue. This time around investors are playing a lessor role in the property boom so macro prudential controls should be broader than was the case in 2014-17. The main options are restrictions on how much banks can lend to borrowers with high debt to income ratios & high loan to valuation ratios and increased interest rate servicing buffers. Ideally first home buyers will need some sort of exemption. With the Treasurer supporting action and the Council of Financial Regulators (RBA, APRA & ASIC) expressing concern about household leverage they look to be on the way, although their implementation still looks several months away. And last decade’s experience showed that they work.

Of course, this is just a cyclical response and more fundamental policies are needed to address poor housing affordability. Ideally these should involve a multi-year plan involving state and federal governments. My shopping list on this front include:

Policies that are less likely to be successful include grants and concessions for first home buyers (as they just add to higher prices) and abolishing negative gearing would just inject another distortion in the tax system and could adversely affect supply (although I can see a case to cap excessive benefits).

What is the outlook for home prices?

National home price growth this year is likely to be around 20% with prices already up by around 17%. 2022 is likely to see property price growth slow to around 7% as a result of worsening affordability, reduced incentives, possibly higher fixed mortgage rates, continuing lower than normal immigration & macro prudential tightening. If the latter does not happen then we are likely to have to revise up our house price forecasts.