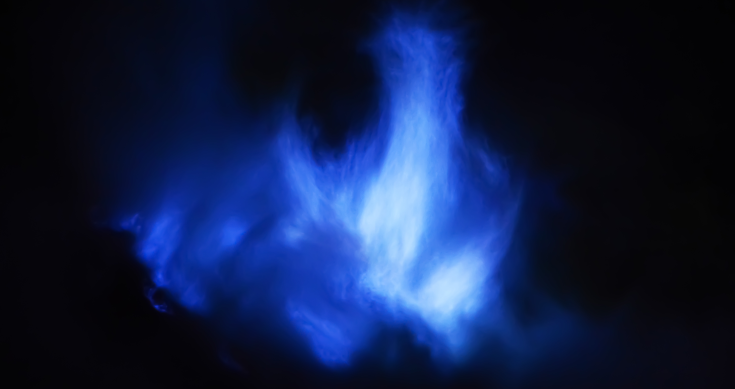 The world’s energy system is morphing into a higher renewables and efficiency phase with the back-up of transition fuels like natural gas. However, 2021’s lesson is that reduced investment spending in gas, oil and coal has also reduced the resilience of the global power generators’ supply sources.

Chart-1 – Thermal coal, LNG and Gas in Europe and US trading near multi-year highs 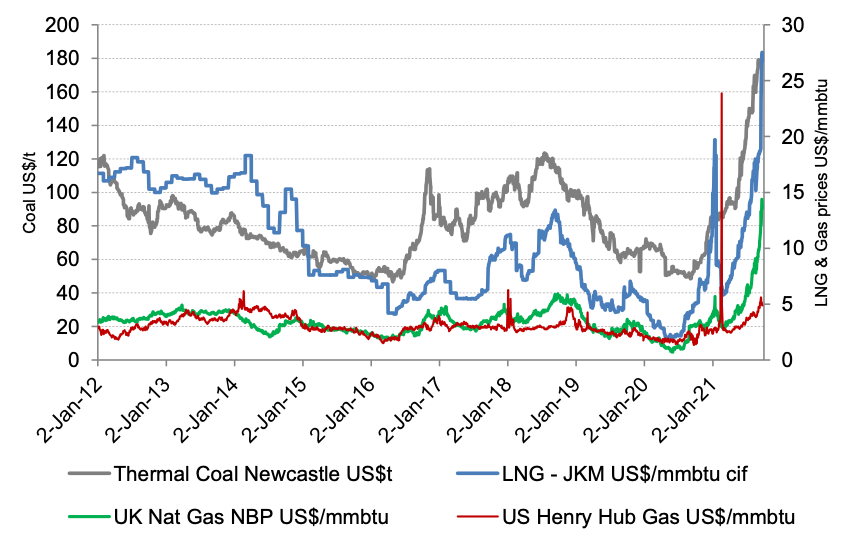 Demand and supply shocks – in Asia and Europe

Covid-19 interrupted gas and coal production and utilities reduced inventories through FY21. Also, extremes of drought and floods have interrupted Northern Hemisphere hydroelectric generation and spiked demand for air conditioning. As the worst of Covid-19 lockdowns passed, a strong rise in China’s manufacturing, and increasingly elsewhere, saw gas-molecule and electric-power demands surge to restock goods for sale. Moving these goods has raised liquid fuel demand, soon to be joined by rebound in air transport.

The impact has been to see power generation fuels prices boom for thermal coal and LNG. This was first evident in China, and now that impact is going global.

Chart-2 – Europe joins Asia in the scramble for power station fuels. US gas moving up as well. (Last traded price compared to average prices since 2012.) 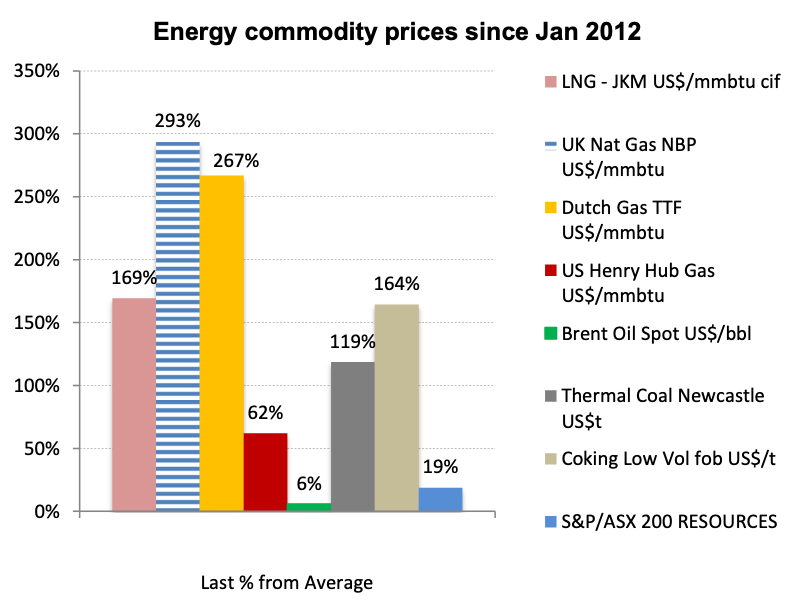 Many investors are aware of thermal coal’s spectacular rise in 2021 to record levels. Current thermal spot price is ~US$180/t is around 120% above its average price since 2012 and statistically, at a highly significant 4 standard deviations above that mean price.

Less heralded has been North Asia’s need for extra thermal generation that has seen LNG spot prices also rise strongly from US$2/mmbtu to over US$25/mmbtu, with last spot price trading at over 160% above its average price since 2012.

However, the greatest impact has been in Europe, despite a significant shift to renewable energy. With carbon credit offset prices near to all-time highs (see Chart – 3), the need for gas has been accelerated to meet its other energy input shortfalls. Both Dutch and UK gas prices are over 260% above their mean price over the last decade. That’s painfully for utilities and power consumers.

Europe’s own gas supply is stalling and more LNG import facilities and the recent completion of the Russia to Germany Nord Stream gas pipeline are ways to deliver this vital transition fuel into the future.

While we see gas prices in Europe and across the world will likely fall back from current extraordinary (and unsustainable) levels, they are likely to consolidate at above average prices.  This is particularly going into the Northern Hemisphere winter, where security of supply is the new focus. 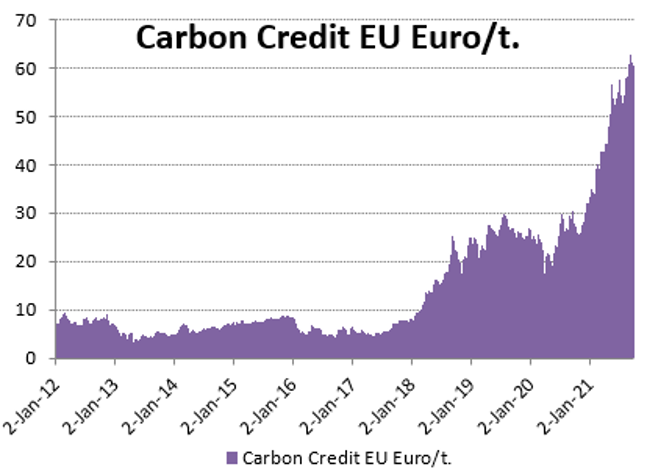 US is gas rich – yet prices are up

The US shale revolution delivered a big lift in dry gas and oil production. The latter also produced gas as a co-product that for years has seen depressed price levels of under US$3/mmbtu. However, there has been a rise of US LNG shipments and gas exports to Mexico, plus in 2020 a plunge in the US drilling effort. Combined with post-Covid-19 activity bounce – the US’s excess gas inventory already been consumed. See chart – 4 where current gas inventory is lower than 5-year inventory averages, which indicate strengthened fundamentals for gas pricing. While higher gas and oil price will attract more drilling, the activity rise may be dampened as many US gas producers have hedged over 50% of output at lower prices, retarding growth of free cashflow. 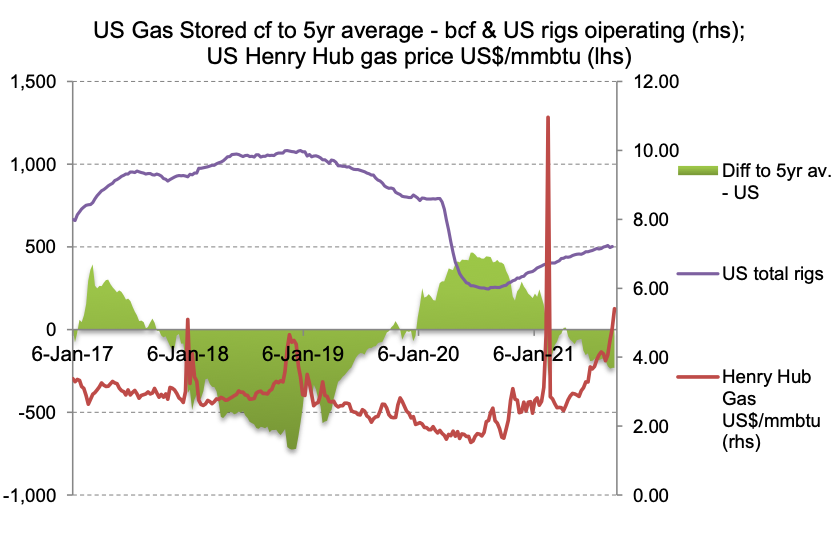 In Chart -2 the Brent oil price at $75/barrel is barely 6% above its average price level since 2012. Compared to coal and gas, oil is both cheap and a clear laggard as OPEC still has spare production capacity.

Strong gas prices are also supportive of oil, particularly if the Northern Hemisphere endures a harsh winter or experience energy supply interruptions. Oil may be used to bolster power generation – and result in an unexpected reduction in OPEC’s spare capacity.

The last 15 months have proved difficult for the Australian Energy index. Despite recovering energy prices, this segment fell in value, see chart – 5. Yet, the market is recognising some of the commodity price benefit in coal stocks like Whitehaven.

Could it be the turn of oil & gas stocks like Woodside Petroleum to also be re-rated? 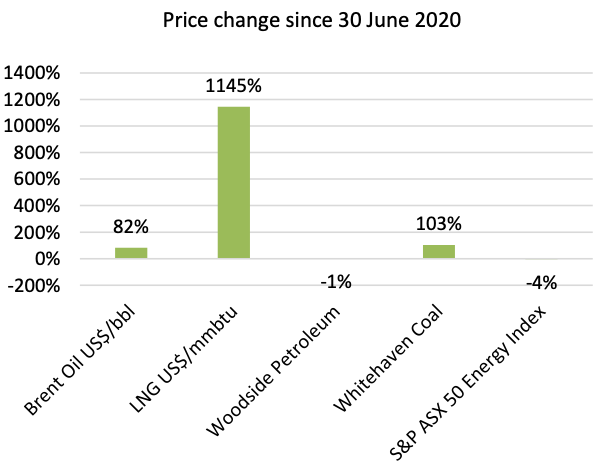 Disclaimer -This communication is in no way a recommendation to deal or trade in any security, and readers are urged to obtain appropriate advice prior to making any investment decision.
SHARE THIS ARTICLE: