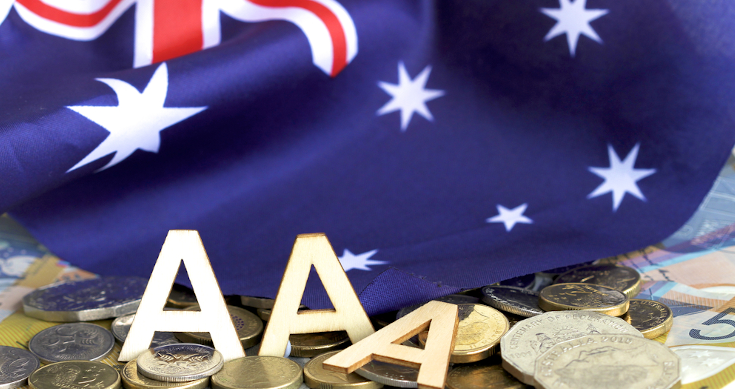 So much for the credit ratings agencies’ view of Australia.

Back in July 2016 (after the then Federal election) Standard & Poor’s put Australia on downgrade watch, signalling that the most likely next move would be to cut the country’s AAA credit rating.

At the time all three agencies – S&P, Moody’s and Fitch – had Australia on a AAA stable rating.

In a negative assessment about Australia’s ability to manage its budget following the election (which saw the Coalition returned), the agency said it had put the rating on a “negative” outlook from “stable”.

That was the view for S&P, despite the budget not suffering through the turmoil of the change of leadership in 2018 and the move by Scott Morrison to PM.

The rating was restored to AAA stable, but in April 2020, S&P was at it again – putting Australia’s AAA credit rating back onto a negative outlook, saying there had been a “substantial deterioration” in the nation’s finances and the country faced the risk of a deep recession because of Covid.

In May last year Fitch, the third ranked ratings group joined S&P in moving Australia to a AAA negative outlook and in February of this year reaffirmed that rating.

Then in March of this year S&P issued another warning, saying any slippage in the Morrison government’s projected reining-in of its budget deficit blowout could trigger the loss of Australia’s AAA sovereign credit rating.

The comments from S&P Global Ratings added to the then belief that Australia had to wind back its stimulus spending and tighten fiscal policy starting with the 2021-22 federal budget.

Nothing of the sort happened – the deficit remains high, debt remains high and the economy is booming – though the projected debt and deficit for the June 30, 2020-21 budget year will be much lower than forecast at the start of this year.

So yesterday, S&P Global ratings didn’t cut Australia’s rating but restored it to the stable outlook from the negative footing it had been on for most of the past five years in what was something of a surprise.

S&P cited the country’s “swift economic recovery” from the COVID-19 pandemic driven recession and the ratings group said the economy has rebounded sharply to above pre-pandemic levels thanks to the country’s successful handling of the coronavirus pandemic together with massive fiscal and monetary stimulus.

S&P said it was more confident now that the government’s fiscal deficit will narrow toward 3% of gross domestic product during the next 2-3 years after reaching a 10% deficit in the year-ending June 2021.

“The government’s policy response and strong economic rebound have reduced downside risks to our economic and fiscal outlook for Australia,” S&P said in a statement.

S&P said its concern over Australia’s high level of external and household debt has been moderated by the country’s strong track record of managing major economic shocks.

Australia is one of just nine countries in the world to boast a ‘AAA’ credit rating from all three major ratings agencies.

Australia is among a handful of countries globally that can say the economy is now larger than before the pandemic.

On average, Australia’s rich world peers are 2.7% smaller than they were before the pandemic, according to research by Deloitte Access Economics, with the United Kingdom shrinking almost 9%, the European Union contracting by 5% and the US 1% smaller. And unlike many other economies, Australia’s employment levels are bow back around pre-pandemic levels as well.

Data out earlier showed Australia’s job advertisements climbed for a 12th straight month in May to reach the highest since 2008, prompting economists to predict the country’s unemployment rate would fall to 4.4% by end-2022 from its current 5.5%.