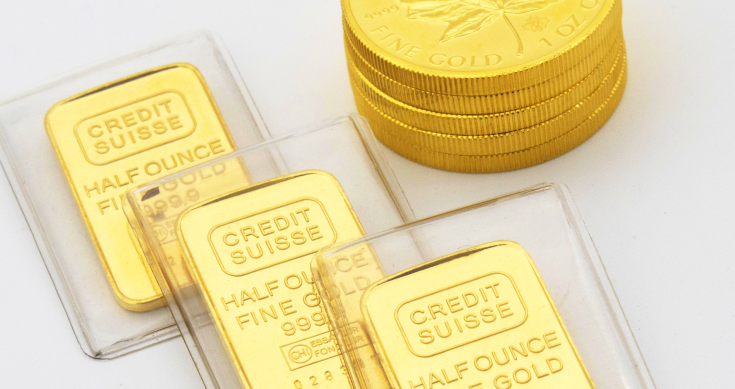 Gold’s response to changes in US Treasury yields persisted through April, as prices trended to a monthly high of US$1,798 per ounce at one point while, at the same time, 10-Year yields fell to a monthly low of 1.53%. Yields subsequently reversed course from their lows and gold eased to US$1,770.55—eventually ending the month with a gain of US$63.55 (3.6%).

Gold stocks trended higher than gold with the NYSE Arca Gold Miners Index gaining 4.8% over the month. Senior/major gold miners have been outperforming gold since mid-March and on April 15 GDMNTR broke out of its correctional downtrend. Outflows in the VanEck Vectors Gold Miners ETF (GDX) since January also reversed course. While further evidence is needed to confirm the break-out – i.e., more persistent, positive performance – we believe gold stocks might just be reflecting an end to the recent, ongoing correction in gold.

The US dollar index (DXY) failed to advance during the month, despite the late move in yields and positive economic indicators in manufacturing, jobs, retail sales, and consumer confidence. DXY’s April decline marks a pause in the dollar’s strength which has, otherwise, been mostly resilient so far.

In its first 100 days, President Biden’s administration has unveiled a US$1.9 trillion pandemic relief plan, a US$2.25 trillion infrastructure plan, and a US$1.8 trillion American families plan. The US dollar’s weakness might be in response to this unprecedented deficit spending and plans for higher taxes. Over the past year, the gold market has been driven by yields, while the US dollar has been a secondary driver. However, if the US dollar goes into a persistent decline, it might again become the primary driver for gold.

The World Gold Council reported net central bank purchases of gold in excess of 95 tonnes during the first quarter. This was surprising to us, given China and Russia’s lack of involvement in the buyer’s market and central bank demand stumbling after the pandemic had set in. Most of the buying came from India, Kazakhstan, Uzbekistan, and Hungary.  We believe the lack of consistent buying by China and Russia likely underlies the World Gold Council’s characterisation of central bank demand as “large, sporadic purchases and sales”. Nonetheless, many countries still see a need to increase reserves and general central bank demand looks to be trending back to pre-pandemic levels.

The price chart below depicts gold’s correction from its peak of US$2,075 per ounce in August 2020. We believe price trends have formed a “pennant pattern” (in technical analysis, a term used to describe a security’s continuous pattern of consolidation then breakout) which will last, at most, into the summer when gold either breaks above the pennant with strength, or else falls below with weakness.

Our best guess is: Gold successfully tested the base of the bull market trend in March with a double-bottom and is now positioned in the middle of the pennant where the base is around US$1,700 with a top at US$1,870, in our view. If the advance in US bond yields has run its course—and if the US dollar has resumed its general downtrend—then two major headwinds to gold will have been removed. Gold stocks are reacting as expected and the systemic financial risks we often talk about have not gone away. Thus, our guess is that by mid-year, gold may successfully test the top of the pennant to confirm the bull market trend.

The drop in gold prices below US$1,700 in March did not unerve miners, who continued to report strong cash flow. Cost guidance and forecasts for 2021 have been registered across the Senior/Major and mid-tier producers*. While most analysts see low, single-digit cost inflation this year, longer-term forecasts see all-in sustaining costs (AISC)** remaining around US$1,000 per ounce. We estimate the average 2021 AISC to be 4% higher than 2020, at US$1,047 per ounce for our coverage universe.

The main drivers of higher 2021 costs include:

Other cost drivers that may surprise in 2021 are steel prices and currency strength in Canada and Australia. In its latest quarterly earnings report, Caterpillar also warned of chip shortages that may impact equipment production in the second half.

Companies are doing a better job of controlling costs in this cycle than we have ever seen. The AISC chart below shows how costs have risen and fallen with the gold price historically. Notice how costs have remained around US$1,000 as the gold price rose to over US$2,000 in 2020. Scotia estimates a small decline in costs through 2023.

Costs have been contained because companies are more focused on operational efficiency and less obsessed with growth. Building mines is fraught with risks, so companies no longer attempt to build multiple mines at once. In this cycle, companies are sequencing developments at a more manageable pace to avoid costly mistakes. More capital is also being used to fund lower risk brownfield projects that typically carry higher returns than new developments.

Another major contributor to containing costs is the adoption of new technologies. For example, Newmont recently announced its first production from an autonomous haulage system at its Boddington gold and copper open pit mine in Western Australia. Autonomous haul trucks have lower maintenance, fuel, and labour costs than traditional haul trucks. Once the system is established at Boddington, Newmont will look to implement autonomous haulage at other mines globally.

It’s not just the seniors/major gold miners who can benefit from technology either. Junior developer Osisko Development Corp, for example, is testing an ore sorter at its Cariboo Gold Project in British Columbia. Ore sorting can only work in deposits that have the right mineralogy. It uses optical or x-ray transmission sensors to remove unmineralized material from the mill feed. This increases the grade and lowers the tonnage that must be processed. Results have been very encouraging. Compared to traditional processing, Osisko’s tests show 50% less material passing through the plant, processing and capital costs reduced by 25% to 30%, 50% less process water used, 50% less power to the concentrator, and 50% less tailings capacity needed.