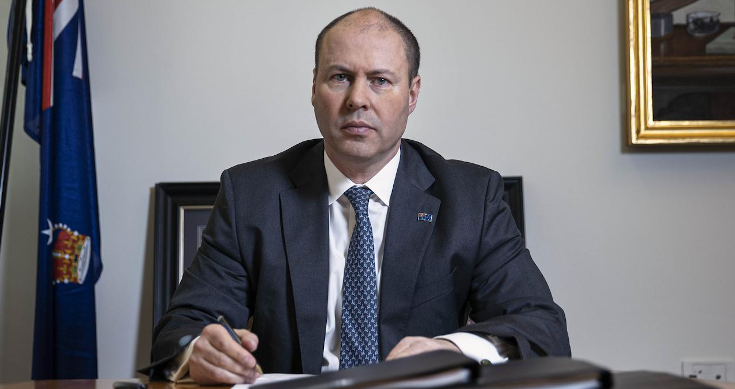 This is a two-year budget, although its covers the 2021-22 financial year.

The bottom line is that the Morrison government will spend more than $74 billion with the aim of creating more than 250,000 jobs over the next two years using a mix of income tax cuts, business tax breaks and an unprecedentedly large outlay on social services ranging from aged care to women and mental health.

This makes the budget as much an election document – the next federal poll has to be held before May next year and the 2022-23 budget as it is for the coming financial year. The 1.7 billion worth of childcare benefits do not start to July 2022, well after the election – a classic carrot and stick offer.

Treasurer Josh Frydenberg’s third budget is looking to keep jobs to the forefront of fiscal policy, as it was in 2020-21 with ideas such as JobKeeper, JobSeeker Homebuilder and the myriad other spending programs that helped keep the economy and Australians afloat during the pandemic and lockdowns.

It’s aimed at cutting unemployment and in doing so trying to boost wages and inflation by 2024. On the figures in the economic forecasts with the budget 2023 will see wages growing by an estimated 2.25% (which is the same as the forecast from the Reserve Bank last Friday) and inflation will be around 2.25%. That’s a touch higher than the RBA’s forecast of 2%.

The RBA thinks it will be 2024 at the earliest before inflation is “sustainably” in its 2% to 3% target range and the unemployment rate is well under 5% 9around 4.5%) and wages growth is around 3%.

These forecasts depend on the success of the vaccination program and the timing of the re-opening of the borders to tourism, students, migrants and skilled labour. Mid 2022 seems to be the budget estimate for that re-opening to start. Even then the chances of the jobs, wages and inflation forecasts being met by the RBA’s target year of 2024 still looks problematic.

The Budget reminds us that the pandemic hasn’t gone – its still with us as the surprise cases in Victoria and Sydney in the past week attest, and billions more will be spent this year (close to $2 billion in fact) taking the total so far in the fight against Covid to an estimated $20 billion.

The idea of this budget is to use fiscal policy to work in tandem with the continuing super easy monetary policy stance (including record low interest rates) of the Reserve bank to offset the weakest link in the economy at the moment – the closed borders and restrictions on tourism, migration and skilled labour.

The budget assumes Australia’s international borders will remain closed until the middle of next year. It projects lasting deficits and almost $1.2 trillion in gross debt in 2025 despite the economic rebound.

But because of the strength of the recovery in the past 9 months, the level of debt and deficits have been revised down from the estimates in the last budget and the December update.

The 2020-21 deficit (June 30) has been revised down by $52.7 billion from $213.7 billion to $161 billion. That’s thanks to the rapid recovery in the labour market, the higher-than-forecast iron ore price and better than forecast terms of trade which will see higher tax revenues this year and next.

This improvement in jobs and taxes has seen deficits in the three years from 2021-22 revised down another $29.4 billion. But the cumulative figure will still add up to $285.4 billion.

The deficit in 2021-22 is estimated at $106.6 billion, only $1.9 billion down on whatTreasurer Ferydenberg forecast in the mid-year update.

Infrastructure again forms a big part of the spending – $15.2 billion over ten years for infrastructure projects across the country (which is not that much if you think about it – just $1.5 billion a year).

For business there’s an extension of the full write offs. The temporary full expensing for businesses with a turnover below $5 billion will be extended for 12 months. Eligible businesses also able to deduct the full cost of assets, with loss carry back also extended.

There’s tax relief for around 1,000 small brewers and distillers – that’s a big issue in Tasmania and southern WA among small whisky and gin makers.

The federal government claims these measures amount to $20.7 billion in tax relief over the next four years and will drive new investment. But that depends on the level of investment by business.

On income tax there’s a $7.8 billion extension of the tax relief for 10.2 million people who are low and middle-income earners through the Low and Middle Income Tax Offset.

HomeBuilder has also seen an extension – it ended officially on March 31 but the budget reveals more than $800 million worth of measures targeting home ownership and first-home buyers and of that $774.8 million over two years will go towards extending the HomeBuilder grant so that applicants can start their construction over an 18-month period, up from a previous deadline of six months.

The budget forecasts an extra $110 billion in revenue over the forward estimates, much of that driven by higher iron ore prices which have contributed to a sharp upgrade in expected company tax receipts.

The strong sharemarket has also delivered a windfall to the government, with superannuation taxes upgraded by 43% this year and 20% next year. Luxury car tax collections have been revised up by 42%. Many of these luxury cars are hybrids.

But there was no money in the budget for electric vehicles, despite big spending plans in other countries to promote their ownership and use.

A new “patent box” will let people who make money from new patents developed in Australia be taxed at 17% – a little more than half the company tax rate.

Now can we forward date our buy now and pay later idea?