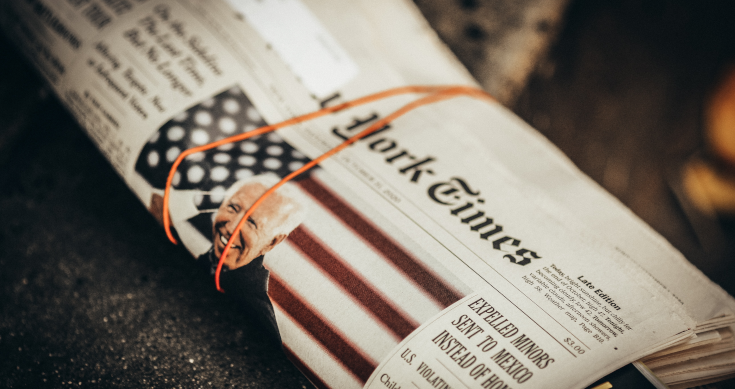 Donald Trump’s boosting of the New York Times subscription growth slowed to its lowest rate in over a year in the three months to March as the news cycle cooled with the accession of Joe Biden to the Presidency.

The Dow Jones figures includes subscribers to not only the Wall Street Journal, but Barrons, Marketwatch (now with a paywall), the Dow Jones Newswire and a suite of allied business products, especially in the area of compliance. The New York Times subscribers include people paying for accessing the paper, crosswords and puzzles, cooking and romance parts websites – a much narrower approach than at Dow Jones.

The NYT Co. said it added 301,000 digital subscribers in the first quarter, its lowest gain since the third quarter of 2019. At the end of March, the Times had more than 7.8 million total subscriptions across digital and print – with close to 7 million digital-only subscriptions, 75% of which came from its core news product.

The company reported adjusted operating profit of $US68 million, up 54% jump from last year, as cut-price promotional rates ended and subscribers moved to full priced deals.

Total revenue rose a modest 6.6% to $US473 million. Online subscriptions and digital advertising together rose 32%, to $US239 million, and the print business continued its steady decline. Advertising revenues fell to $US97 million in the quarter and were down 8.5% since the first quarter of 2020. The company claimed it had expected a bigger fall in the quarter. easing the pain was a surprise rise in digital ad revenues to just over $US59 million.

Of the $US473 million reported in total revenues, subscription sales rose 15% to $US329 million (up from $US286 million a year earlier) and of that digital subscriptions jumped 38% to $US179.6 million. The surprise came from advertising, which fell 8.5% to $97 million which was a smaller than expected fall. Digital advertising revenues rose more than 13% (instead of a forecast fall) to $US59.5 million, largely from more direct sales of display banners and podcast commercials, according to the company’s earnings report.

Digital news-only subscriptions grew by 167,000 in the three months to March, and digital non-news Times products, such as the Times crossword puzzles or NYT Cooking, grew from 1.6 million to 1.7 million. Print subscriptions generally remained static at around 800,000. The latter was down from an estimate of 833,000 in a February report on the December quarter’s performance. The company says it remains on track for 10 million subscribers by 2025.

Contrast the Times with the Dow Jones company and Wall Street Journal, owned by News Corp.

News said in its March quarter earnings release on Friday that subscriptions to Dow Jones’ consumer products reached a record 4.27 million average subscriptions for the quarter, up 19% compared to March, 2020 quarter.

That means print subscriptions to the Journal were around 743,000 at the end of the quarter, still ahead of the 600,000 for the Times. In terms of total subscriptions to all products (The Dow Jones Co has a host of products in the compliance and news service areas), the NYT at a total of 7.8 million subscribers at the end of March, remains well ahead of the Dow Jones figure of 4.27 million.

The Times has more than 5 million subscribers to its news, close to double the 2.63 million for the Journal.