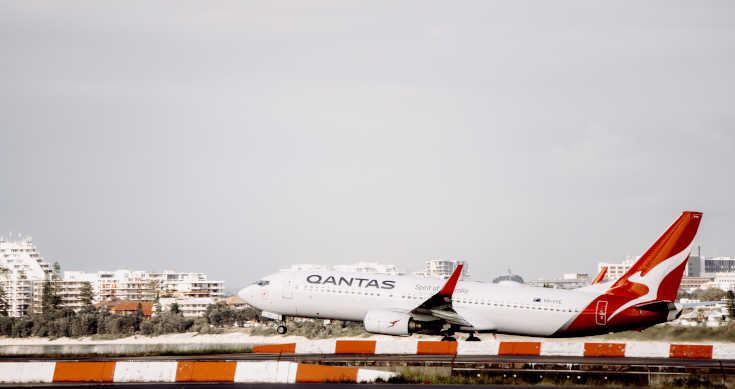 A win and a loss for Qantas yesterday but the new community transition cases of Covid in Sydney provided the spark that sent the shares down 1.4% to $4.74, the lowest they have been for nearly three months.

One case on Wednesday and another on Thursday saw a series of temporary restrictions introduced in Sydney with mask wearing indoors and on public transport a key move but it was the restrictions interstate and in NZ that impacted Qantas and weakened the shares.

NZ suspended the quarantine travel bubble for 48 hours from 11.59pm on Thursday for flights from Sydney (and any more cases in Sydney will see that extended, it seems). Queensland also introduced restrictions.

The news bumped travel and tourism related stocks lower on Thursday with Qantas shares weakening from an early gain on news of a new deal for its major HQ’s and maintenance businesses from three state governments which offset the negative of the looming rejection of a controversial deal by a key regulator.

The win was its ransom attack on the NSW and Victorian governments which proved successful with the airline keeping is HQ in Sydney and the Jetstar HQ in Melbourne, as it had been, but not before getting more freebies from worried politicians.

The loss was the thumbs down from the competition regulator, the ACCC to Qantas and Japan Airlines establishing closer links on flights between Australia and Japan.

The airlines announced in December intentions to form a joint business to serve customers travelling between Australia, New Zealand and Japan and support the tourism industry’s recovery when international flying resumes.

The ACCC chair Rod Sims said in a statement that an agreement for coordination between two key competitors on the route breached competition laws and the elimination of competition would benefit the airlines at the expense of consumers.

“The ACCC can only authorise these agreements if the public benefits from the coordination outweigh the harm to competition,” Mr Sims said.

“At this stage we do not consider that Qantas and Japan Airlines’ proposal passes that test.”

“This proposed coordination would appear to undermine competition significantly by reducing the prospect of a strong return to competition on the Melbourne – Tokyo and Sydney – Tokyo routes when international travel resumes,” Mr Sims said.

“Granting this authorisation would seem to eliminate any prospect of Qantas and Japan Airlines competing for passengers travelling between Australia and Japan, as they did before the COVID-19 pandemic.

The ACCC said it considered Qantas and Japan Airlines combining their operations would also make it more difficult for another airline to seek to launch flights on these routes.

The watchdog is seeking submissions from interested parties in response to this draft determination by May 27 and will make a final decision after consideration of those submissions.

Less than hour before the ACCC draft determination was issued Thursday morning, Qantas announced that it will keep its head office in Sydney and its budget arm Jetstar based in Melbourne.

The decision came after the airline successfully extracted tax waivers and other subsidies from governments to keep jobs in their states.

The airline announced a review of its property locations last September in the wake of its $2.7 billion pandemic-inflicted loss in 2019-20 and the prospect of more red ink to come.

The airline made it clear it wanted better financial incentives from NSW, Victoria and Queensland to shift or retain up to 7,000 jobs. The three governments fell over each other to offer new deals with the predictable outcome – no change, but more taxpayers money in Qantas’ accounts.

Qantas said on Thursday morning that it had decided to retain its footprint broadly as it was before the pandemic, with its head office based in Mascot, Sydney; Jetstar based in Melbourne’s Collingwood and its heavy aircraft maintenance based at Brisbane Airport.

Agreements being finalised with state governments would deliver a “range of benefits” in return for the commitment on jobs and investments, including payroll tax waivers, tourism marketing funding, property rebates, training support and “direct incentives”, the company said in a statement to the ASX.

“Each state put a lot of effort into their offers,” Qantas chief executive Alan Joyce said.

“Moving one or both of our headquarters was always a live option and there were times in the process where that seemed to be the most likely outcome.

Ultimately, once the final offers were assessed on a like-for-like basis, the set of decisions we made was the most beneficial to the Group overall,” he said.

And just what were the deals? Don’t ask. All Qantas said in the announcement was:

“Once agreements are finalised, Qantas will receive a range of benefits for these commitments, including payroll tax relief, tourism marketing funding, property rebates, training support and direct incentives – all of which are designed to reflect and help increase future economic activity generated by the Group. The total value of these incentives will roll out over multiple years and will remain commercial in confidence.”