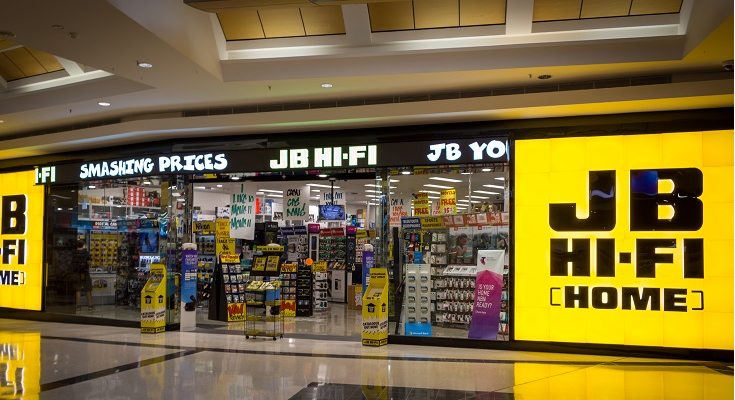 At this pace you’d have to wonder if the high level of payout can be sustained going into 2021-22.

Investors are convinced, the shares rising more than 3% to $52.44 at the close on Tuesday.

Net profit almost doubled, rising 86.2% to a record $317.7 million off the back of an electronics spending spree driven by heightened stimulus and COVID-19 lockdowns forcing more people to work from home.

It said January sales at the business continued to grow in line with the prior six months, up 17.3% at JB Hi-Fi Australia (the core business) and 14.1% at its whitegoods chain The Good Guys.

But that solid performance in January is much slower than the 23.7% gain over the six months to December.

Sales across the half were driven largely by a 25.8% jump in sales of typical stay at home products such as computers (laptops especially), gaming consoles, phones and small appliances.

While DVD movies sales fell (streaming video is rising in popularity), but spending on video games and music rose.

JB Hi-Fi enjoyed a 161.7% leap in online sales in the half, which now make up nearly 14% of the business’ total sales at $678.8 million. Tat’s much higher than the 120% to 11% share held by online sales across all retail sales, as reported by the Australian Bureau of Statistics.

The Good Guys saw a similar trend, with refrigerators, portable appliances, televisions and computers booming as customers ‘cocooned’ inside.

JBH said it did not receive any wage subsidies through 2020 and continued to pay landlords rent.

Despite the upbeat start to 2021 JBH again withheld guidance for the rest of the year, pointing to ongoing uncertainty with COVID. It could have also pointed to the continuing concerns about employment if the JobKeeper and JobSeeker payments end in late March totalling, or are reduced.

The lift in the interim dividend though tells us the board and management are confident of a solid second half – there was no keeping back a reward to shareholders in case the June half sees a slide (it will see a slide in the pace of any sales growth simply because it will be compared to the explosion in sales from March 2020 to June the same year.