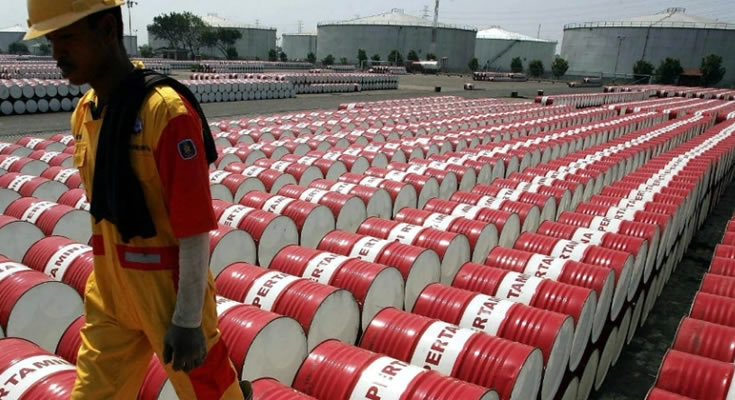 World oil prices climbed to their highest levels in more than eight months on Wednesday, as traders ignored a worsening in the US jobs market and a rise in oil rigs in use across America’s oil producing regions for a 10th week.

Instead, traders used a weaker US dollar and continuing confidence about the successful use of vaccines in 2021 to chase prices higher.

A surprise near 800,000 barrel drop in weekly US crude inventories helped extend the rally as did a growing belief that OPEC and its allies will not cut their production cap from January 1, as planned.

Both benchmarks rose for a fourth straight session, to their highest since early March when prices were sliding as the pandemic and lockdowns slashed demand (and prices).

Crude oil stocks fell by 754,000 barrels last week, according to the US Energy Information Administration showed – a surprise given the market had been looking for a small rise.

Inventories at Cushing, Oklahoma, the delivery hub for WTI crude, fell by 1.7 million barrels which helped maintain the rally.

The number of Americans receiving unemployment benefits rose to 778,000 last week in a surprise, from 748,000 the week before a Reuters poll had forecast 730,000 applications.

On the demand side, a fall in US demand for petrol in the week before the Thanksgiving holidays underlined the fraught nature of American life and demand for oil.

That’s a signal that people are not driving as much with winter and COVID-19 related lockdowns, curfews, and other restrictions spreading across the country ahead of a weekend when millions of Americans drive or fly. Airline travel is down on a year ago as well, meaning weaker demand for jet fuel.

Reuters reported that the OPEC+ group is leaning towards delaying next year’s planned increase in output despite a rise in prices.

The OPEC+ group is due to raise output by 2 million barrels per day (BPD) in January – as it moves to ease this year’s record supply cuts. With demand weakening, OPEC+ has been considering delaying the increase. There’s a meeting early next week to discuss the situation and a delay is now considered certain.

The confidence in the oil market continues to discount rising rig use numbers.

The weekly Baker Hughes data shows that for the 4th month in a row, the number of active rigs (especially oil) across the US rose.

The oil and gas rig count, an early indicator of future output, rose 10 to 320 in the week to November 25, Baker Hughes Co said weekly report (that was released two days early because of the holidays).

November saw a rise of 24 rigs, the 4th monthly rise and the first four-month gain since the end of 2018.