While Australian recorded another $8 billion-plus trade surplus for the month of June, there was a never seen before 60% plus surge in the size of the surplus for the financial year to June 30.

For the financial to year to June, the Australian Bureau of Statistics said yesterday the surplus was a record of more $77.4 billion (In original terms, not seasonally adjusted).

That resulted from a $22.4 billion (5%) drop in imports (especially from December to May)and a small $5.9 billion (1%) increase in exports which were held up by the continuing surge in iron ore exports which topped $100 billion in 2019-20.

AMP Chief Economist, Shane Oliver says the “The rise in Australia’s trade surplus to $8.2bn in June from $7.3bn in May reflected a 3% rise in exports driven by a surge in non-monetary gold and continued strength in iron ore exports and a 1% rise in imports.”

“The hit to the rest of the economy will have still resulted in a big decline but its more likely to be around -7% or -8% quarter on quarter than say the -9.5% seen in the US or the -12.1% seen in the Eurozone,“ Dr. Oliver wrote yesterday. 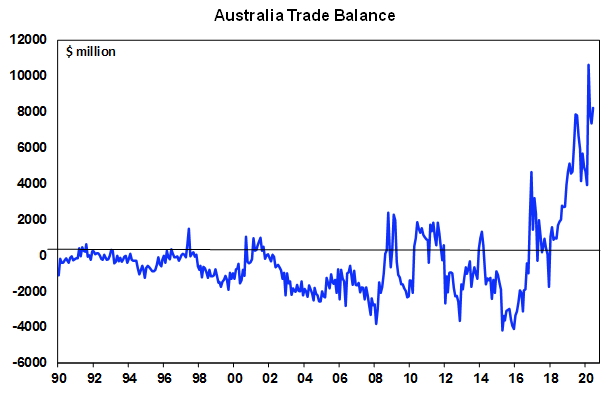