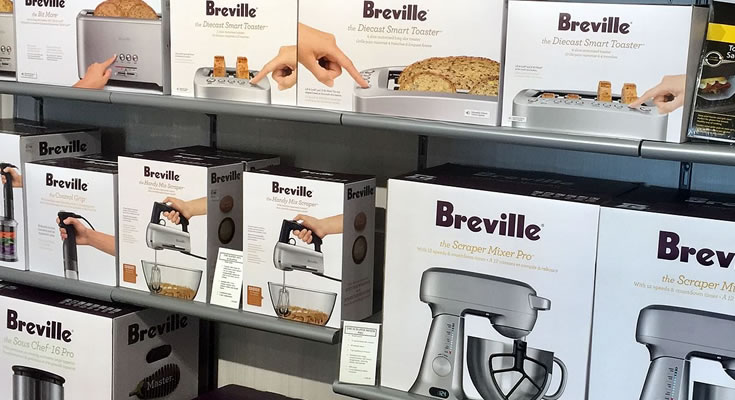 Is there a significant prize on offer for investors in Breville Group ((BRG)), which designs, develops and distributes small consumer appliances? Morgans believes so, initiating coverage of the stock with an Add rating and $27 target.

Macquarie, too, considers Breville an attractive portfolio holding for the long-term because of the growth potential. While trading patterns over the next 6-12 months are hard to forecast, the broker assumes any macro-economic headwinds will be countered by continuing expansion.

Revenue growth increased to 18% in FY19 and Morgans forecasts 24% for FY20. The company’s brands cover three key segments such as cooking, beverages and food preparation and are sold in 70 countries, and this is just the beginning the broker asserts.

Europe remains the most attractive target in the short term but there are longer-term opportunities in the Middle East, Latin America and Asia. Morgans assesses expansion across European geographies could add around $300m in incremental revenue.

The main downside risk over the short term is potential for the pandemic to affect sales, given the exposure to retailers and consumers, although to date there has not been a material slowdown.

Revenue grew 32% over the first four months of the second half of FY20 and Morgans suspects Breville benefited from the stay-at-home environment, which boosted demand for coffee, food preparation and cooking products.

However, this was offset by the closure of retailers during lockdowns. Moreover, UBS flags the potential for purchases being pulled forward during a working-from-home environment.

Breville has pointed out sales to May were strong in Australia and the UK, while the US and Europe lagged, given significant retailer restrictions in these jurisdictions and a temporary shut-down of Amazon Prime.

Ord Minnett had little doubt Breville was in a better position to withstand the virus compared with many of its competitors because of higher-than-normal inventory levels as the business ascertained some risk surrounding Brexit earlier in the year.

The main issue now, Morgans believes, is the performance over the first half of FY21 and how a recession will impact demand. Hence a moderation of revenue growth in FY21 is expected before a rebound to 14% in FY22.

Given the inability to travel internationally and residual concerns around public gatherings, consumers with job security may allocate expenditure towards home categories nonetheless.

A $104m equity raising and refinance of debt in May means Breville should be well placed to overcome the short-term risks. The company has significant seasonality embedded in its working capital, peaking in November each year and April/May being the low point.

Ord Minnett points out management did signal a charge of $4.5m was taken in May related to a customer that went into voluntary administration but, excluding this, at the end of April around 91% of receivables remaining were either insured or related to two large multinationals with low credit risk.

Macquarie calculates total debt facilities are now $385m and there is $497m in total liquidity. The increased debt facility means there is headroom for opportunistic acquisitions post completion of the investment in IT.

Morgans forecasts 15% three-year compound growth in revenue with the bulk coming from Europe and North America, with Australasia being more modest. Revenue and earnings growth has been resilient over the past five years amid continued product development and market expansion.

While considering the shares are somewhat fully priced, Ord Minnett remains impressed by the revenue growth and expects the current trajectory to continue as the company capitalises on opportunities that are driven by market disruption.