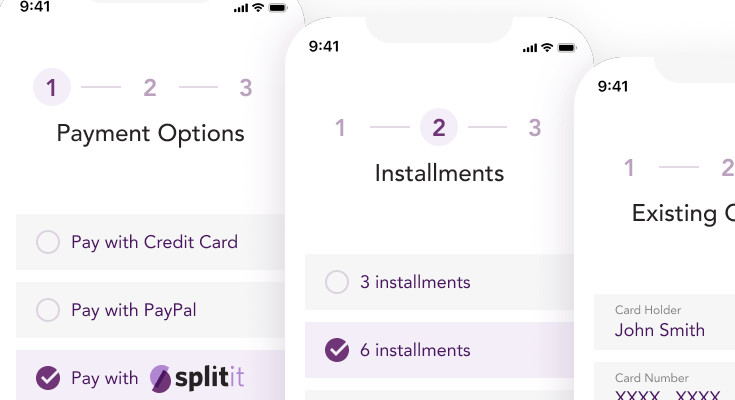 The recent stellar price gains of buy now, pay later (BNPL) fintech stock Splitit – which has rocketed from 22 cents at the Coronavirus Crash trough (23 March) to $1.52 – have drawn the inevitable comparisons with sector superstar Afterpay, but SPT has a long way to go match Afterpay.

Splitit is only a piddling ‘seven-bagger’ from its 20-cent IPO price in January 2019, compared to the ’58-bagger’ status that Afterpay has attained. Admittedly, SPT fans might say that Afterpay has had almost three years longer to post that status.

But Splitit is different to Afterpay (and its other BNPL peers), because, in effect, they lend the customers the full amount of a purchase at the checkout, and then allow that purchase to be paid off in instalments. Instead, Splitit allows customers to pay with an existing credit or debit card, holding the full amount on their card and taking an instalment each month. The customer can apportion the total cost across as many interest-free payments as they like; the Splitit system charges their credit or debit card every month until their payment is completed.

Splitit does not finance the consumer into the purchase, meaning it does not make short-term consumer loans.

This means that worries about credit risk and bad-and-doubtful-debt build-up – concerns that have swirled around the other BNPL stocks – are not business risks for Splitit. Thus, it has a lower-risk business model than the others.

It is the same value proposition as Afterpay and Zip Co, but use of Splitit’s technology requires no application, registration or credit check; thus, Splitit does not need to monitor and/or prevent payment defaults or bad debt-related risks, and is not subject to regulatory oversight or licensing requirements associated with providing new credit.

And the Israeli-founded, New York-based company is not shy about pointing that out, rightly trying to differentiate itself in the BNPL sector.

Splitit says that because it facilitates use issuers’ credit cards, it complements, rather than competes with, those credit cards: it says it is the only global payments solution that works using shoppers’ existing Visa or Mastercard credit cards.

Certainly, the major card issuers appear to be very happy to work with it: in March, Splitit announced a partnership with Visa, to help accelerate the distribution of instalment payments for merchants, and to “explore further opportunities relating to new product development.”

The company followed that in June with the signing of a multi-year agreement – with an initial five-year term – with Mastercard, to accelerate the adoption of Splitit’s instalment solution around the world. Splitit will leverage Mastercard’s network of partners to extend and scale instalment functionality to consumers and merchants. Splitit will integrate its instalment solution with Mastercard’s suite of technology as a network partner to enable merchants to deliver seamless and secure consumer experiences at checkout, both in store and online.

There’s no doubt that Afterpay is a simple and successful solution. APT makes most (about 80%–85%) of its revenue from retailer fees, which are about 3.7% per sale (the rest comes from late-payment fees). For this, the retailers benefit from being paid upfront for shoppers’ orders; increased conversion rates and basket sizes; lower return-of-goods rates; and increased referrals through the Afterpay platform. More than 90% of Afterpay users are returning customers, indicating very high customer satisfaction, which helps retailers deepen brand loyalty and increase customer lifetime value.

Splitit’s source of revenue is transaction fees, paid by the retailer when a customer uses the Splitit payment option online or in the physical store: Splitit charges an average rate of 3% of each transaction. There are no late fees. This means that the total value of transactions and number of customers using the platform are the main revenue drivers for Splitit.

And this – apart from the credit difference in the business model – is where Splitit is most different to Afterpay. Afterpay’s average transaction value stands at $150. Splitit has an older customer demographic buying bigger-ticket items.

Splitit says its addressable market is “massive” – it says this is the US$3.4 trillion ($4.9 trillion) e-commerce opportunity globally, and the 1.8 billion-plus credit cards globally with 70% of the available credit not utilised. After that, it will all come down to margins. Like Afterpay, Splitit is not profitable – but like Afterpay, its growth looks like it’s only getting started.