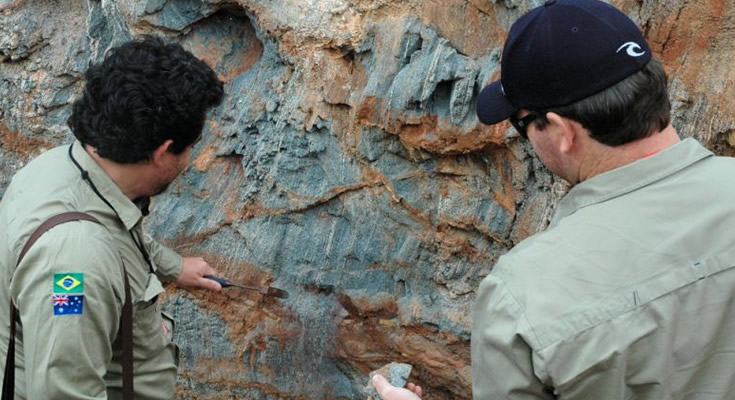 CTM is reaping the rewards of maintaining a robust level of exploration activity in Brazil. CTM has capitalised on its company-changing acquisition with respect to Vale’s 100%-owned Jaguar Nickel Sulphide Project in Brazil. Jaguar is an at-surface nickel sulphide project that hosts a non-JORC compliant resource of 40.4Mt at 0.78% Ni (at a 0.5% Ni cut-off) for 315kt of contained nickel metal. CTM is currently in the midst of a maiden 10,000-metre diamond drilling program at Jaguar, which represents the first systematic drilling by outside of the current non-JORC mineral resource envelope. Encouragingly, initial results have proven to be outstanding, confirming a significant down-dip extension of the mineralization. Meanwhile, initial metallurgical test-work on Jaguar ore has also proven to be encouraging, with results boosting metal production by +25% compared to previously announced historical test-work.

CTM is in the midst of its much-anticipated maiden drilling program at its 100%-owned Jaguar Nickel Sulphide Project, located within the world-class Carajás Mineral Province of northern Brazil.

The drilling program commenced during November 2019 and is expected to take 4-5 months to complete, comprising 55 diamond drill holes for a total of 10,000m. Three rigs are on site and are operating on double-shift, with drilling ongoing at the Onça Rosa Prospect, as well as at the Jaguar South and Onça-Preta Deposits. The objective of the program is to extend known high-grade zones of nickel sulphide mineralisation and to identify new high-grade zones within the Jaguar and Onça-Preta Deposits, as well as the Onça-Rosa Prospect.

In-fill and extensional resource drilling continues to confirm the consistency and continuity of the high-grade nickel sulphide mineralisation from surface to depths of up to 300m, with high-grade mineralisation remaining open at depth and along strike to the east. 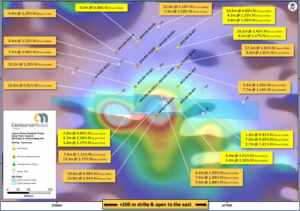 Drill-hole JAG-DD-20-021, announced during March, is located at the centre of the Onça Preta ridge and returned 14.9m at 2.94% Ni (including 9.6m at 4.19% Ni from 62.2m). The latest results include assays from shallow drill-holes that were completed 50m east and west of JAGDD-20-021, with both holes intersecting high-grade nickel sulphide mineralization. 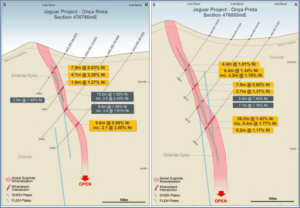 Figure 2: The Onça Preta Deposit: Cross-Sections 476790mE (left) and 476885mE (right) showing the new drill intersections (in dark yellow) with FLEM conductor plates in light blue.

Significantly, the base of oxidation lies between 5m and 20m depth, so the shallow fresh high-grade sulphide zones will require only minimal waste stripping to access – thus presenting excellent start-up open-pit mining opportunities.

From a longer-term perspective, the geometry of the Onça Preta mineralisation and the competent host granite also bode well for potential underground operations – as the deepest drill-hole so far at Onça Preta, PKS-JAGU-DH0014, has returned 18.0m @ 2.19% Ni from 318m down-hole, as well as 7.9m @ 2.18% Ni from 352m down-hole. The mineralisation remains open both at depth and to the east, where it appears to be plunging to the north-northeast below historical shallow drilling.

The nature of the hydrothermal mineralisation at the Jaguar Project points to a deep plumbing system that remains to be tested. The results from historical Vale hole PKS-JAGU-DH0014 indicates that grade may increase with depth, although further drilling is required to confirm this.

Historical drilling on section 476040mE intersected high-grade semi-massive and massive sulphides including pyrite, pentlandite, millerite and chalcopyrite along with intense magnetite alteration, returning an intercept of 7.9m at 5.27% Ni from 247.0 metres in hole PKS-JAGU-DH00158.

CTM has drilled 40m down-dip of PKS-JAGU-DH00158 and intersected more massive sulphides, returning an outstanding intercept of 9.3m at 3.13% Ni from 281.8m in hole JAG-DD-19-017, which was the deepest drill hole on the Onça Rosa Prospect at the time.

Importantly, modelling of DHEM surveys recently completed by Southern Geoscience on both JAG-DD-20-043 and JAG-DD-20-045 have revealed a strong continuous EM conductor plate that intersects the massive sulphide mineralisation seen across the 100m of strike. The main plate is over 150m long and extends to more than 150m down-dip of the deepest drilling.

CTM has now tested the strike extent of the Onça Rosa Prospect with shallower drilling to the west, consistently intersecting the mineralising structure across more than 400m of strike. Although high-grade mineralisation was not always intersected, the results do demonstrate the continuity of the mineralisation structure.

The intersection of 3.9m at 3.19 % Ni in JAG-DD-20-038 is interesting as it is very close to surface, immediately below the oxide zone and located beneath an extensive magnetite gossan sub-crop. Additional shallow drilling will be planned to test the extension of this near-surface mineralisation in the future.

In line with what has been seen across the entire project area, the DHEM surveys conducted on the shallow drilling at the western end of the Onça Rosa Prospect have produced multiple EM conductor plates below the deepest drilling that indicates the potential for semi-massive and massive sulphides at depth. Future step-out drilling of these sections are being planned. 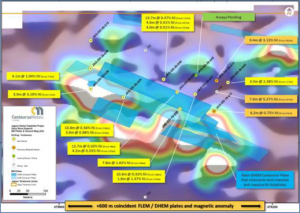 The two rigs operating on site are currently located at the Jaguar Central and Jaguar North Deposits, with first results expected during June. DHEM survey work is currently being undertaken at Jaguar Central, Jaguar North and Onça Rosa. The company is finalising the drill-hole database that will underpin the Jaguar Project’s geological model and the delivery of the company’s maiden JORC Mineral Resource Estimate, which is also planned for June.

The Jaguar project provides CTM with the opportunity to pursue development of an advanced and well-located nickel sulphide project that offers high-grade open-pit development potential.

The latest drilling results highlight the significant potential for an initial high-grade open-pit and longer-term underground mine at the Onça Preta Deposit, which is expected to form part of the company’s upcoming maiden JORC Mineral Resource estimate, along with the emerging high-grade massive sulphide potential at the Onça Rosa Prospect.

Nickel sulphide deposits like Jaguar are extremely rare globally and for CTM to be able to successfully acquire such an asset is a game-changer. The deal was assisted by CTM’s solid working relationship with Vale and their belief in the mutual benefits that can be realised under their recently rolled out ‘mini-mines’ model for base metals.

CTM remains well funded and is on target to deliver its maiden JORC Mineral Resource Estimate for the Jaguar Project by the end of June.