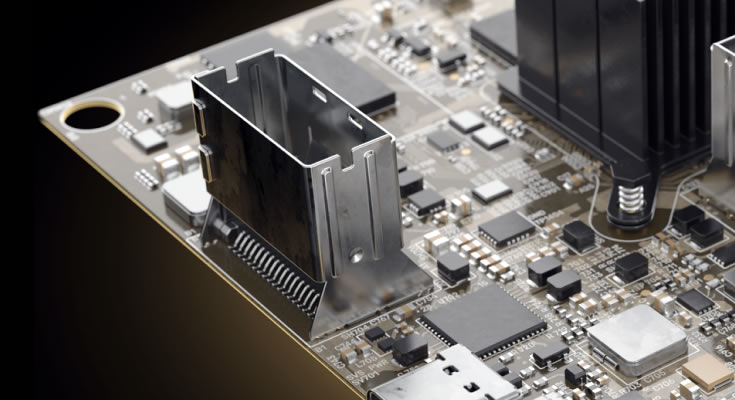 Draganfly is collaborating with Vital Intelligence, a healthcare data services company, and the University of South Australia to combine aerial drones, cameras, and data service to remotely measure health conditions.

Every summer, DJI, the world’s largest drone maker, puts on a competition in Shenzhen called RoboMaster. If amateur robotics warfare isn’t your hobby of choice, you should know that at the event hundreds of university students from China, Japan, the U.S., and elsewhere build robotic vehicles the size of lawn mowers, arm them with plastic bullets, and pit the machines against one another in front of thousands of screaming fans.

The competition was Frank Wang’s idea. For several years, the founder and chief executive officer of DJI (full name: SZ DJI Technology Co.) has attempted to turn RoboMaster into something like a cult that celebrates engineering—and, not incidentally, stokes demand for his company’s products. Along with the event, there’s a TV cartoon, a reality show, a documentary, and a comic book series. Starting last year, DJI began selling a smaller version of a battlebot to consumers as a DIY kit called the RoboMaster S1.

Countries are using apps and data networks to keep tabs on the pandemic.

Here’s a fascinating video which shows how quickly people can spread out from Spring Break (using location data from their phones).

This shows the location data of phones that were on a Florida beach during Spring Break. It then shows where those phones traveled.

First thing you should note is the importance of social distancing. The second is how much data your phone gives off. pic.twitter.com/iokUX3qjeB

Houseparty, Discord, Zoom, and Macro Polo downloads have exploded amid the coronavirus pandemic.

Doom Eternal had the best opening weekend in the franchise’s history.

Valve released Half-Life: Alyx which showcases what virtual reality can do, but its unclear if it will bring new converts to the medium.

Pokémon Go is seeing healthy revenue growth during the pandemic after they increased monster spawn rates which make it easier to see Pokémon while staying at home.

The World Health Organization and video game companies have created #PlayApartTogether, a promotional campaign that encourages people to entertain themselves while also practising social distancing.

A new VR app called Spaces allow you to attend Zoom meetings from within VR.

China created a “fail-safe” infectious disease reporting system to track contagions after experiencing SARS, but it failed due to a political aversion to sharing bad news.

“According to the rules, this of course should have been reported,” Yang Gonghuan, a retired health care official involved in establishing the direct reporting system, said in an interview. “Of course they should have seized on it, found it, gone to understand it.”

Generally known as “tele-ICU,” this two-way bedside video is sort of like FaceTime or Zoom. The difference is that it typically adds a host of other technologies to videoconferencing, in order to connect critically ill patients in hospital ICU beds with teams of doctors and nurses who specialize in delivering care to the sickest, even when those teams are miles or even whole states away.

The point of tele-ICU isn’t to replace staff on premise, but to supplement them while also keeping the scarce supply of trained intensivists physically removed from patients to minimize their risks of infection. Doctors on the other side of the screens at patients’ bedsides can help with monitoring and can even use local staff as their “hands” when they need to manipulate something in the room.

Google is using AI to design their next AI chip.

“We believe that it is AI itself that will provide the means to shorten the chip design cycle, creating a symbiotic relationship between hardware and AI, with each fueling advances in the other,” they write in a paper describing the work that posted today to Arxiv.

In a webinar this week, Zoom, Netflix, Dropbox, and Equinix discussed how they are tackling coronavirus infrastructure challenges.

The result is a big shift in usage patterns that is quite different than what many large companies had forecast. While people tend to think of the internet as a single system, it is really a patchwork of datacenters and delivery networks stitched together by a wide range of companies. Far from being virtual, making these physical networks run smoothly means betting on where the traffic demands will originate and to where they will travel in order to strategically place network capacity over time.

Bill Long, senior vice president of product management at datacenter giant Equinix, said the companies have seen spikes in traffic ranging from 10% to 40% depending on the region.

Coronavirus is leading to a boom in home entertainment usage, as you’d expect, but an analysis of media consumption during past crises suggests this will be short-lived.

Data from Nielsen, a market-research firm, indicate that people do indeed turn to the box in a crisis. Television use of all sorts in America went up by 18% in the week ending March 22nd, compared with the week before. Viewership of live television rose by 14%, while the use of video-game consoles climbed by 35%. The increase in watching live TV was especially marked for teenagers (31%); many of them can no longer go to school. Overall internet usage rose by 28%, partly because so many workers must now meet their colleagues digitally, rather than face to face.

My day job (also: night job) is CEO of Slack, a publicly traded company with investors to whom I am a fiduciary, 110k+ paying customers of all sizes, and thousands of employees I care about very, very much. The last few weeks have been ??? Here’s what it’s been like. [Thread]

Nike navigated China shutdowns by shifting their focus to online. Their online sales in Greater China increased by 30% during the quarter ending February 29, 2020, limiting the decline in Greater China sales to 5%.

After the new coronavirus confined Chinese shoppers to their homes, Nike quickly shifted focus to connecting with them digitally, and not just by pushing products on them. It continued its messaging to shoppers and engaged them with apps such as Nike Training Club, which offers members at-home workouts. Donahoe said Nike saw a spike in sign ups and engagement, with weekly active users jumping 80% across all the company’s activity apps compared to the start of the quarter.

Facebook is seeing a 50% increase in total messaging across the platform’s services, but additional usage won’t help its advertising business.

“We don’t monetize many of the services where we’re seeing increased engagement, and we’ve seen a weakening in our ads business in countries taking aggressive actions to reduce the spread of COVID-19,” wrote Alex Schultz, Facebook’s vice president of analytics, and Jay Parikh, vice president of engineering.

The company didn’t provide official earnings guidance, but the executives said “our business is being adversely affected like so many others around the world.”

HBR discussed the economic shock of coronavirus and the shape of the recovery.

Where does the coronavirus shock fit in so far? The intensity of the shock will be determined by the underlying virus properties, policy responses, as well as consumer and corporate behavior in the face of adversity. But the shape of the shock is determined by the virus’ capacity to damage economies’ supply side, particularly capital formation. At this point, both a deep V-shape and a U are plausible. The battle ahead is to prevent a clear U trajectory.

Satellite internet startup OneWeb has filed for bankruptcy after SoftBank, its largest investor, declined a request for additional funding. OneWeb had ambitions of launching a 650 low earth orbit satellite mega-constellation that would provide internet access to customers around the world; they had launched 74 satellites so far.

Researchers from Vanderbilt University are developing a prototype of a high-tech shoe (foot exoskeleton?) that could boost Usain Bolt’s top speed from 12.3 metres per second to 20.9 metres per second.

They found that the leg only supplies energy about 20 per cent of the time that a person’s foot is on the ground. To improve upon that, they have conceptualised a spring-powered device that would increase the amount of power a person’s legs generate while running.

An exoskeleton connected to each foot that contains a programmable spring would allow the leg to supply energy 96 per cent of that time, according to their analysis.

The device would store energy created as the leg bends in the air, compressing the spring, and release it when the runner takes a step. It would also lessen collisional energy loss. “I would compare this to a catapult that is pulled up in the air and then released on the ground,” says Bruan.

Coronavirus quarantines are leading to a huge, global drop in air pollution, which is also discussed in this CNBC video.

Bill Gates discussed how we must respond to the coronavirus pandemic in a 45-minute TED Talk. In 2015 Bill Gate gave this TED Talk: The next outbreak? We’re not ready.