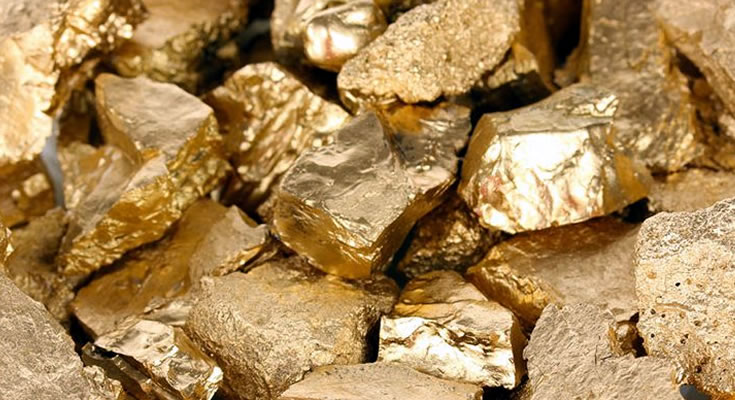 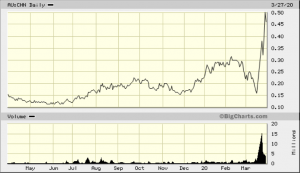 We initiated coverage of CHN during March 2019 due to CHN’s involvement in the burgeoning Victorian gold exploration scene. CHN’s primary focus is Victoria through its 100%-owned Pyramid Hill Gold Project, which encompasses a 5,190 sq km district-scale land holding within the highly prospective (and reinvigorated) Bendigo gold district of Victoria. This is a region that has produced more than 60M oz of high-grade gold, yet has seen minimal exploration under shallow cover. CHN has been actively exploring the project since early 2018 and has outlined several large-scale targets through shallow reconnaissance drilling to date. Significantly too, CHN has not raised any capital since 2011 due to its commercially-driven exploration business model that has generated net proceeds of >$100 million to date from asset sales, with more than $36 million returned to shareholders since 2012.

CHN surged in this week’s trade from a previous close of $0.16 last Friday to a high this week of $0.55 – a whopping advance.

The explanation for the market interest revolves around today’s announcement of the discovery of significant high-grade nickel-copper-PGE sulphide mineralisation at the company’s 100%-owned Julimar Nickel-Copper-PGE Project, located just 70km northeast of Perth.

Julimar is one of CHN’s generative exploration opportunities that is being progressed alongside ongoing drilling programs at its Pyramid Hill Gold Project in Victoria.

The results from Julimar are particularly significant because they involve the first-ever drilling undertaken at the project, with parallels to the discovery of the Nova nickel deposit by Sirius Resources in WA’s Fraser Range region.

CHN is in the midst of a maiden 4-hole RC drilling program at Julimar to test several high-conductance MLEM targets that were identified during Q4 2019 and appear to be associated with the margins of a discrete ‘lens-shaped’ magnetic anomaly.

Excitement has been generated by the first completed RC drill-hole, JRC001, which was drilled to a depth of 150m to provide both baseline geology for this poorly-exposed intrusive complex and a platform for down-hole EM surveying at Conductor ‘E’, located along the southwest margin of the magnetic anomaly.

JRC001 has returned a significant intersection comprising 19m @ 2.59% Ni, 1.04% Cu, 8.37g/t Pd and 1.11g/t Pt (down-hole width) from 48m (cobalt and other PGE assays are currently pending). Significantly, the massive sulphide zone coincides with the interpreted position of Conductor ‘E’, indicating that MLEM has been successful and highly effective at targeting shallow sulphides.

At this early stage, the true width of the mineralised intervals are not known, however MLEM Conductor ‘E’ is modelled as a steep westerly-dipping plate, indicating an interpreted near-true width intersection. The MLEM plate has an estimated strike length of ~140m. However, due to the strength of the conductor that masks any response at depth, it has not been possible to model the true depth extent. Therefore, the conductor is considered poorly constrained and the zone is open in all directions. 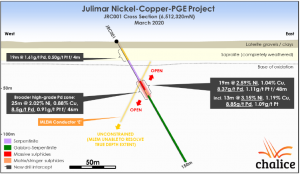 The initial result is enormously encouraging, particularly as it involves the very first drill-hole into the Julimar project, generating outstanding grades of nickel, copper and PGM from a shallow depth of just 48m. Even at this very early stage of exploration, the discovery of a shallow high-grade massive sulphide zone within a large layered ultramafic-mafic intrusion is very exciting, as it draws potential parallels with other large-scale nickel-copper-PGE sulphide discoveries worldwide.

Parallels can be drawn with the Nova discovery by Sirius Resources in the Fraser Range region of WA during 2012. In that instance, the early drill-holes delivered intercepts of between 15m and 51m, grading between at 2.8% and 4.6% nickel (plus copper in comparable ratios to the Julimar intercept). A key differential however is the high levels of platinum group metals at Julimar, which would provide an enormous boost if and when a resource is calculated/estimated. Given the recent all-time high palladium price of more than US$2,800/oz, the result is especially significant.

The second drill hole – JRC002 – is located ~900m north-east of JRC001 and is currently being drilled to test MLEM Conductor ‘A’, located along the northeast margin of the magnetic anomaly. Conductor ‘A’ is modelled as a 680m x 135m plate, located at a depth of 214m with a conductance of ~5,300 Siemens. JRC002 as of 22 March was at a down-hole depth of 184m, intersecting a sequence of intrusive mafic to ultramafic rock-types. The target MLEM plate is modelled at ~40m below the current hole depth. 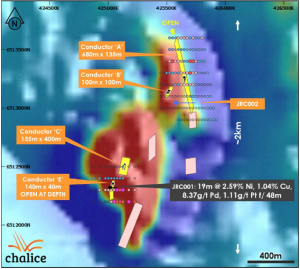 Julimar is one of CHN’s generative exploration opportunities that is being progressed alongside ongoing drilling programs at its Pyramid Hill Gold Project in Victoria. The results from Julimar are particularly significant because they involve the first-ever drilling undertaken at the project. Even at this very early stage of exploration, the discovery of a shallow high-grade massive sulphide zone within a large layered ultramafic-mafic intrusion is very exciting, as it draws potential parallels with other large-scale nickel-copper-PGE sulphide discoveries worldwide. There are also parallels with the discovery of the Nova nickel deposit by Sirius Resources in WA’s Fraser Range region. We await further results with great interest.