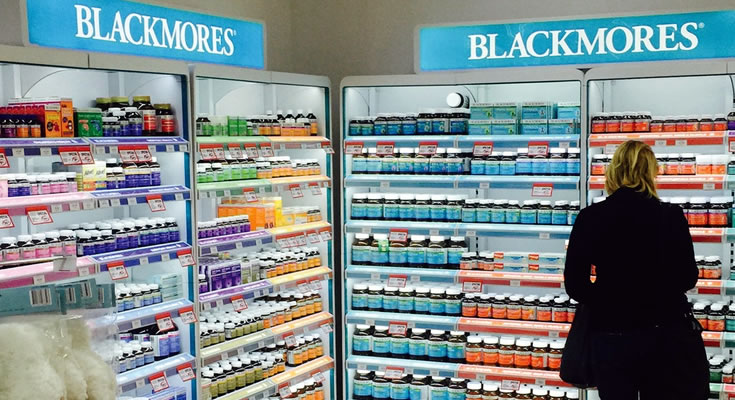 Shares in health and vitamins company Blackmores took a hammering yesterday after it became the highest-profile corporate victim (so far) on the ASX from China’s coronavirus crisis with news yesterday of a sharp fall in expected earnings and the dumping of its interim dividend.

On top of the fallout from the virus crisis, the company also admitted to the negative impact from higher manufacturing costs.

Blackmores had asked for a two-day trading halt on Monday ahead of issuing a trading update. That came before trading yesterday and down went the shares, hitting a low of $68.50 before rebounding a bit to close off 12.7% at $78.

The reason was easy to see. In the update, released a fortnight ahead of its official interim results, the company said it was expecting “at least 2-3 months of China sales and supply challenges due to coronavirus”.

On coronavirus, the company said that the outbreak had generated increased demand for immunity products in Asia and Australia. But it said that the impact of this demand had been countered by disruptions to supply chain across the region.

“In China, local guidance for businesses and schools for people to stay at home for at least the remainder of February has led to a series of interruptions. Channels which rely on free flow of passengers (duty-free, small business traders and tourists) have been impacted,” Blackmores said in Wednesday’s statement.

“Some e-commerce partners have cancelled or modified February promotions with a slowdown of China inbound and internal freight, which has made it difficult to serve the local market demand with much-needed product,” it said.

Blackmores revealed an underlying first-half net profit of $18 million, down more than 40% from $34.3 million in the prior corresponding period.

Blackmores now expects its full-year net profit to be in the range of $17 million to $21 million, which would be less than half last year’s $53 million result.

The coronavirus crisis and its impact on sales into China couldn’t have come at a worse time for the company as it battles a cost blowout and other problems linked to the purchase of a factory in Melbourne.

Blackmores bought a new manufacturing plant at Braeside in Melbourne last year and it has been a headache, as yesterday’s statement revealed.

There have been adverse impacts on its costs from higher raw material costs, “capacity under-utilization” and variations to the manufactured product mix.

“Now that management has full visibility over the cost variances related to the Braeside manufacturing site, it is apparent that the forecast product mix, volumes, and material costs will have an estimated combined adverse impact of $9.5 million on the cost of goods sold in the second half,” the company warned in a statement.

But new CEO, Alastair Symington backed the decision to buy the plant, saying it would be “key competitive advantage” for Blackmores, had several manufacturing licences and product registrations and a highly skilled workforce.

“It is critical that we achieve greater efficiencies at the site, by increasing manufacturing volumes and by better managing product mix,” he said.

He said the company was progressing plans to get better control of fixed costs and improving gross margins.

“There is a lot of work to do to restore the trust of our shareholders and we are resolute in our commitment to doing what it takes to achieve this,” he said on Wednesday.

But the message from the update is that 2020 can basically be written off.