Wall Street rallied to new highs on Friday night on more “positive” news on trade but given the Australian market heard the news first, and thus rallied on Friday, the futures were only suggesting a -3 move from the open yesterday morning.

The ASX200 dropped -44 points to midday. The new week has begun just as the last week finished – elevated inter-day volatility, contradictory moves and often inexplicable bursts. It’s not like there’s any trend. Most notably, defensives are hot one day and not the next.

Indeed the biggest falls were saved yesterday for the defensives of utilities (-1.2%) and telcos (-0.9%), with industrials flat and consumer staples edging higher thanks to a 4.9% gain for Coca-Cola Amatil ((CCL)), following an upbeat update and upgrade from Macquarie, to Neutral.

Consumer discretionary won the day with a 0.5% gain without any discretionary stock standing out. Sell defensives, buy cyclicals – anyone would think the economy’s doing fine.

Some late buying did save face for the index but the major drivers were healthcare (-0.9%), which is now in an “up one day and down the next” phase, with CSL ((CSL)) in the centre, and the banks (-0.5%), after National Bank ((NAB)), which had benefited last week by not announcing an equity raising, announced a bond issue instead. It fell -1.2%.

There was not much going on in other sectors, although a flat close for IT required an index-leading 13.4% jump for Appen ((APX)) following a guidance upgrade.

The counter to Appen was Smartgroup Corp ((SIQ)), an industrial, which fell -13.6% on its trading update and announced the retirement of its CEO.

Outside of the index, train crash of the day was online lender Prospa Group ((PGL)), which disclosed it would fall short of prospectus expectations and fell -27.5%.

At midday it looked like all the gains of Friday would be wiped out, before the cavalry arrived. On Friday it was all about optimism, after Larry Kudlow suggested a trade deal was close.

A trade deal is always close. It’s like an asymptote – every day it gets closer, but actually never gets there. As to why this was “new news” is unclear, but we liked it on Friday. Rethink yesterday? Or is the Hong Kong issue starting to bite into sentiment?

And then last night, things turned sour again on the trade front. Although Wall Street is ever optimistic, and our futures are only down -2 points this morning, for what it’s worth.

The Dow futures were pointing to a positive opening last night after a Chinese state news outlet quoted the Chinese premier and chief negotiator as saying his recent conversations with US counterparts had been “constructive”. This is another oft-used word, which to me sounds like a nice way of saying we haven’t actually achieved anything yet.

No doubt computers are programmed to respond blindly to such words, but do they understand “pessimism”? That was the news out of CNBC China last night.

All was looking rosy on the trade front a couple of weeks ago when it appeared both sides had agreed, in principle, to roll back their tariffs as part of the phase one deal. But then Trump threw cold water on the prospect, saying he had made no such agreement. Hence the Chinese have now become pessimistic about a deal being done this year.

In short, China wants to see tariff roll-backs before it signs a deal. The US wants a deal signed before it will roll back tariffs. Stalemate.

Beijing believes it has time on its side, as it follows the progress of Trump’s impeachment proceedings. As to what difference this will make is unclear – it is assumed Trump will be impeached by the Democrat-led House but it is also assumed he will not be convicted by the Republican-led Senate, and it is also assumed impeachment will only serve to galvanise Trump’s voting base rather than engender doubt.

Yesterday the PBoC announced a cut to its repo rate for the first time since 2015. It is these sorts of fresh stimulus measures that have China believing it can hold on for a deal that suits, despite being keen to do a deal.

But if Beijing is prepared to hold off, the December tariffs will kick in. Is Wall Street worried? Clearly not. Right now good news results in a rally and bad news results in no rally. All three indices again hit new all-time highs last night, albeit just.

Gold continues to crawl its way back as a trade deal fails to eventuate.

The SPI Overnight closed down -2 points

The RBA governor will speak today for the first time since last week’s weak jobs numbers. 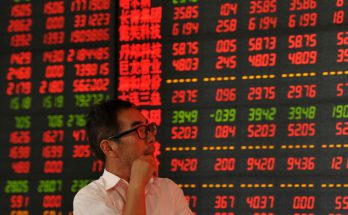