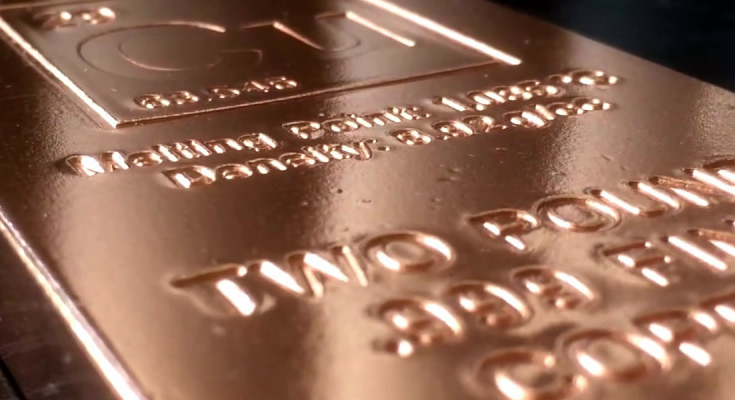 Copper is presently engaged in a tug-of-war between negative near-term factors and positive longer-term considerations.

Copper is facing near-term economic/trade-related concerns on the one hand, which have negatively impacted metal pricing and demand; whilst on the other hand the outlook is positive based on the prospect that copper mine supply will fail to keep up with burgeoning electric vehicle (EV) demand, along with other applications.

These near-term negative issues have adversely impacted the share prices of copper producers and aspiring producers alike, making it harder for them to gain market traction and generate the funding that will help bring to new copper supply to market.

While the global manufacturing sector has experienced significant headwinds so far in 2019, a revival of optimism in copper end-users could fuel a wider improvement over the coming months and into 2020. Countermeasures to US trade tariffs have contributed to a rebound in Asian manufacturing, suggesting that although demand pressures remain weak, there is the prospect of some relief to the current slowdown.

The IHS Markit Global Copper Users PMI is a composite indicator that provides an overview of operating conditions at specific manufacturers identified as heavy users of copper. It is based on data provided by companies around the globe. As many copper users are producers of primary manufacturing goods, the index that measures output levels can also provide an indication of the direction of global manufacturing output.

The Global Copper Users PMI rose above 50.0 during September, indicating the first improvement in business conditions since November 2018. Key to the upturn was a moderate expansion in output, the fastest for a year, as firms looked to build stocks of manufactured goods in hopes of stronger future demand levels.

On a regional basis, Asian copper users have seen the greatest change in the output trend this year. Production during the second half of 2018 was mired by the introduction of US tariffs on Chinese goods, causing a downturn in new orders and subsequent output cutbacks across the region. China responded with fiscal stimulus measures to ease tax burdens on manufacturers, which helped soften the decline and, more recently, lift production levels. 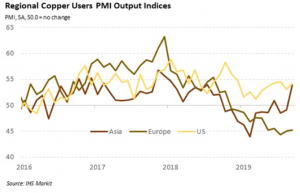 As Asia accounts for a large proportion of the global copper-using industry, this has had a notable impact on global output levels – and could signal a boost for the world manufacturing sector. 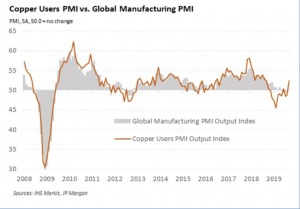 Historically, the Global Copper Users PMI Output Index has correlated strongly with the Global Manufacturing PMI Output Index, so the latest upturn in copper usage offers some optimism that this could transform into higher output in other industrial sectors. That said, caution is require, as Asian copper PMI data have shown greater volatility in recent times, particularly as Asian operating conditions have diverged from those seen in European and US markets. 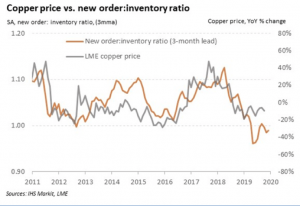 Despite the overall improvement amongst copper users, the impact on prices is likely to remain subdued. The increase in new orders from Asian manufacturing users during September was only marginal, while demand across the global copper-using industry declined as a result of weak conditions in European markets. Stronger output growth has therefore left manufacturers over-stocked, signalling that input buying may weaken during the fourth quarter unless demand levels improve. The new order-to-inventory ratio (derived from the Copper Users PMI data) suggests a downwards impact on prices, with the year-on-year change remaining negative.

In addition, copper remains in good supply, despite reports of a 2% fall in global mining production in 2019. Weak manufacturing demand has meant that shortages are low, indicating that there is unlikely to be a supply-side squeeze in the near term.

There are some positive factors that may help support copper prices. For instance, China has announced additional stimulus measures for its domestic economy, which may boost manufacturing demand during the fourth quarter. Also, there have been further trade talks between the US and China, although sentiment toward these discussions has been mixed. The trade war remains the number one issue affecting the global industrial sector, so any progress could lead to upward pressure on copper prices.

Either way, the underlying PMI picture has become more positive, suggesting a possible rebound in the Asian copper-using industry, albeit one that is likely to leave prices subdued for now. Upcoming data releases will confirm whether higher output levels can be maintained or whether demand stagnates again. 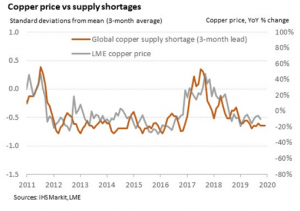 There is a strong feeling that growth in electric vehicle production is going to push copper demand well beyond production over the coming years. Matt Badiali at Banyan Hill Research recently stated in Barrons that the world will need to produce 5 million metric tons of copper per month by 2030 – about 2.5 times more than it will produce this year – in order to meet projected demand from the electric-vehicle industry. 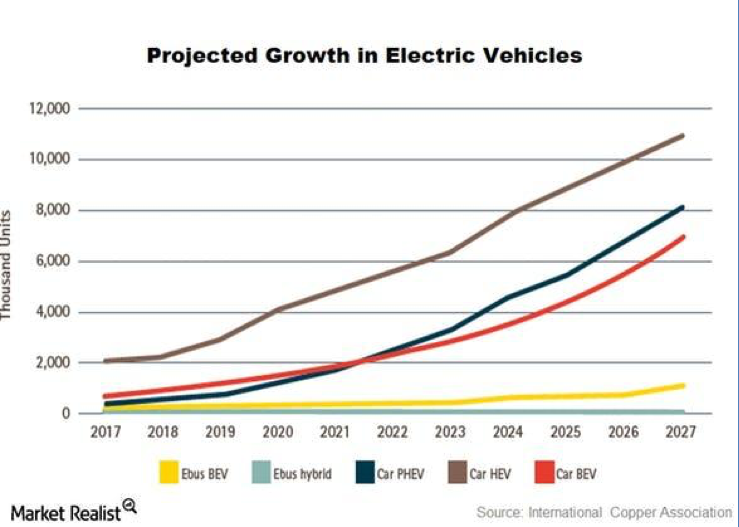 The production trend for electric vehicles has certainly been upward and cannot be ignored. However, the question is how much growth will occur? There have been many stops, starts and sputters in the vehicle industry over the years. Petrol prices are also a big variable going forward. The U.S. is pumping out enough oil to probably put a cap on major price increases for the foreseeable future.

However, having a more environmentally-friendly vehicle has also been a driving force for many electric vehicle consumers. Will that continue or will it dissipate over time? Or, will alternatives like liquid natural gas, fuel cells or biodiesel become the alternative that the vehicle industry gravitates toward in the next 10 years?

The investment bank, Jeffries, is forecasting a 1 million metric ton deficit in 2024 without copper miners expanding their production capabilities. Goldman Sachs has a similar projection. The deficit could grow to 4 million metric tons by 2028. This of course could lead to a tight supply situation, as annual world copper production is about 18 million metric tons. It would seem that miners would be able to expand production to fill in this supply gap, but that might not be likely.

Higher prices tend to lead to more production and lower prices tend to cause producers to produce less. This is a generalization, but it is the typical cycle that happens time and again in commodities. There are significant capital costs to open new mines and even to ramp up production at current mines. CEOs and CFOs of mining companies like Freeport-McMoRan and Rio Tinto typically don’t like to invest heavily in expansion during periods of falling prices, which has been the case in recent years.

It remains to be seen how much production will increase in the coming years, as it could be considered fairly risky by copper producers to do so in the current environment. It could be very interesting if prices continue to decline and producers curtail production or at least don’t expand production. The supply gap could be even greater if the forecasted demand materializes.

In the copper market at present, speculators are very much focused on the here and the now. Fears over trade, economic growth and political instability, have taken centre stage for the time being. These concerns have led to pessimism and lower levels of investor interest generally in the copper sector. However as we know, things can change very quickly. Investor sentiment can change rapidly, particularly if a trade deal between the US and China can be reached.

From a bigger picture perspective, the outlook for copper remains positive. There are big question marks over the supply-side’s capacity to meet burgeoning demand. Of course, higher prices will ultimately flush out new sources of supply, but at the present time flat prices are hampering the development of new supply. Current circumstances have the potential to delay the onset of new copper mines, thus making the supply gap even worse.

For savvy investors, now is likely an appropriate time to be evaluating copper equities.