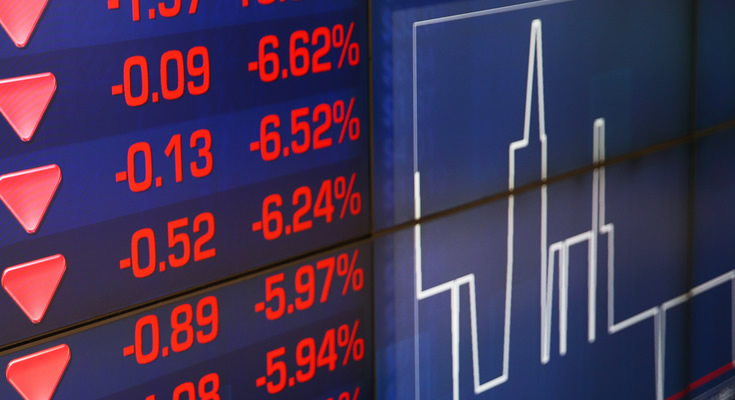 But while the market went nowhere, the Aussie dollar ended October with a rush – up over 69 US cents to end around 69.12 US cents for a 2 cent gain overall.

The currency gained from the Fed’s pause move on Wednesday and a realisation that another rate cut in Australia probably won’t happen until early 2020.

The local market looks like starting November with a fall of around 28 points according to overnight trading in ASX 200 futures.

Global iron ore prices – the most important commodity for Australia – fell 7% to $US85.97 a tonne on October 31 for 62% Fe fines delivered to northern China, according to the Metal Bulletin’s Fastmarkets index. The closes at September 30 was $US93.38 a tonne.

Wall Street ended October in the red but made gains for the month.

Major indexes logged monthly gains, with the S&P 500 posting a 2% October rise, the Dow up half a percent and the Nasdaq Composite jumping 3.7%.

European shares did well in October – the Stoxx 600 index fell 0.49% on the last day of the month but still rose more than 5.1% over the month with gains in Germany (over 7%) and France (over 5%) and London (2.4%, despite the distractions of Brexit).

In Asia, the Hong Kong market rose 3% despite the almost nightly protests which helped the region slip into a recession with growth in August and September falling.

The Nikkei jumped more than 7% in Tokyo while the Shanghai market in China rose more than 5% despite the weakest economic growth in the September quarter for 27 years.

Oil prices had mixed months – the West Texas Intermediate crude for December contract fell 88 cents, or 1.6%, to settle at $US54.18 a barrel in New York on October 31, but still eked out a tiny gain of 0.2%.

Lunch Report: Aussie Market Back In The Red