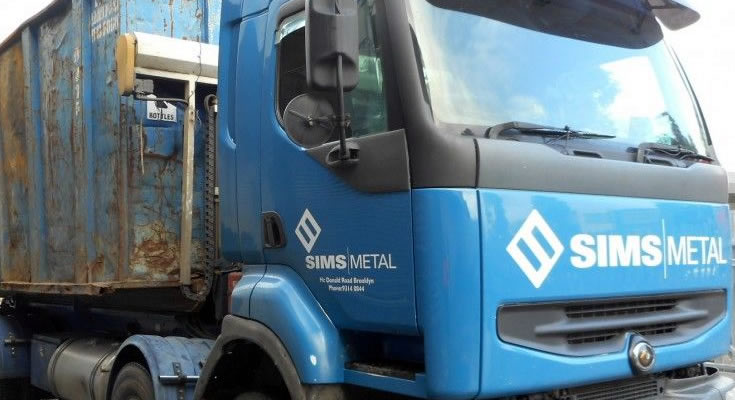 Didn’t see this one coming.

Metals recycler Sims Metal Management saw its shares savaged yesterday after it shocked with a trading update containing a 90% collapse in estimated profit for the 2019-20 financial year.

That financial year is just on four months old and yet the company reckons its previous guidance has been blown up to the end where it will incur a first-half loss (for the six months to December) and then a second-half rebound to produce a modest profit.

The downgrade said the company’s first half loss would be between $20 million to $30 million, thanks to the collapse in the price of scrap metal around the world.

The second half is forecast to see an underlying EBIT of $50 million to $70 million.

The company forecasts a full year underlying EBIT (earnings before interest and tax) profit of $20 million to $50 million for 2019-20.

It also means the company is very likely to report an after tax loss.
Sims said first half trading conditions were “materially worse” than the first half of last year.

Chief executive Alistair Field said the company had unsold inventory leading into September, which was obtained at purchase prices that reflected the stronger market conditions prevalent in the June-August period.

“This inventory will be sold at a loss and will impact our results through to December,” he said.

Mr Field explained in Monday’s statement;“Firstly, the collapse in the sell price for ferrous scrap, and the resulting market illiquidity, made it impractical to drop the buy price at the same rate and remain competitive. This exacerbated the already compressed margins, and will continue to negatively impact results through to December, as low margin and no margin cargoes are delivered.

“Secondly, we had unsold inventory leading into September, most significantly in the UK, at purchase prices reflective of the June through August markets. This inventory will be sold at a loss and will impact our results through to December.

“Thirdly, we stated in our September trading update that the buy price had fallen ‘potentially below the level at which it is economic for a number of our suppliers to gather and sell scrap. Alternatively, some suppliers may choose to sit on inventory until the price recovers’. This is now the case for both ferrous and zorba-related products.

“As a result we have had to either reduce margins to stimulate supply and/or maintain margins but reduce volumes. Margins and volumes are meaningfully lower across all metals recycling operating regions and this will continue to impact our results for as long as prices remain at these subdued levels.

Mr Field added that “the fundamental and interrelated causes of the crash remain the same as those we discussed in September. Automobile sales are down, global manufacturing is down, China’s growth and world growth are slowing, and unresolved trade wars remain.”

“This is expected to be resolved in the second half of our financial year when the Chinese authorities have indicated that high quality zorba-related products will be reclassified as ‘new metal’ rather than waste. In the meantime, zorba-related products that were going to China are being sold to other markets at reduced prices,” The CEO said yesterday.

Commenting on the implications for the full year results, Mr Field said that “the first two issues I referred to should wash through Underlying EBIT by the end of December. The ongoing low prices for ferrous and non-ferrous products will continue to impact results for as long as the prices remain at these levels.

“Our strong balance sheet will allow us to navigate this period of market volatility. This, coupled with our disciplined approach to capital expenditure and cost management, will put us in a strong strategic position when the market normalises,” Mr Field promised.