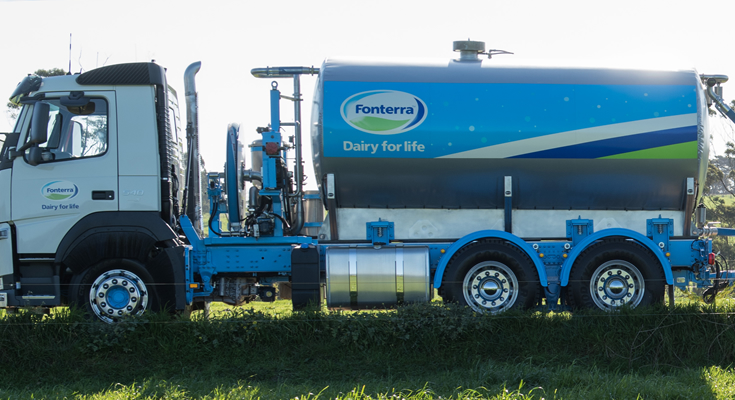 As expected NZ dairy giant, Fonterra posted a whacking great loss for its 2018-19 financial year – in fact, it was a record loss of $NZ605 million for the 12 months to the end of July.

And while it also revealed a new structure and strategy, it is now facing a lengthy investigation into its accounts from 2015 to 2018 by NZ’s Financial Markets Authority.

For the shareholders in the listed trust – most of whom are NZ dairy milk suppliers – there no dividends, as forecast, but a quicker than expected return to payouts (and a lower ratio of profit) is suggested in the company’s comments and those of its senior managers yesterday.

The new strategy is a radical change – from a global giant, it is retreating back home to focus on NZ milk (and presumably that in Australia where it is a major player). The company plans to chop debt again this year and will phase out overseas “milk pools” and focus on its local production.

That means Fonterra is giving up being a global champion’ to be more of a Kiwi national champion – which would fit more the demands from many of its shareholders and critics who have complained Fonterra has taken on too much debt for too little return and moved beyond its NZ roots.

The net loss of $NZ605 million for the July year came after the already announced asset write-downs of $NZ826 million, mainly on its offshore businesses.

This follows the previous year’s loss of $NZ196 million and a billion dollars worth of asset sales (the latest was the sale of a half interest in a pharmaceutical business on Wednesday).

Yesterday’s results came later than expected after the company was forced to delay the release of its annual accounts while auditor PwC worked through significant accounting adjustments related to the write-downs.

Sales revenue was down 2% at $NZ20.1 billion. Normalised earnings before interest and tax fell 9% to $NZ819 million.

In a comment on the results, CEO Mike Hurrell said Fonterra’s normalised earnings per share for the year was 17 cents, which was above the last forecast for the year of 10-15 cents.

“The gross margin from our largest business, New Zealand Ingredients, was $NZ1,332 million, up 3 percent on last year due to increased sales and price performance.

“Our Foodservice performance also improved on last year, with gross margin up 10 percent. This was despite lower total sales volumes, following a slow start to butter sales in Greater China and Asia.

“But we can’t ignore that we had a number of challenges across the year – these included Australia Ingredients, our businesses in Latin America and the consumer businesses in Sri Lanka, Hong Kong, and New Zealand.”

It would move from two large central businesses, ingredients and consumer and foodservice, to three in-market sales and marketing units that would be close to customers.

Fonterra has dropped ambitions to be a global dairy giant sourcing milk from around the world in a new business strategy which dictates “less is more”.

“This is the right strategy for us, but it requires us to make some hard choices. We’ve looked at the big opportunities and risks for a New Zealand dairy co-op today. We’ve also got clear on what our strengths are and the hard realities we have to face up to. I’m pleased that we now have a strategy that is built from the belief that our farmers’ milk here in New Zealand is the best and most precious in the world.

“Recognising this, while we will complement our farmer-owners’ milk with milk components sourced offshore when required, we will start rationalising our off-shore milk pools over time.”

“This focus on dairy ingredients and foodservice will see us playing to our strengths and driving more value from the parts of our business that consistently perform.

“We will still be in Consumer and will focus on markets throughout the Asia Pacific. The majority of the products we sell in these markets are made from New Zealand milk and are similar to those we sell in our Ingredients business. This creates efficiencies and helps us play to our strengths. It also means we will reduce our consumer product portfolio to those that create superior value,” Hurrell said.

Fonterra had set itself a target of reducing debt by $NZ800 million in the 2018-19 financial year. It fell short of the target, with a cut of just $NZ469 million.

But Wednesday’s sale of the 50% stake in DFE Pharma for $NZ633 million will see the net proceeds used to cut debt this year so the $NZ1 billion target can be met this financial year.