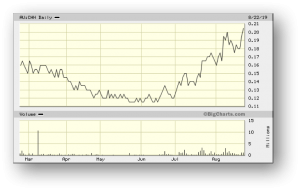 We introduced CHN to our coverage universe during March 2019, based on its dominant acreage position within the Bendigo Zone in Victoria. It is a domain that has historically produced >60Moz of high-grade gold. The region is now capturing global attention once again, largely thanks to Kirkland Lake Gold’s Fosterville turnaround story. Historically, all high-grade gold discoveries within the region have come from outcropping areas such as Bendigo (~22Moz @ 15g/t Au), Ballarat (~14Moz @ 12g/t Au) and Castlemaine (~6Moz @ 13g/t Au). CHN’s 100%-owned Pyramid Hill Gold Project is a district-scale holding that covers 4,500 sq km in Victoria’s Central Goldfields region and encompasses three key districts within the North Bendigo and North Stawell Zones. CHN also maintains the King Leopold nickel project, which covers ~1,800 sq km in the west Kimberley region of Western Australia, where drilling will soon begin.

A MLEM survey was completed over E04/1169, where CHN owns 100% of the hard-rock mineral rights. The program followed up on four priority targets identified from the previous “Xcite” Airborne EM survey in 2018, with the objective of defining drill-ready, discrete, late-time EM conductors. 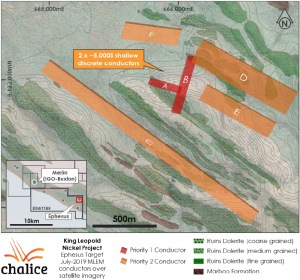 Conductors A and B have a strong conductance of ~4,800 and ~5,000 Siemens respectively, and are modelled at a shallow depth within an extensive suite of Ruins Dolerite. The interpreted source of the conductors is massive sulphides.

Conductors C to F are modelled with low to moderate conductance (<3,000 Siemens) and based on field reconnaissance, are likely sourced from pyritic and/or graphitic units. They are therefore considered to be lower priority for follow-up drill testing. 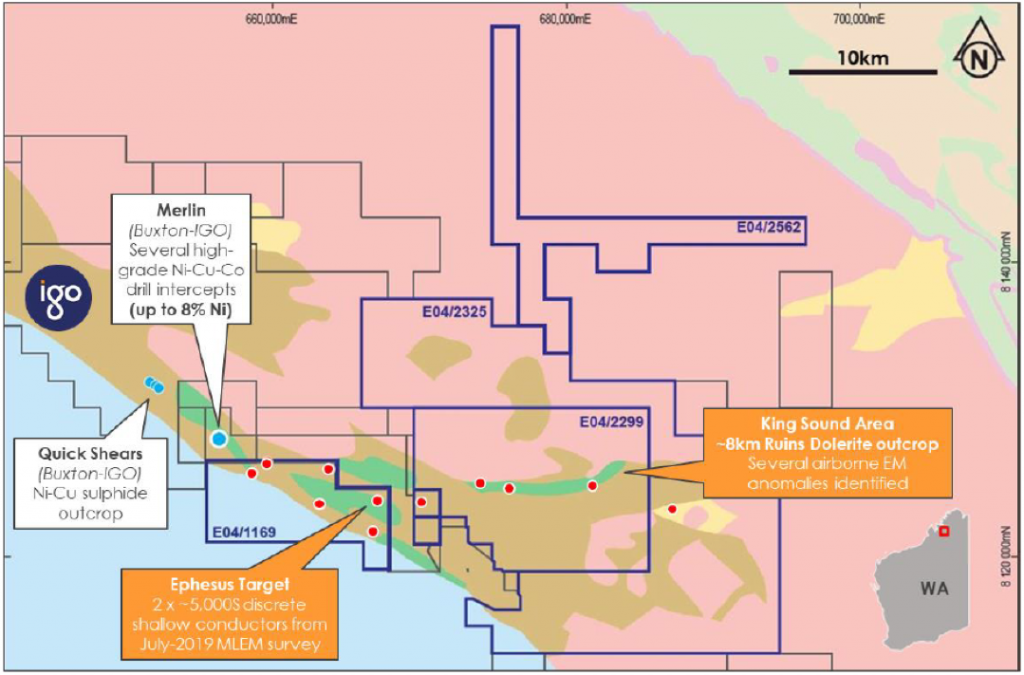 A SkyTEM airborne EM survey was recently completed over E04/2299 and E04/2325, where CHN is earning an 85% JV interest. This survey is the first geophysical program to be completed over this area, which includes an ~8km outcropping strike length of prospective Ruins Dolerite.

A total of 1,394 line kilometres were flown at 150m line spacing, which generated clear and high-quality EM anomalies in a highly resistive environment. Several discrete and strong mid-to-late time EM anomalies were identified, coincident with the outcropping ridge of Ruins Dolerite, which require immediate field checking.

CHN is encouraged by this first phase of MLEM, with two highly-prospective drill targets already identified in a similar geological setting to that of the nearby Merlin Prospect, owned by Buxton Resources (ASX: BUX) and Independence Group (ASX: IGO). Buxton’s Merlin Prospect has had several phases of EM and drilling, with drill intercept grades up to 8% Ni reported.

A heritage survey is planned in late August on the southern areas of E04/1169 as well within key areas of interest on E04/2299 and 2325. Field reconnaissance and further ground EM will then commence in early September at the King Sound Area, as well as at two additional targets on E04/1169. All conductors will be field checked in the coming weeks in order to locate any surface expressions of the conductive sources.

RC drilling at the Ephesus Target and potentially additional King Sound ground EM targets is expected to commence in mid-late September. The program may be expanded subject to the results of the next phase of reconnaissance and geophysics.