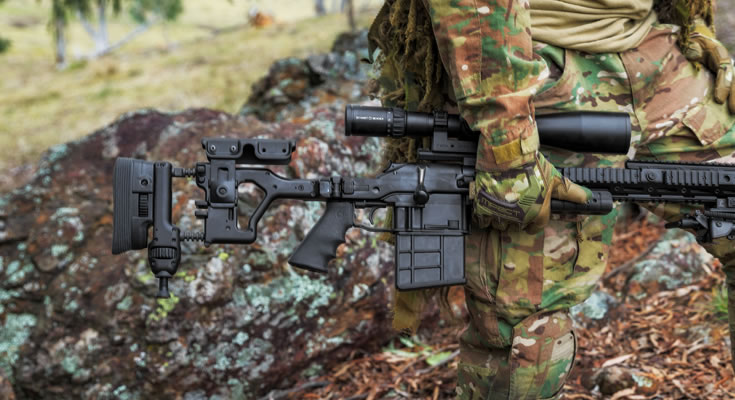 A paradox of the Pentagon is that it can start a war in about five minutes, but when it comes to selecting contractors to supply the materiel the process drags out for years. But some ASX stocks are achieving success in their assault on the military establishment.

As with other military bodies, the Washington decision-makers want only the best for their men and women in the field and will undertake exhaustive testing and evaluation.

The less generous interpretation is the process is more bureaucratic than anything Westminster could manage.

For Australian providers, there’s an additional obstacle in that the so-called Berry Amendment, which requires the US Department of Defense to procure home-grown goods whenever possible.

Because of this, foreign providers need a solid on the ground presence or a local partner to open doors.

One successful exemplar is Austal (ASB, $3.90) the world’s biggest aluminium ship builder that has bounded to close to record share price highs on upbeat earnings guidance.

With two US shipyards, Austal makes vessels for the US Navy’s Littoral Combat Ship and Expeditionary Fast Transport programs.

The Canberra-domiciled Xtek (XTE, 56c) has been trying to crack a US defence contract for its super strength armour plates and helmets capable of stopping a whizzing bullet from an AK-47.

In an initial foray, the Marines bought $800,000 of helmets – moulded with high-pressure oil – for a look-see.

“The US military has been testing our military for some time but we couldn’t get into it without a partner,” says Xtek CEO Philippe Odouard. “We looked at opening factories and other solutions there, but they were all expensive.”

Not to waste the occasion, Xtek raised $3.5m in a share placement and share purchase plan, at 45c a share. With the stock up 11c or 56c over the past week on no apparent news, subscribers are well ahead.

Odouard says the merger is a snug one because Highcom provides the factory and the network to distribute Xtek’s premium products, which won’t cannibalise Highcom’s standard offerings.

Xtek and Highcom are targeting not just the military, but the country’s police forces that deploy 800,000 cops. The special operations are of particular interest, because these agents wear vests and helmets all day and require lighter protection.

Locally, Xtek is heartened by Canberra’s decision to splurge $3 billion over the next two decades on high-tech equipment for the special forces, including small unmanned aerial systems (drones), weapons and communications systems.

“We have been following this program for a while and it plays into our state of the art high-performance product line for the soldier,” Odouard says.

“We believe it will be positive in helping our growth. It is great news that the government has reemphasised the priority of such a program.”

Xtek already has a $100m order from the Department of Defence to supply and maintain a drone fleet.

But Xtek’s true potential lies in opening the market for its ballistics gear and that means getting past the local military gatekeepers.

Xtek recently guided to 2018-19 revenue of $30-35m, mainly derived from the drones business. Highcom bodes well for future group profits, having generated ebitda of $1.4m in calendar 2018, on revenue of $10.5m.

Separately, Xtek has signed a “joint statement of strategic intent” with the Australian Space Agency, by which the agency leverages Xtek’s composite materials know-how.

Xtek intends to build design and testing capabilities – including new space craft and launcher systems. But the announcement doesn’t mention any specific contracts or revenue – the stuff that gets investors truly excited.

Alexium’s advantage is that its foundation fire-retardant technology originally was sourced from within the US Department of Defense, which means the company doesn’t have to explain the basics to a war room of generals.

Still, the company’s progress has been glacial, leading to the familiar syndrome of overhyping prospects and disappointing long-term investors.

Inevitably, Alexium shares have suffered and they’re now a far cry from their 96c peak in October 2015.

Behind the scenes things are happening after a management revamp that saw the departure of CEO Dirk Van Hyning and executive chairman Gavin Rezos.

The rev-up was instigated by the bottom picking firm and 5 per cent Alexium holder Wentworth Williamson Management, a Sydney based value fund manager set up by former Investec executives in 2013.

The company’s coatings, branded Alexiflam, are free of environmentally unfriendly bromides, which most other fire retardants contain.

Alexium’s entrée to the military is via a partnership with Pine Belt, an existing uniform supplier which has undertaken extensive testing. CEO Bob Brookins says the top brass are happy with what they see, with a procurement decision likely “some time after” the current financial year.

Brookins says some investors mistakenly believe that Alexium will supply the treated uniforms across the whole military – 2.2 million personnel in all – from day one. “In reality it’s about attacking certain key segments and as we achieve success we can grow into other areas.”

Alexiflam also has applications in packaging electronics and building materials – the latter being of special interest given the global problems with combustible cladding.

Alexium has another product called Alexicool, which is used in mattresses, toppers and pillows to make these bedtime requisites feel cooler and allow for a better sleep.

Alexium has got in to bed with two of the biggest US mattress suppliers and this month entered a two-year supply deal with pillow maker Pegasus Home Fashions.

The best way to think of Alexium is that the Alexicool will provide the short term revenue and cash flow, but Alexiflam will imbue the longer-term valuation spark if the military brass gets on board.

The pillows and mattresses helped the company improve receipts in the (fourth) June quarter to $US2.1m ($3m), 78 per cent higher, with cash outflows narrowed to $US497,000.

Management expects to post an underlying profit by the December quarter. The company’s other key priority is to renegotiate an expensive $US10.8m loan facility that matures in September next year.

While the contracts are set in stone, profits have proved elusive for Quickstep which has had a number of strategy pivots, including a focus on – and then away from – the automotive sector.

Quickstep reported June quarter revenue of $23m, up 38 per cent and full-year turnover of $73m.

Based at Bankstown Airport, the company managed a $600,000 cash surplus for the quarter and expected to post an unquantified net profit in the 2018-19 year.

Quickstep isn’t doing anything egregiously wrong; it’s just that the aircraft contracts have been running for some time and there’s not enough sizzle to excite investors.