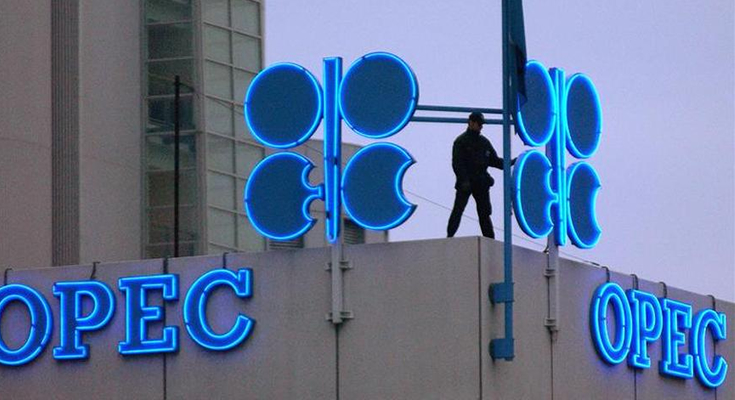 Oil futures finished higher Friday and for the week, despite another forecast from OPEC about weakening demand this year and next.

West Texas Intermediate crude for September delivery rose 40 cents, or 0.7%, to settle at $US54.87 a barrel after trading as high as $US55.67 during the session on the New York Mercantile Exchange.

Front-month WTI futures scored a 0.7% weekly rise, while Brent edged up by 0.2% from the week-ago finish, according to Dow Jones Market Data

Oil services group, Baker Hughes on Friday reported a rise in the number of active oil rigs in the US for the first time in 7 weeks, up 6 at 770.

Crude oil futures dipped into a bear market earlier this month, pulling back more than 20% from recent highs.

WTI crude has slid 6.5% so far this month while Brent is down nearly 10% on the month.

Earlier on Friday OPEC released another downbeat oil market outlook for the rest of this year thanks to slowing economic growth, the impact of the trade war between Donald Trump and China and growing fears about the message falling bond yields are sending about economic demand and activity next year.

In its latest monthly report, OPEC cut its forecast for global oil demand growth in 2019 by 40,000 barrels per day (BPD) to 1.10 million BPD and indicated the market could be in slight surplus in 2020.

Analysts told Reuters that it is rare for OPEC to give a bearish forward view on the market outlook and oil retreated and fell below $59 a barrel.

Despite the June extension of the OPEC-led 1.2 million barrels a day output cut, oil has tumbled from April’s 2019 peak above $75 pressured by trade concerns and an economic slowdown.

OPEC cut output in July, according to the report showed. According to figures, the OPEC figures output from all 14 members fell by 246,000 BPD from June to 29.61 million BPD as Saudi Arabia cut supply further.

The demand for OPEC crude will average 29.41 million BPD next year, OPEC said, down 1.3 million BPD from this year. Still, the 2020 forecast was raised 140,000 BPD from last month’s forecast.

Reuters pointed out that the OPEC report suggests there will be a 2020 supply surplus of 200,000 BPD if OPEC keeps pumping at July’s rate and other things remain equal. Last month’s report had implied a larger surplus of over 500,000 BPD.