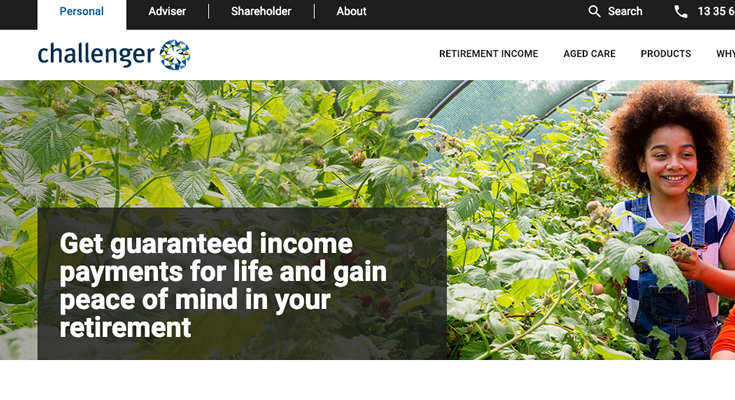 Investors in Challenger Ltd slowly cooled to the company’s 2018-19 result yesterday which while meeting revised guidance in June (the second downgrade in five months) saw no change in what looks like a slow outlook.

The shares surged to a day’s high of $7.23 – up more than 10% – shortly after the opening as investors realised there were no unexploded bombs in the results unlike the February interim and the first of two downgrades, that was further cut in a June update.

The shares then turned down to finish the day up just 2.4% at $6.66 and looking a touch peaky, so further softness in coming days wouldn’t surprise.

Challenger has confirmed its met its June second-half earnings guidance with profit before tax coming in at $548 million. The guidance was for earnings to be between $500 million and $548 million.

The listed retirement products provider said a “lower-for-longer” interest-rate environment crimped investment earnings and performance fees – a repeat of commentary at the interim and in the June update, with confirmation of more of the same for the coming year with bond yields here and offshore at record lows.

Statutory net profit after tax for the year to June fell 4.6% to $308 million.

The company will pay a steady fully franked full-year dividend of 35.5 cents a share, with a final of 118 cents a share It forecast the dividend would be maintained in fiscal 2020.

Challenger reiterated its lowered guidance for 2020 – announced in June – with profit expected to come in at between $500 million to $550 million because of lower capital growth on equities, distribution, product and marketing initiatives and lower interest rates on shareholder capital.

The company also confirmed its revised pre-tax return on equity (ROI) target of 14%, plus the cash interest rate, on the back of the diminishing rate environment.

And that’s where the rethinking of the result starts for many investors. According to 2019-20 will be a year of no gain. is that a signal for the rest of the market?

Chief executive Richard Howes said in yesterday’s statement the results demonstrated Challenger’s strength in a time of disruption in the sector.

Looking ahead, Mr. Howes said Challenger is well placed to capture opportunities for growth in both its Life and Funds Management businesses, with superannuation industry assets expected to double over the next 10 years.

“We’re responding to the current environment with a range of initiatives to address the adviser disruption we face, and we continue to implement our strategy for long-term growth,” he said.

But no confidence that profits will rise over the next year.