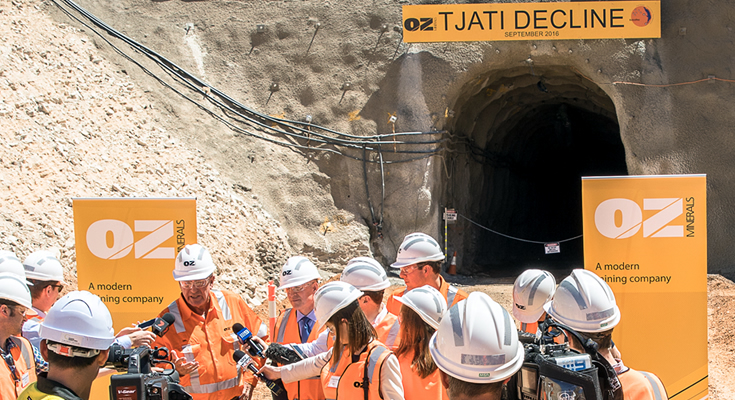 OZ Minerals is moving closer to meeting its deadline for first output from the billion-dollar-plus Carrapateena copper-gold mine in South Australia by the end of this year.

The copper-gold project is expected to start production in the fourth quarter, with over 46,000 tonnes of development ore already stockpiled, according to yesterday’s June quarter report from the company.

OZ Minerals revealed it had spent $177 million on Carrapateena in the first half of 2019.

Decline development at Carrapateena has reached over 15,000 metres at a vertical depth of 630 metres in the June quarter, with the primary ventilation circuit to first production level now in place.

The company reported that the minerals processing plant and non-process infrastructure construction and procurement were approximately 80% complete above ground, while the tailings storage facility is more than 90% complete.

On top of this, the company is also nearing completion of its Prominent Hill gold ore processing trial, with its preliminary analysis demonstrating an improvement in recoveries and throughput rates in line with expectations.

“Looking ahead, our main focus is on continuing to deliver to plan at Prominent Hill and advancing safely towards construction completion at the Carrapateena project,” he said in yesterday’s report.

Cole also said a progress report for the pre-feasibility study of the company’s West Musgrave operations in Western Australia is expected in the third quarter this year. The company said a 10 million tonnes a year open pit mining operation had been identified as optimal but gave no other details.

With the spend on Carapateena of $177 million, OZ said its cash balance has been cut to $187 million at June 30. It will go lower with further spending on growth projects such as Carapateena and on West Musgrave and Prominent Hill in the current half-year.