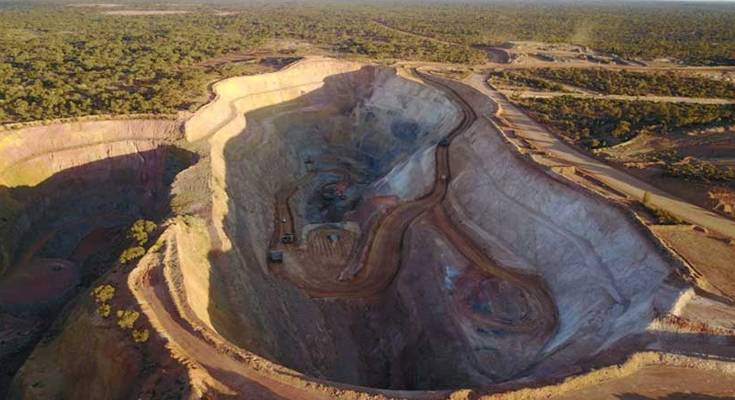 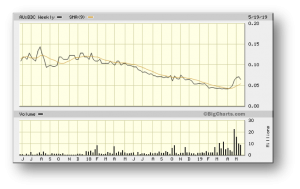 Purchase of contiguous tenement package in and around the 2.6Moz Bardoc Gold Project in WA, further strengthens BDC’s pipeline of exploration and discovery opportunities.

BDC has been part of our coverage universe since mid-2017, with the company undergoing a major corporate rejuvenation following the appointment of former key Pilbara Minerals’ (ASX: PLS) executives, Neil Biddle and John Young. BDC has since been at the forefront of consolidation within the WA junior gold sector, implementing separate mergers with formerly-listed Aphrodite Gold and Excelsior Gold, with the aim of becoming a recognised mid-tier Australian gold producer in the Eastern Goldfields region. The company now has the combined asset base, team, corporate backing and shareholder support to fast-track the development of its Bardoc Gold Project into production and cash-flow at a time when both US$ and A$ gold prices are demonstrating resilience. Current activity is focused on upgrading the current 2.6M oz gold resource base, both by extending existing deposits and discovering entirely new ones.

BDC has strengthened its project pipeline within Western Australia’s North Kalgoorlie district, following the execution of a tenement sale and purchase agreement with Torian Resources (ASX: TNR) to acquire a strategic package of 40 tenements covering of 49 sq km in and around its 2.6Moz Bardoc Gold Project. 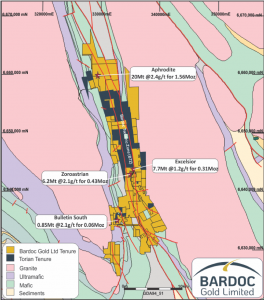 The newly purchased tenements extend over the regionally important Bardoc Tectonic Zone (BTZ). The BTZ is an intensely deformed zone, up to 3km wide, that is recognised as part of the northern extension of the Boulder Lefroy Shear Zone That hosts multiple giant gold deposits (i.e., Kalgoorlie Golden Mile).

While most of the gold discovered and mined to date within the BTZ is from the more mafic material (such as the Zoroastrian and Paddington gold mines), there is also significant mineralisation within the more felsic units such as BDC’s 1.56Moz Aphrodite gold deposit, located just to the north of the newly-purchased TNR ground.

The knowledge that all rock types within the BTZ are capable of hosting gold mineralisation, combined with the structural geological framework established by BDC over the past 18 months in conjunction with the CSIRO, has enabled it to define new high-priority target areas on its tenure.

Significantly, the work announced this year by BDC has confirmed that areas of the company’s gold mineralisation have distinct geochemical signatures that can be defined and ranked by the machine learning which has been successfully applied at the Zoroastrian Deposit. This technique will also be applied to better define the more prospective rock units within the expanded tenement package.

Given the strategic location of the tenements between the Aphrodite (1.56Moz Au) and Excelsior/Zoroastrian (combined 737koz Au) complex and the fact that they contain the right rock types and structural framework, BDC believes they are highly prospective for potential new discoveries.

The newly-acquired tenement package has had very limited historical exploration in terms of drilling and the application of modern geochemical and geophysical exploration techniques.

The acreage acquisition will therefore allow BDC to expand its current +10,000m RC and diamond drilling programs, which are focused on expanding the current Measured, Indicated and Inferred Mineral Resource that comprises 38.6Mt at 2.1g/t for 2.6Moz.

BDC will apply the results of its recent technical breakthrough that has identified dolerite with a specific mineral signature (known as fractionated dolerite) as hosting the high-grade mineralisation at its 428koz Zoroastrian deposit. BDC’s new tenure lies along strike to the north of Zoroastrian. Exploration targeting this fractionated dolerite horizon can now be undertaken to the north, significantly expanding the prospective exploration search space within the Bardoc Project.

SPI’s key attraction has been its rapid growth path as a result of aggressive corporate activity under its revamped board, which includes key industry players Messrs John Young and Neil Biddle. Both were founding directors of Pilbara Minerals, which has proven to be one of our coverage’s major success stories. BDC is now in the process of assembling a major combined Resource base in WA’s Eastern Goldfields region in combination with a centralized processing hub.

There is a contradiction between the company’s share price performance and the significant amount of energy that has been invested in putting together an Eastern Goldfields growth story. BDC has also undertaken a significant $12M capital raising and made significant changes to its board and management team.