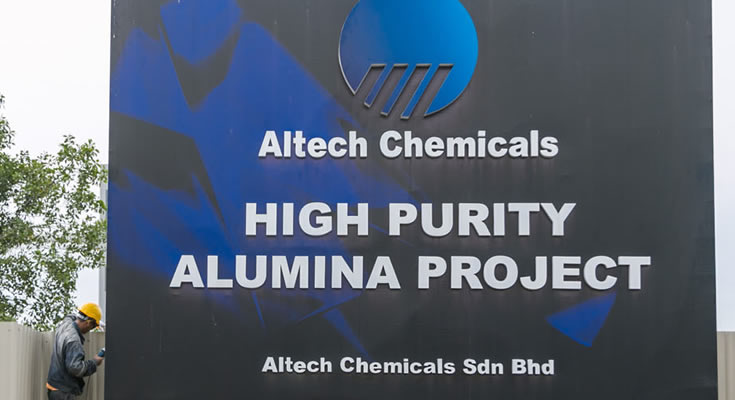 A key to ensuring that all those lithium-ion batteries in Bill Shorten’s electric vehicles don’t overheat and catch fire, high purity alumina (HPA) has emerged as the next battery metals ‘it’ sector.

If HPA were clothing, Anna Wintour would be wearing it.

While the strong demand is apparent – several battery mega facilities have already been built or are being built – the investor jury is out on which of the handful of listed plays have the magic formula to produce the stuff.

HPA has various industrial uses, ranging from ceramics to sapphire glass to light emitting diodes (LEDs). But the focus of would-be producers is on the 99.99 percent purity stuff, also known as 4N, which is most suited to lithium ion batteries. Specifically, the material is an additive to ceramic separators, which lie between the anodes and cathodes in a battery.

Currently, most HPA is synthesized from aluminium metal feedstock, with most of supply coming from Japan’s Sumitomo and South Africa’s Sasol. Miners are also attempting to extract it via acid leaching from kaolin, an aluminium-bearing clay.

While a proven processes, synthesis is expensive because of all the effort and energy involved in turning the bauxite into alumina and then aluminium in the first place.

The kaolin route is less proven, but messy and also high cost. The history of kaolin mining in Australia hasn’t been great, but that’s because producers have targeted the paper market that demands high spec material but doesn’t want to pay accordingly.

Is there a better way?

Alpha HPA is taking the KFC ‘secret herbs and spices’ approach with a solvent extraction technology that means HPA can be derived from widely-used aluminium chemicals.

Alpha has detailed plans for a processing plant at the Port of Newcastle, to be built on ten hectares of yet to be acquired land. The pre-feasibility study envisages a 12,000 tonnes per annum facility at a cost of around $US6400/t, compared with the current market rate of around $US25,000/t.

Known until recently as Collerina Cobalt, Alpha HPA had planned to use Collerina’s eponymous cobalt-nickel project as a feedstock for an HPA plant, given the deposit also contains aluminum.

But having licensed the solvent extraction process from its Brisbane developer, plans for Collerina are on hold.

The former Adelaide Resources is also taking a different slant on the emerging HPA story by focusing on a variant of the feedstock ingredient called halloysite kaolin.

No – we hadn’t heard of that one either.

Halloysite shares the same metallurgy to kaolin, but occurs in tubular form. A rare derivative of kaolin, halloysite is highly desired in high-grade ceramics and the petrochemical industry (as a catalytic cracking agent).

Being an inert substance – it wouldn’t ‘ert a flea – halloysite also has applications as an anti diarrhea medicine and in animal feed.

Halloysite is a small market – around 26,000 tpa, with half the output supplied by a declining New Zealand mine after China closed its facilities for environmental reasons.

While the old Adelaide Resources was gold and copper focused, Andromeda has turned its attention to the Poochera deposit in South Australia, near Streaky Bay and 130 km from Ceduna.

Andromeda’s entrée is by way of farm in deal with the current owner Minotaur Resources, which wants to focus on exploring for copper in the Cloncurry region.

With a 24 million tonne official resource, Poochera is one of the world’s biggest untapped repositories of the material. “We are different to the other ASX companies because the halloysite is valuable in its own right,” says CEO James Marsh.

Given that, Andromeda plans a simple quarrying operation to remove the material and truck it to one of several nearby ports and into the hands of eager Chinese ceramics producers. Four potential offtake partners are currently trialling the material in view of an offtake material for at least 200,000 tonnes a year.

In the longer term, Andromeda intends to become a low-cost producer of top-shelf HPA for lithium-ion batteries. “In the short term, we have something we can sell in the short term and make some nice money out of.”

Under the farm-in terms with In April last year struck a farm-in deal with Minotaur, in which Andromeda invests $3m to earn 51 percent. After a decision to mine, Andromeda can spend $3m more for a 75 percent stake.

Altech is taking the kaolin mining approach to HPA, with an eye on the synthetic sapphire market for unbreakable mobile and laptop screens.

As with diamonds, sapphires can be grown artificially and HPA – and intense heat — is a key input.

HPA’s plans revolve around shipping ore from its Meckering kaolin mine in WA to an $US280m, 4500 tonnes per annum processing plant that’s being built in the Malaysian state of Jahor.

If management is at all fazed by Wesfarmers takeover target Lynas’s woes in Malaysia, it’s not letting on.

Anchored by German investors, the company has just raised $18m in a placement struck at 10.85c a share, a 16.5 percent discount.

A bankable feasibility study costed the entire project at $US298m, with a net present value of $US505m and generating$US76m of ebitda a year for a payback period of 3.7 years.

While Altech looks to the most advanced of the HPA hopefuls, FYI is expected to press the green button on its Cadoux kaolin project 220km northeast of Perth.

FYI has outlined an 8000 tonnes a year operation over a 50 year-plus mine life, producing $128m of ebitda with a net present value of $US506m. The produce would be beneficiated at the mine and then shipped to Kwinana for processing.

FYI says: “with sufficient funding in place and with a number of key permitting milestones already achieved, the bankable feasible study is scheduled to be completed by mid 2019 (with) construction planned to commence in the December quarter of 2019.”

Until recently known as Hill End Gold, Pure Alumina has renounced its gold activities in favour of developing its Yendon kaolin project near Ballarat in Victoria.

The company reports a definitive feasibility study is “progressing well”, with a focus on reducing the costs outlined in the preliminary study. The envisaged size of the plant is also under review, with the company likely to opt for a smaller facility of around 1000 tonnes per annum, but starting ahead of the envisaged 2022 commissioning date.

In the meantime, the Hill End gold assets in central NSW are for sale to the highest bidder.