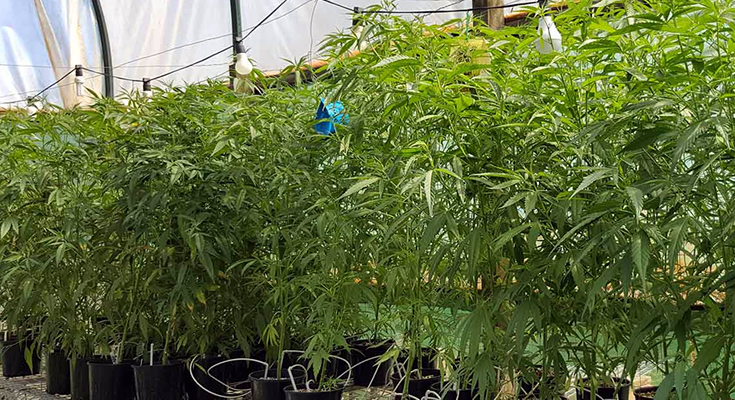 Amid the rush by the ASX listed ‘pot stocks’ to grow medical cannabis, the market has overlooked a key question: where will all the therapeutic hooch be processed?

It’s one thing to cultivate the stuff in view of supplying the medical market which, locally, is in its infancy. But refining the healing herb is not exactly like canning baked beans: specialist facilities are required and unsurprisingly they will be heavily regulated.

For THC Global (THC, 55c), the solution fell into its lap after Danish drug giant LEO Pharma decided a manufacturing facility at Southport on the Gold Coast was surplus to needs.

The facility was used to extracted material from a different plant — euphorbia peplus, or radium weed –to make a cancer drug. But a plant is a plant, which meant the facility was virtually purpose built for cannabis.

“You won’t get another one like this in Australia, no chance,’’ says THC CEO Ken Charteris.

Grown at a separate THC facility in Bundaberg, the cannabis will be fed into 400 kilogram vats, in which the desired cannabinoids and turpenes will be extracted with an ethanol based process.

The only catch is that because THC is yet to receive a manufacturing permit, there’s not an ounce of the stuff in the factory at present. Charteris describes the permit as “forthcoming” and says that as the facility was a drug factory in the first place it should meet all the quality standards.

While THC awaits the paperwork, the federal Office of Drug Control has been swamped with applications from parties wanting to grow and research medical cannabis, or import the material (the law was changed last year to allow this).

But many of the happy holders have discovered they’re no Willy Wonka ticket to prosperity. That’s because obtaining a licence is much easier than obtaining the specific permit to grow and handle the dope at a specific facility.

Without a permitted site to send the harvested plants, the growers are legally obliged to destroy the crop.

“They all have aspirations of building an extraction plant and making little Aussie bottles of cannabis … but it’s far more sophisticated than that,” Charteris says.

“There’s a big myth that if you are a (licensed) cannabis farmer you are worth a stack of money. But you have to build up expensive infrastructure and a lot of these holders are small companies.”

The gist, of course is that with a generous capacity of 12,000 kg of cannabinoid material a year, the unique Southport factory could become the contract refiner for other people’s ganga.

“We are all friends,” Charteris says, implying that talks about offtake deals have already taken place.

The dearth of refining capacity aside, the sector faces the dilemma of reconciling the boundless potential of the local medical cannabis with the current reality.

At present, there are few approved cannabis drugs and experimental versions are only available to patients under the Therapeutic Goods Administration’s special access scheme (doctor awareness is also low).

Initially known as The Hydroponics Company, THC listed in May 2017 focused on providing the growing paraphernalia rather cultivating the weed itself.

But after a board coup in March last year, the company ‘did a 180’ and adopted its current farm-to-pharma strategy of both growing and refining medical dope.

As with most of the pot stocks THC has a Canadian link via its subsidiary Vertical Canna, which has a cultivation project in Nova Scotia. Canada legalised medical dope way back in 2001 and then allowed recreational usage last year – a reform that has created a pot shortage in the country.

Charteris expects THC initially will export most of its product from the facility, on the proviso Australian needs are met first.

“This is a large scale production pharma plant that now is really the next generation,” he says. “We are probably five years ahead of anyone else.”

That may be so. But according to Althea chief Josh Fegan, there are “quite a few” labs in the country that are compliant with Good Manufacturing (GMP) principles and thus suitable for cannabis processing.

Althea is planning an $11 million growing and processing facility across four hectares leased at Skye, in Melbourne’s outer east. Under the company’s somewhat ambitious timetable, the facility will be completed by the December quarter of this year and the first finished product will appear from June next year.

While a latecomer to the sprouting ASX cannabis cohort – the company listed in November last year — Althea is already supplying the local market with material sourced from its 25 per cent Canadian shareholder Aphria.

Acknowledging doctors as the true gatekeepers of cannabis therapies, Althea created a web portal called Concierge to enhance the medicos’ and patients’ understanding of the largely unapproved treatments, currently available only under the Therapeutic Goods Administration’s Special Access Scheme.

So far, 354 patients have been prescribed Althea products across a network of 109 doctors, mainly for pain but also for mental health conditions including post traumatic stress disorder and anxiety.

In keeping with the requirements of the Special Access Scheme, these patients have failed orthodox treatments. Given the regulatory hurdles required, the current market is minute: Althea adviser Pac Partners estimates 2832 patients were approved for cannabis prescriptions at the end of 2018, with 2178 of them actually treated.

Based on the Canadian experience, Althea adviser Pac Partners estimates an eventual Australian market of 250,000 patients.

Althea intends its imported Canadian supply to be a stop-gap measure, ahead of commissioning of the Skye facility that’s slated to produce 300 kilograms a year (with an eventual capacity of 20,000 kg).

Given the low local demand relative to likely supply, forging export markets will be crucial to achieving economies of scale.

In this respect Althea is planning an entrée into Britain, which last year legalised medical cannabis and which has similar patient access arrangements to Australia.

“There’s no doubt the UK will be a bigger market than Australia,” Fegan says.