It was only a matter of time before the fragility of the current US political and economic situation was laid bare. A situation that has translated directly into a solidly recovering gold price. Speculation around the health of the US bull market, the future path of interest rates, international trade and the future of Trump himself – has seen gold surge by more than $100/oz since mid-August. 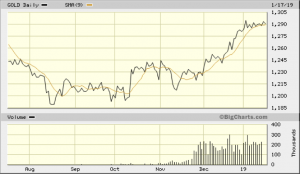 Gold’s best friends will ultimately prove to be the world’s debt-addicted central bankers. Like a bunch of stimulant-addicted athletes looking for their next hit, central bankers became enormously dependent on monetary stimulus in the wake of the GFC. What started out as a post-meltdown means of avoiding international economic catastrophe, has now morphed into what is a lingering and dangerous hangover.

We’ve already witnessed the negative consequences of the economic stimulus already – with savers and retirees punished by ultra-low interest rates, together with a distortion of market prices that has encouraged destabilizing financial speculation and caused dangerous asset bubbles to emerge – not to mention escalating debt.

The US Debt Nightmare

Markets and investors have so far failed to fully appreciate the hellish scenario that awaits as far the US economy is concerned, with future generations left with an enormous debt mountain that requires servicing. The US national debt now measures more than $21 trillion and is greater than the economic output of the entire country.

The graph below shows the amount of federal debt outstanding over the past 40 years. As is clearly evident, federal debt exploded upwards with the financial crisis of 2008 and began its meteoric ascent to more than $19 trillion outstanding. 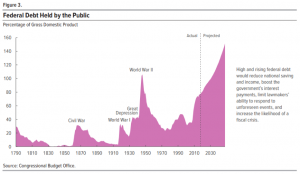 In the United States, interest rates have been controlled for some years now through the actions of the Federal Reserve. At the very same time that the federal deficit was soaring, the Federal Reserve was quite literally creating trillions of dollars out of nothing and using this new money to purchase U.S. debt – not directly from the US government, but through the markets.

In doing so, the Fed has taken control of interest rates – in the short, medium and long-term in the United States. Thus there is nothing fortuitous or ‘lucky’ about the current low interest rate environment – they are a direct result of governmental policies. And if rates continue to rise, the US economy will have a major problem on its hands.

After a lengthy period of holding the federal funds rate close to zero in an effort to help the economy recover from the financial crisis, the Federal Reserve began increasing its target rate in December 2015.

Just prior to Christmas, the Federal Reserve announced an increase in the federal funds rate to between 2.25% and 2.5% – the fourth rate hike during 2018 – and the seventh subsequent increases since the Fed began hiking rates in December 2015.

The Federal Reserve sets policies to foster conditions that they believe to be consistent with achieving maximum employment, stable price and moderate long-term interest rates. Setting the target for the federal funds rate (the interest rate at which commercial banks lend to each other overnight) is therefore an important tool for the bank. The target rate is the benchmark for Treasury bills and other short-term interest rates. Expectations about those short-term rates, combined with other factors, affect the longer-term rates that are applied to consumer borrowing such as for mortgages, car loans, and student debt.

The continued tightening of monetary policy should be viewed as a positive indicator of economic strength, as it demonstrates the bank’s confidence in the progress the economy has made toward its economic objectives. However, higher short-term and long-term Treasury rates mean that the federal government’s borrowing costs will also rise, thereby generating significant consequences for the budget and the national debt. 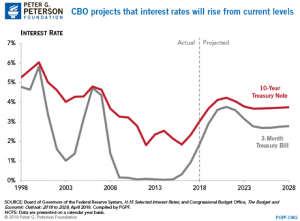 Under current law, the Congressional Budget Office (CBO) projects that net interest costs will nearly triple over the next 10 years, soaring from $315 billion in 2018 to $914 billion in 2028 – totalling $6.9 trillion over the period. 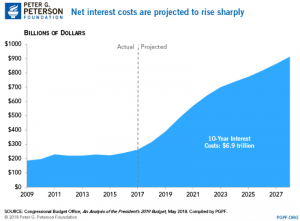 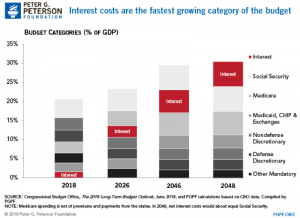 Ballooning interest costs threaten to crowd out important public investments that can fuel economic growth in the future. In its most recent long-term budget report, CBO estimates that by 2048, interest costs are projected to be more than double what the federal government has historically spent on R&D, non-defence infrastructure, and education, combined. 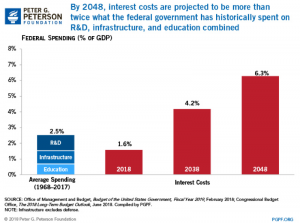 The long-term fiscal challenges facing the United States are serious. Deficits are on the upswing again and therefore will be adding significantly to national debt.

Congresses and Presidents of both parties, over many years, have avoided making the necessary tough budgetary decisions to put it on a long-run, sustainable path. In fact, the tax cuts legislation that was enacted By President Trump during December 2017 will make it even more difficult to achieve that sustainable path.

However, as interest costs rise and with the deficit slated to reach $1 trillion as early as this fiscal year, it is becoming even more vital for US lawmakers to act on the growing debt, in order to ensure a stable economic future – not only for the US, but internationally as well.

This is yet another bullish factor for the gold price. There are already a host of factors that are supportive of gold, not the least of which is the ongoing turmoil directly related to the Trump presidency. Trade concerns with China and the rest of the world, the ongoing Government shutdown in the US, equity market volatility, and the mass resignations/firings taking place amongst Trump’s senior hierarchy, are all major issues of concern. And things have the potential to deteriorate further in early 2019, with the Democrats now assuming control of the House of Representatives and former Trump lawyer, Michael Cohen, set to testify before Congress about his past dealings with Trump. There is likely to be no end to the volatility.

This is of course great news for gold and I believe the gold price will continue its bullish price pattern that began in mid-August 2018. I believe prices will consolidate between $1250 and $1350 during CY 2019.