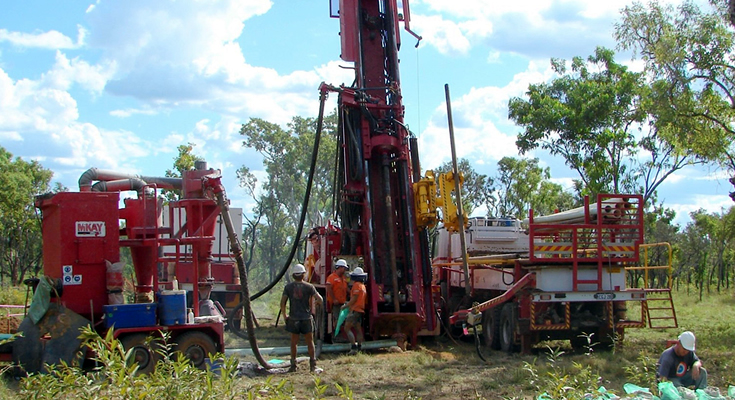 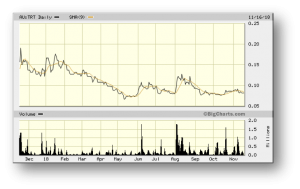 Thick high-grade intersection in latest hole MHDD0043 at Mt Hardy is the deepest and most northern mineralised interval to date (and it’s extremely significant), extending the mineralisation to 450m depth from surface and to more than 370m of continuous dip extent.

We introduced TRT to our coverage universe during November 2017 at a price around $0.115, with the stock since trading both above and below our initiation price. TRT is a spin-off from TNG Ltd (ASX: TNG) and maintains a portfolio of base metal projects (primarily zinc-lead) at varying levels of exploration advancement. The company’s flagship exploration asset has become its 100%-owned Mt Hardy Copper-Zinc Project in the Northern Territory, where a series of recent outstanding high-grade drilling results with significant mineralised widths, have clearly defined a continuous mineralised zone over a continuous dip extent of more than 370m. Drilling will continue and with further good results the company could potentially be in a position to release a maiden JORC compliant Resource estimate during H1 2019.

As a follow up to our recent coverage of TRT, the company has reported that the deepest and northernmost drill-hole so far at its 100%-owned Mt Hardy Copper-Zinc Project in the Northern Territory, has returned spectacular high-grade assay results. 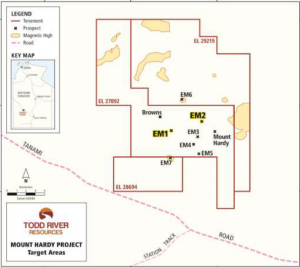 Furthermore, several results had spectacular zinc grades of more than 30%, with an interval of 4.53m returning 36.9% combined base metals. The latest assay results confirm that high-grade and high-tenor mineralisation persists to significant depths at the EM1 target, marking a pivotal moment in the ongoing exploration program at Mt Hardy Project. 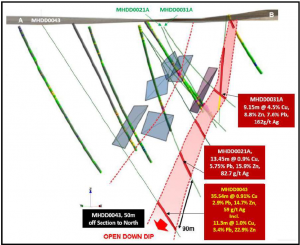 Figure 2: Oblique Cross-Section looking to the north-east showing the extent and continuity of the mineralisation at the EM1 Prospect.

The thick, high-grade intersection within hole MHDD0043 is the deepest and most northern mineralised interval drilled at Mt Hardy so far, extending the mineralisation to 450m depth from surface. This key step-out hole has extended the mineralisation to more than 370 metres of continuous dip extent, as well as almost 50 metres to the north of previous drilling.

The result also further validates the use of down-hole geophysics as an essential exploration tool at Mt Hardy. It has resulted in the intersection of a thick zone of high-grade, high-tenor base metal mineralisation exactly where the down-hole EM predicted.

It is now reasonable to assume that the exceptionally high grades and tenor of mineralisation persist to significant depths, as well as continuing further to the north.

TRT advises that drilling will continue through November and early December at EM1 as planned, in line with the Phase 2 program announced during September. Down-hole geophysics will be completed in two campaigns, with the first beginning this week and the second in early December.

GAP geophysics is also completing a tightly-constrained Moving Loop EM survey (MLTEM) along strike, both north towards the Browns Prospect (where previous drilling intersected 13m @ 1.17% Cu and 1.9% Zn in 2013) and south from EM1. This survey is planned to identify any additional targets for drilling during Q1 2019.

Following the completion of the phase 2 program before Christmas, additional drilling will be planned and will commence in early 2019.