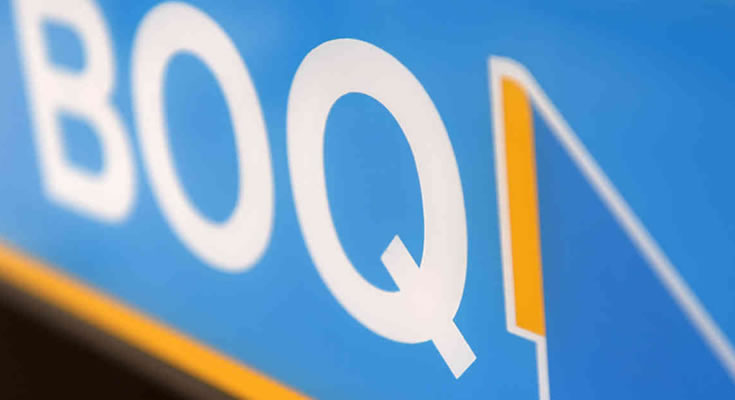 No special dividend for shareholders in the Bank of Queensland this year after the Brisbane-based bank revealed a less than stellar 2017-18 full year result yesterday.

A year ago the bank announced the special payment after APRA has confirmed the bank’s solid capital base and outlook.

This year the 38 cents a share normal final payout to shareholders has been maintained, making a steady 76 cents a share for the 12 months.

The 2017-18 performance justified the conservatism of the board – the ban revealed a 2% dip in cash profit to $372 million, as its bottom line was affected by higher costs and a fall in income from bank fees and insurance.

BOQ, which reports its results over a financial year ending in August, said banks were facing a “difficult” environment as loan growth slowed, and its non-interest income declined sharply.

But the bank revealed that its net interest margin rose 5 points in the year to 1.98% as it pushed up interest rates on home loan and other products faster than the rise in funding costs.

Despite the weaker result the shares jumped 3.5% to $11.55 more in relief from investors that there were no nasties in the figures, but then came off in the afternoon to end the day at $11.01.

The result was made to look better by a $41 million drop in the bank’s impairment charge for the full year.

The bank’s CEO, Jon Sutton said the evolution of BOQ has continued throughout this financial year.

“BOQ has transformed into a resilient, multi-channel business that is geographically diverse and serves a broader range of customers. This is a result of the clear and consistent strategy we have been implementing,” he said.

“Loans originated by BOQ Specialist and Virgin Money Australia now account for 20 percent of the loan portfolio and we have grown the BOQ Business division to a point where it now contributes almost 60 percent of our cash earnings.

“We have continued to manage the business for the long term, investing in the digitisation of our operations and modernising our technology infrastructure,” Mr. Sutton said.

He said that despite the significant headwinds facing the sector, underlying revenue growth of two percent was achieved through lending growth and an improvement in net interest margin.

“We have managed for the environment we are faced with, prioritising margin over growth,” Mr Sutton said.

“Our lending growth was funded by an improved mix of deposits through our branch network. Pleasingly, expenses were contained while continuing to invest in the business,” he said.

Total lending growth of $1.5 billion for the year was driven by above-system growth in BOQ’s targeted niche commercial lending segments, as well as increasing the mortgage book for both Virgin Money Australia and BOQ Specialist.

The bank revealed that it had taken $16 million in increased amortisation charges in the 2017-18 result to allow for stepped up investment in the current year. This the bank said will reduce the impact on future earnings.

“Our focus on relationship banking through industry specialists is resonating with and being welcomed by our customers,” he said.

Mr. Sutton said that this provided the flexibility to consider how best to deploy capital for long-term shareholder returns.

“We have chosen to utilise our strong capital position to invest for the future and set the business up for long-term success,” he said.

“We are increasing capital expenditure in FY19, with the focus of this investment on enhancements to our digital banking platforms and customer experience,” Mr. Sutton said. That saw the $16 million of amortisation charges taken in this year’s result (which made it look a little lower than it would have been.