It’s interesting then to consider how some of the bigger institutions are coping with low rates and how they are changing their asset allocations to try and improve returns, while limiting risk. Watching these larger corporations with dedicated research teams and global asset managers, helps identify trends that smaller investors can replicate.

The primary take away from a look at the big guys, is a shift in portfolio allocation away from equities and government bonds to higher allocations to corporate bonds and cash.

Over the last year, the Future Fund worked to rebalance its portfolio and lower risk, reducing equities from 33.8 percent, down five percentage points to 28.8 percent – with only 6.3 percent allocated to the domestic market. On the other hand, cash and debt securities rose from 29.3 percent to 32.3 percent. Debt securities include corporate bonds as well as mortgages, high yield credit and other corporate loans.

The 4.8 percent return the Future Fund earned last year is excellent given the state of the market. To put low rates into context, this week a 30 year Australian government bond was issued with a yield of just 3.25 percent, not much more than you would earn on a one year term deposit.

You might ask yourself, who would invest for such a long time at such low interest? But investors lined up like a Myer Boxing Day sale. The issued raised $7.6 billion from global and domestic investors. To add a bit of context, the current German 30 year government bond yield is 0.68 percent and Swiss bond over the same term just 0.07 percent.

Last week Australian Prudential Regulation Authority (APRA) insurance chief, Geoff Summerhayes reinforced the lower for longer interest rate theme in an address to the nation’s insurance companies. He urged them to resist “the chase for yield” by shifting into “sub grade” investments.

Insurance companies are often big investors, putting aside funds to payout against future claims. They need to preserve capital and maximise return without taking on exorbitant risk.

QBE, like the Future Fund has altered its US$25.7 billion portfolio allocation over the last six months, reducing the very lowest risk and lowest return holdings of short term money and government bonds and increasing its allocation to higher yielding corporate bonds, which now make up 54.7 percent of QBE’s portfolio.

Short term money, including term deposits and bank bills, and government bonds declined a significant 7 percent from 37.8 to 30.8 percent in the half year to 30 June 2016, but the allocation to corporate bonds jumped 8.3 percent over the same time. 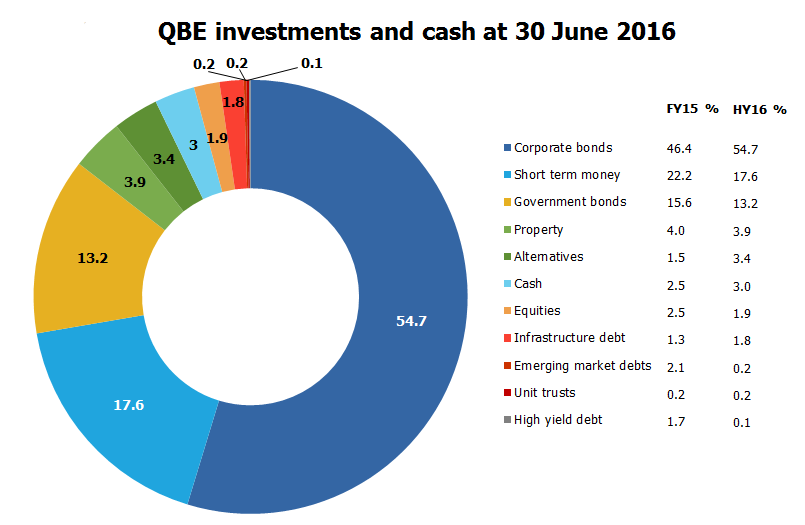 On a much grander scale, the massive French insurer AXA SA that has a whopping €760 billion in investible assets has also been increasing its allocation to corporate bonds and other debt instruments. In the half year to 30 June 2016, AXA SA increased its investment in debt instruments from 56.6 percent to 60.6 percent of its total portfolio.

Back in Australia, at FIIG, we’ve witnessed mid level corporations and Not For Profits reassessing portfolio allocations.  Many want to keep a low risk investment profile but understand term deposits paying less than 3 percent are not working hard enough.

It’s not surprising to find all manner or organisations becoming frustrated with the current investment environment – it’s hard to keep it in mind, but the current environment of negative interest rates and exceptionally low growth is not typical and the majority of investment committees – not to mention the set objectives of those committees – were founded on the basis that investment markets would be expected to produce much higher returns than they do now.

How do they cope? They are reducing very high allocations to cash and transferring it into floating rate corporate bonds. The bonds marginally increase risk but offer 1 to 2 percentage points more than term deposit rates. Floating rate bonds virtually eliminate interest rate risk and prices are relatively stable.

One mid sized company, on the lookout for acquisitions, changed its conservative portfolio mandate where all corporate bonds had to be ‘investment grade’ to allow up to 10 percent to be invested in sub investment grade or non rated corporate bonds where returns of 6 to 7 percent are available. The theory being, a small allocation to a broad cross section of high yield bonds would boost overall returns but limit risk.