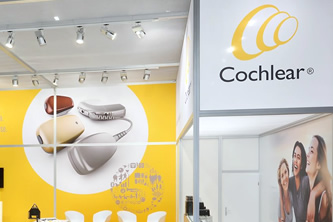 A strong first half enabled the company to reaffirm full year earnings guidance of $100 million.

The company said this was driven by “record cochlear implant (CI) unit sales for the half year of 7,939 units”, an increase of 22 per cent over the first half of 2006.

Sales revenue from the cochlear implant system product range rose 31 per cent to $240.3 million while sales in the Bone Anchored Solutions division rose 24 per cent to $30.4 million.

CEO, Dr Chris Roberts said that while Europe and America currently make up most of its revenue, Asian sales were rising.

“It is at the same as it was in Europe three years ago,” he told a tele conference. “Asia-Pacific is behind, but I would not be surprised if at the end of this year, Asia-Pacific had out grown America.

“We are still growing there quite strongly.”

Globally, Cochlear claims 70 per cent of the hearing implant market.

The company said Earnings Before Interest and Tax amounted to $73.6 million, up 17 per cent over the first six months of 2006.

Excluding a one-off waiver from the Commonwealth Government on royalty payments of $5.7 million ($4.0 million after tax) in the first half of last year, EBIT was up 28 per cent in the latest half.

The company has declared an interim dividend of 55 cents a share.

The company said in a statement that “Core earnings of $52.8 million was in the context of Cochlear’s full year guidance for F07 of at least $100 million core earnings.

CEO Roberts said “This is an excellent result with core earnings of $52.8 million comfortably within our full year guidance of $100 million issued in August 2006 and confirmed at the AGM in October.”

QBE Thinking the Worst is Behind it

AMP Carrot Bigger than its Stick